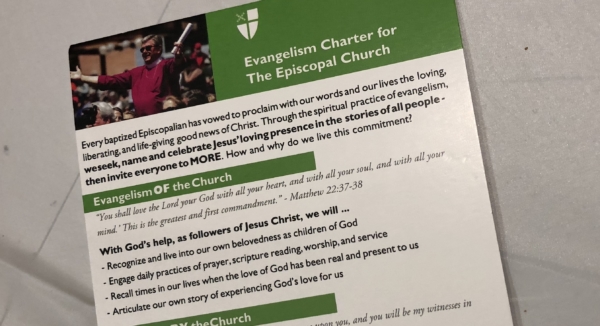 Postcards with the Evangelism Charter were distributed in the House of Deputies before the vote on A029. Photo: David Paulsen/Episcopal News Service

[Episcopal News Service – Austin, Texas] It never inspired the fiery passion of the debates on marriage or Israel-Palestine. It never threatened to upset the Episcopal Church’s status quo like the debates on prayer book revision.

But evangelism was a constant theme at the 79th General Convention – and not only at the large revival July 7 when Presiding Bishop Michael Curry preached to a crowd of thousands.

The bishops and deputies who gathered here from July 5 to 13 embraced their inner evangelists in ways subtle and grand throughout the church’s triennial gathering. They engaged people on the street in conversations about faith. They pledged to follow Curry’s “Way of Love” when they return home. And they approved a three-year church budget that allocates $5.2 million for evangelism, including $3 million for redeveloping declining congregations and starting new congregations, also known as church plants.

The Rev. Stephanie Spellers, the presiding bishop’s canon for evangelism, reconciliation and creation care, has felt a lot of momentum since the last General Convention, starting with simply reclaiming the word “evangelism.”

“At this convention, what we’ve said is we’re taking it further and figuring out how is it that we as Episcopalians share and celebrate the good news of Jesus, with no shame, but also in a way that feels uniquely Episcopalian,” Spellers said in an interview with Episcopal News Service on July 12, the day before the end of General Convention. 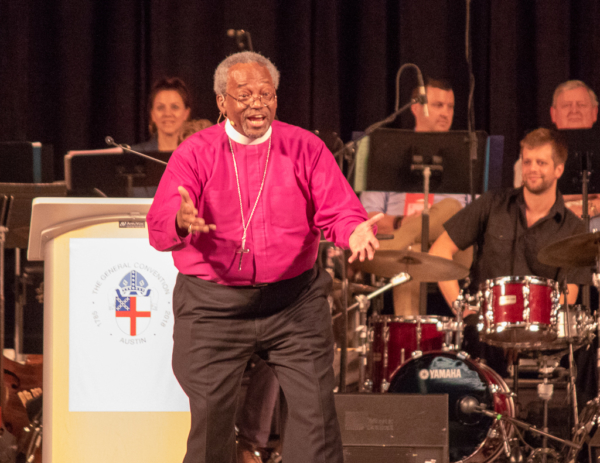 Curry’s revival sermon set the tone for the work to come, with a message of love’s power to bring people together.

“Love heals the wounds. Love can lift us up. Love is the source of setting us free, and it is the root source of life,” Curry said at the Palmer Events Center, across the river from the Austin Convention Center where General Convention was held. “In fact, the truth is, the only reason we’re here is because of love,” Curry said.

Evangelism was one of three priorities set for the church three years ago by General Convention, along with racial reconciliation and care of creation. Curry took on the self-described role of “chief evangelism officer” and has preached at a series of revivals in dioceses around the church since February 2017.

The call to evangelism also has been taken up by church planters in community after community thanks to the Episcopal Church’s increased investment in new congregations and ministries over the past several years. General Convention approved $1.8 million for church plants and Mission Enterprise Zones in the 2013-2015 triennium, and $3.4 million was allocated for such ministries from 2016 to 2018.

The main church planting resolution assigned the Evangelism and Church Planting Committee, A005, initially called for $6.8 million in total spending on that network over the next three years to build on recent successes of these “holy experiments.” The committee recommended $5.8 million, though the final budget only sets aside about $4.3 million for the church-planting network, said the Rev. Frank Logue, a deputy from Georgia and chair of the committee.

The final figure is hardly a disappointment for people in the church, like Logue, who have fought to make evangelism a priority.

“The budget gives us everything we need to continue that movement,” Logue, canon to the ordinary in the Diocese of Georgia, told ENS. The spending rightly emphasizes the support system needed to enable new communities of faith to grow and thrive, he said. It includes money to provide potential church planters with skills assessments, coaching and regular follow-up meetings with church staff members.

“At the end of the day, money doesn’t get churches planted like know-how does,” Logue said.

The budget also includes $380,000 over three years to create a churchwide staff officer to oversee evangelism, taking over responsibilities that had been covered part-time by three different contract workers.

Spellers thinks the person who fills that position will take the lead in following through on Curry’s “Way of Love,” seven practices that provide a Rule of Life that all Episcopalians are encouraged to adopt.

Curry, in his sermon July 5 at the opening Eucharist of General Convention, said the “Way of Love” was developed to encourage Episcopalians to embrace more fully their role in the Episcopal branch of the Jesus Movement. The response has been overwhelmingly positive, Spellers said, and her team printed and distributed more than 100,000 cards with details during General Convention.

The budget includes $100,000 in small evangelism grants, a renewing program outlined in Resolution A030.

Another evangelism resolution, A006, was rejected by the committee. The resolution sought to collect additional demographic data on church leaders involved in church planting and ministry development as a way to encourage those ministries to greater reflect the communities they serve. Concerns were raised about how the data might be used in determining funding and whether the data’s benefits would merit the extra work.

Bishop Nicholas Knisely of Rhode Island, who chairs the bishops’ committee on evangelism, said he wishes more people had come to testify about the committee’s resolutions and engaged more directly with the questions. 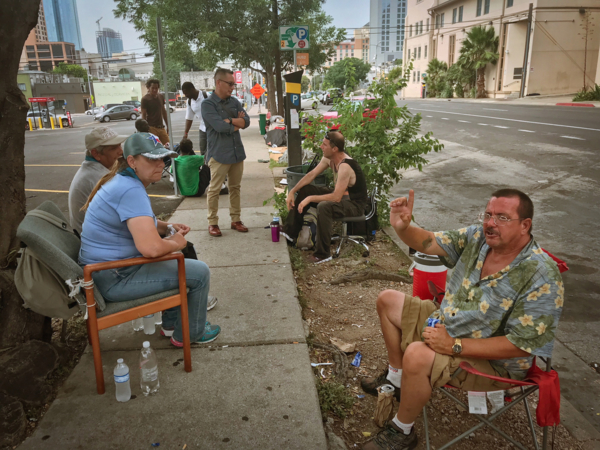 Three members of the Evangelism and Church Planting Committee met and talked with this group of people who have formed a sidewalk community next to the Episcopal Church-owned parking lot on Trinity Street in Austin. The Rev. Alex Montes-Vela, deputy from Texas, stands on the sidewalk with arms crossed. Photo: Frank Logue

“I think everyone wants to be an evangelist. I don’t think we are keeping our eyes on that ball,” Knisely said. He was referring to other major issues at this General Convention that drew much more attention, such as same-sex marriage and liturgical reform.

Even so, he was heartened by the emphasis on evangelism at this General Convention, and early on, he and Logue led other committee members in some street evangelism. On July 4, when the committee’s business for the day was done in the JW Marriott, the members went outside the hotel, two by two, and practiced evangelism in any way the spirit led them, including talking with the people they encountered in downtown Austin.

Logue held up the vote to approve A029 as an important next step for the church. That resolution adopted what is known as the “Evangelism Charter,” outlining how and why Episcopalians vow “to proclaim with our words and our lives the loving, liberating and life-giving good news of Christ.”

Logue, who helped distribute cards outlining the tenets of the charter to all deputies before the vote, said the endorsement of a document may not sound like groundbreaking work, but it is important to make clear to all Episcopalians what the church means when it talks about evangelism. That talk doesn’t end in Austin.