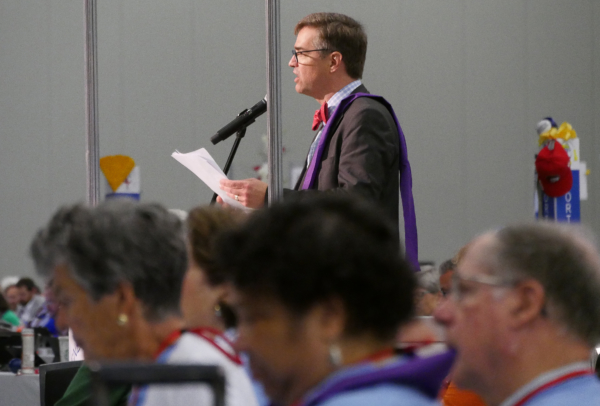 California Deputy Christopher Hayes explains his floor amendment to Resolution B012 during debate on July 9. Hayes is wearing purple in honor of Purple Scarf Day, which calls for more women in the episcopate. Photo: Mary Frances Schjonberg/Episcopal News Service

[Episcopal News Service – Austin, Texas] The House of Deputies overwhelmingly endorsed a heavily amended resolution July 9 aimed at ensuring that all Episcopalians can be married by their priests in their home churches.

Resolution B012, a carefully crafted compromise that its final proposers hope will be accepted by both houses of convention, gives full access to two trial-use marriage rites for same-sex and opposite-sex couples approved by the 2015 meeting of General Convention (via Resolution A054).

The deputies voted by orders and the results were:

Fifty-six votes in each order were required for passage. Divided votes are recorded when the clergy or lay members of a deputation split their votes between yes and no.

The resolution, as passed by deputies, provides for: 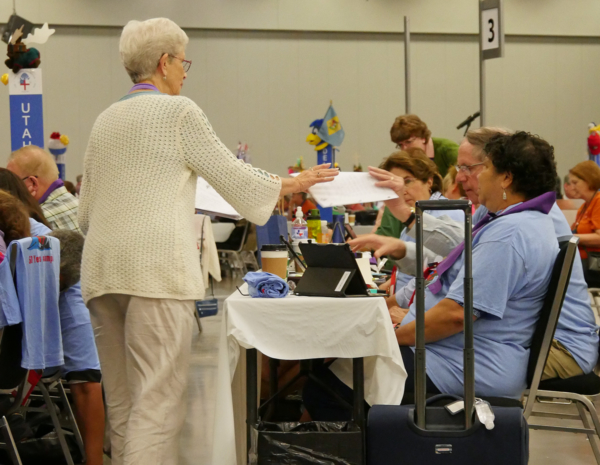 A House of Deputies page collects the written version of the Diocese of Southern Virginia’s vote by orders on Resolution B012. During votes by orders, deputies vote on paper ballots and then deputations calculate the results and cast their vote electronically. Photo: Mary Frances Schjonberg/Episcopal News Service

The resolution also eliminated the original B012’s call for a Task Force on Communion across Difference. Formation of such a group is now being proposed in a new resolution, A227.

California Deputy Christopher Hayes, whose floor amendment formed the basis of the version of B012 that the house adopted, told the deputies during debate that it was “written in consultation with a number of people who have labored for the last two triennia on how to honor the theological diversity of this church on the issue of marriage while ensuring that liturgies for marriage of same-sex couples can be used as widely as possible.”

In addition, he said, the amendment makes clear that the canonical authority to use the liturgies rests with the rector or other clergy in charge of a congregation.

“Our tradition had long recognized that the rector has the authority to use any liturgy authorized by General Convention,” he said.

Hayes suggested that convention could do nothing less but honor both the consciences of those bishops who refuse to approve use of the rites “and the needs of same-sex couples for an equal place in this church.”

Debate on the resolution, which spread over two days, was at times passionate and at others sober.

The Rev. Calvin Sanborn, deputy from Maine, told the house July 8 that he has performed many marriages in the last three years, many of them for same-sex couples. Some were young people “just beginning their journey together,” and he has solemnized the marriages of “many, many couples who have been together for decades and are finally able to have their loving relationships affirmed by the church.”

“These are not just parishioners who came to the church to be married in a beautiful place and then simply disappear, as is often the case in a coastal Maine church,” he said. “These are faithful couples who have not only committed their lives to each other, but also to Christ and to the work of God in the world.”

Sanborn said he supported B012 as a compromise, although he longs for a time when marriage for same-sex couples will be included in the Book of Common Prayer and “no longer be second class.”

The Rev. Susan Russell, Los Angeles deputy and long-time leader in the effort for full inclusion of LGBTQ people in the life of the church, supported B012 because it “will move us beyond the seemingly intractable challenge of living together as a church where the sacrament of marriage has been authorized for all couples in the Episcopal Church is irreconcilable with the theological consciences of some members of the Episcopal Church.”

Russell told the deputies that they should be clear that the resolution contains “costly compromises that come with very real pain.” Some will be pained by a resolution, she said, that falls short of giving “full and equal claim” to all the sacraments to baptized LBGTQ persons. Others will “experience this action as a bridge too far away.” The question the convention faces, she said, is “whether the gift of walking together into God’s future as members of the Episcopal branch of the Jesus Movement is worth the painful compromises we are mutually being asked to bear.”

The next speaker, Dallas Deputy William Murchison, vehemently disagreed, saying the convention was being asked to “throw out a historic Christian understanding and supplant it with a new one, untested, unproved, but now, all of the sudden, necessary to be believed and practiced.” 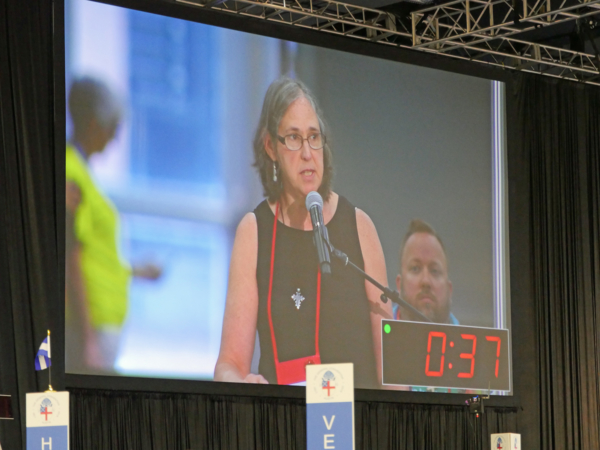 Deputy Mary Jones of Albany agreed, saying that such a compromise was, indeed, too much “and would not serve our church well.” Passing B012 will “ultimately lead us to division” because of its underlying difference in the interpretation of Scripture.

B012 began in response to Resolution A085 from General Convention’s Task Force on the Study of Marriage, proposed in part to find a way for Episcopalians in eight dioceses of the church’s 101 domestic dioceses in which the diocesan bishop refuses to authorize use of the trial-use marriage rites for same-sex and opposite-sex couples.

Five Province IX diocesan bishops and one retired bishop objected and warned the task force in a statement that, if convention makes changes about marriage that would force them “to accept social and cultural practices that have no biblical basis or acceptance in Christian worship,” the action would “greatly deepen the breach, the division and the Ninth Province will have to learn to walk alone.” The bishops of Colombia and Puerto Rico, also dioceses in Province IX, did not sign the statement.

Long Island Bishop Lawrence Provenzano, together with Pittsburgh Bishop Dorsey McConnell and Rhode Island Bishop Nicholas Knisely, proposed B012 the week before convention as an alternative.

The original B012 would have continued trial use of the two trial-use marriage rites without a time limit and without seeking a revision of the prayer book. The resolution proposed that access to the liturgies be provided for in all dioceses. However, in dioceses in which the bishop will not authorize the rights, congregations wishing to use them could request and would receive Delegated Episcopal Pastoral Oversight (DEPO) from another bishop of the church who would provide access to the liturgies.

The pastoral oversight called for in the amended B012 is not DEPO, according to Hayes. The DEPO process, which is not part of the canons of the church, is meant only for congregations whose relationship with the bishop is broken on all levels. Not all congregations wishing to use the rites are in that level of conflict with their bishop, he said.

After two hearings on A085 and B012 on July 5, the committee crafted a new version of the latter resolution. It was that version that Hayes moved to amend to clarify several points.