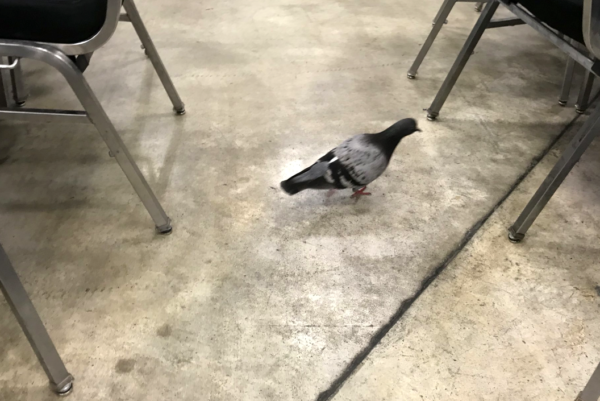 The General Convention Pigeon is sported on the House of Deputies floor in this photo tweeted by Rev. Diana L. Wilcox.

[Episcopal News Service –Austin, Texas] It arrived early to the 79th General Convention and soon was swooping through the House of Deputies and strutting through the neighboring Exhibit Hall.

At times it is elegant trickster; at others it is a small scavenger.

On July 7, the pigeon attempted to join debate in the House of Deputies, stepping to the counter at Microphone 2. Apparently, it was not aware that those wishing to be recognized by the Rev. Gay Clark Jennings, the deputies’ president, need to insert their “smart cards” into their voting devices to enter the queue of debaters.

@HODPlatform There is a deputy who wishes to speak at microphone 2. pic.twitter.com/FxatNSymaJ

I tried. I really did. But it was hard to insert the smart card without opposable thumbs! https://t.co/msQyxJBNVg

It has no such equipment because it has not acquired the proper credential. It was reportedly wandering around in the convention registration area later on July 7, perhaps attempting to secure official permission.

Still, it is the only creature with full access to the house without the needed red credential holder around its neck. This seems to be attributable to its powers of propulsion.

However, it has acquired something potentially much more valuable than #GC79 credentials: the Twitter handle @gc79pigeon and, as of the writing of this story, 608 followers. (The bird follows six other Twitter accounts, including @episcopal_news.)

General Convention Pigeon, who claims to be a “Nested Episcopalian” similar to the human designation of “Cradle Episcopalian,” appears to be much gentler than Austin’s grackles, which have been dive bombing people on foot and on bicycles, sometimes landing on their heads (including this reporter’s).

In an interview with Episcopal News Service during July 7 and 8 (the bird is busy) via Twitter direct message, @gc79pigeon said it hopes it is “part of the movement of the spirit that brings something to keep people relaxed, laughing, and in good spirits when things get tense.”

The bird cited the Diocese of Fort Worth’s Deputy Bingo and a number of Flat Jesus cutouts making their way around the Exhibit Hall. The fact that the deputies are aflutter over the General Convention Pigeon is reminiscent of the house’s Bonnie Ball game during the 77th General Convention in 2012.

The bird’s sense of the passage of time is apparently unlike that of humans. During the interview, it professed to be young. “I’ve been an Episcopalian since I was a chick,” it pecked. “Now, given that was only a few months ago, that’s nowhere near the experience of everyone gathered at General Convention. But, when measured in bird years? Yes. Nested Episcopalian.”

The bird appears also to be visiting members of its extended family.

OMG SARAH IS HERE. You know what they say about birds of a feather… they look for stale donuts together. 👀 🍩 🐦 https://t.co/f8yogHy2MG

Other pigeons roost in the hall now occupied by the House of Deputies. While the convention was loading into the space, the resident birds made no attempt to leave. On the rare occasions when the deputies are silent, the faint sound of baby pigeons can be heard.

“There are plenty of fellow pigeons around the convention center,” the bird advised ENS. “Don’t focus on which one I am. A single pigeon with a platform has a duty to speak for all pigeonkind.”

Some of the resident pigeons appear to be fouler than the well-mannered @gc79pigeon fowl. They roost high in the rafters above the House of Deputies dais, and at times, rather than flying to the restrooms, some have been “commenting” on a table set up precariously close to the equipment that runs the deputies’ voting system.

“As to who pooped on the voting table — you might think that we are responsible. But I couldn’t possibly comment,” General Convention Pigeon messaged via Twitter on July 8 after flying to Taylor, Texas, and back, for a convention prayer service outside the T. Don Hutto Residential Center.

Although well-mannered and concerned about social justice issues, @gc79pigeon can be a bit cheeky.

Checking out some swag in the Exhibit Hall. Headline: Can pigeons wear a rochet and chimere? More at 11. #gc79 pic.twitter.com/s3aQwjjGZX

The @gc79pigeon visited us in booth #820 and is now off to help us spread the word that there ARE Religious Orders of Sisters in the Episcopal Church! #GC79 😁🐦 pic.twitter.com/d4Cgz0nChY

The bird reported that the best swag it has plucked out of the Exhibit Hall are some of the PopSockets, collapsible grips for cellphones that can double as a stand, that some exhibitors are offering. “Definitely makes pecking at a keyboard with a beak way easier,” it said.

The pigeon has been seen grazing in the House of Deputies for dropped snack food and the like. “For me, a stale donut on the floor was the true delicacy,” the bird revealed. In one of its tweets it asked for stale crullers or glazed donuts.

Yet, even as it has gained a certain amount of notoriety, @gc79pigeon knows where it ranks in the #GC79 stardom hierarchy. “I have NOTHING on Dinorah,” the humble pigeon tweeted, praising Curry’s interpreter Dinorah Padro.