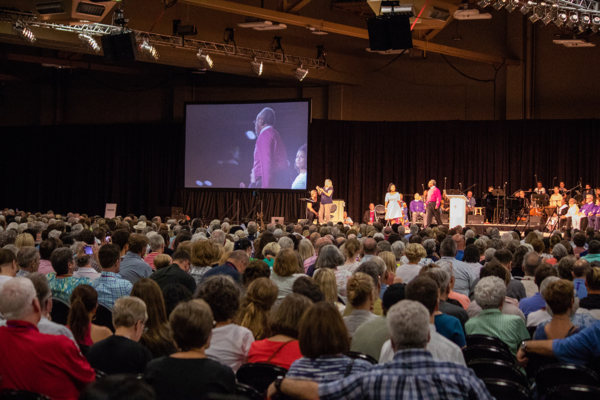 [Episcopal News Service – Austin, Texas] Presiding Bishop Michael Curry brought a rousing “God is love and gives life” message to Episcopalians and others gathered here during a revival, to standing ovation after standing ovation every time he told the crowd to live.

“The only reason to be born is to live,” said Curry. “God wants us to have life … God wants all of his children to have life… 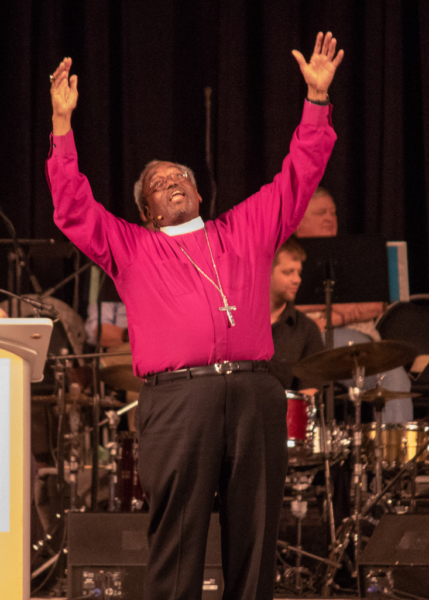 As proof, Curry offered the Gospel of John, throughout which Jesus makes clear the link between love and life. Curry cited chapter 4, “I am the water of life”; chapter 6, “I am the bread of life”; Chapter 10, “I have come that you might have life”; and chapter 14, “I’m the way the truth and the life.”

In John 21, the risen Jesus who ask Peter three times, “Do you love me?” Jesus asks Peter the question for every time Peter denied knowing Jesus the night before his crucifixion. Through his questions, he demonstrated the way of love.

“God is love. And guess what, that’s the reason we are here,” he said.

In addition, 26,747 individual viewers took part in some or all of the revival service online, and the revival video showed up on the Facebook feeds of 79,149 users.

One has to lay down selfishness, which is akin to sin, in order to follow Jesus, Curry said.

“The older I get, the more I am convinced that we waste a lot of time in life on stuff that doesn’t give life. And, some of that’s human; we’re human … but at the end of the day, we’ve got to live, we’ve got to live in world where little children are not separated from their parents at our borders,” he said to rousing, sustained applause.

The text of the presiding bishop’s sermon is available here.

The 79th General Convention is underway nearby at the Austin Convention Center through July 13 in the Diocese of Texas.

“Lord, send a revival,” said Texas Bishop Suffragan Jeff Fisher in the service’s opening acclamation. “And let it begin in me,” roared the crowd in response.

Evita Kristlock was in the very last row singing and clapping along to the warm-up music as the main event was about to get underway. “I used to be a youth coordinator, so EYE is quite like this,” she said.

Kristlock is a lay leader who worships at Cathedral of St. John the Evangelist in Spokane, Washington. She was joined by other members of the Diocese of Spokane, all wearing purple shirts with the message “Creative Compelling Witness” on the back. 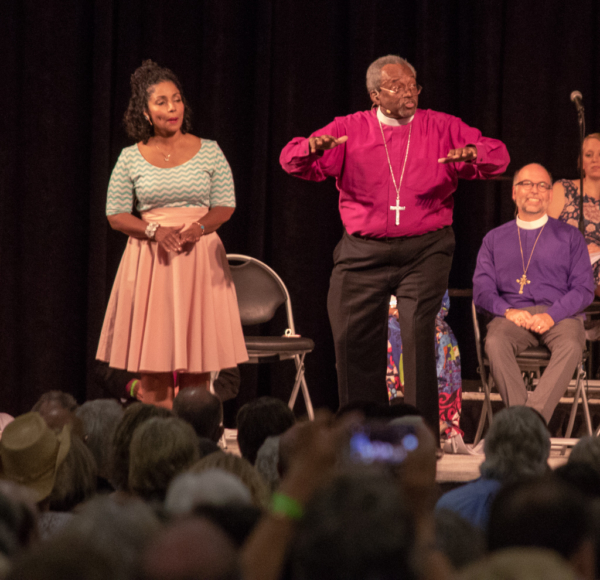 They weren’t the only ones singing and clapping, as the center filled with raucous sound. The single word “Revival” was displayed on giant screens to the left and right of the stage.

“Is anybody here looking for a revival?” the praise band sang from the stage as thousands cheered their approval, most of them on their feet.

Immediately before Curry began preaching, Sandra Montes of the Diocese of Texas brought down the house with “Montaña.” “Esa montaña se movera,” or “the mountain will move,” she sang.

“Let the whole church say amen,” said Curry, as he prepared to preach his sermon, joking that it’s hard to preach when he was the only thing standing between the crowd and a barbecue. Following the revival, the Diocese of Texas hosted a Texas-style barbecue.

The crowd, however, didn’t move for the doors until Curry gave them the blessing and dismissed it. The energy remained high following the revival, as people made their way to the barbecue.

Someone needs to make sure the translator gets first dibs on food at the barbecue. She is a CHAMP for keeping up with Bishop Curry #gc79

“It was great, all the people, the presence of the Holy Spirit, the invitation to love and to live, and to look at what really living and really loving look like. Compassion, hope, realizing that there’s nothing with God that we can’t do,” said the Rev. Sandye Wilson, rector of Church of St. Andrew and Holy Communion in South Orange, New Jersey, in the Diocese of Newark.

“Bishop Curry is chief evangelist, so what he’s done is letting us understand that we’re all called to be, which is evangelists.”

Wilson, who has been a deputy 12 times and is former member of Executive Council, said she is helping at the Union of Black Episcopalians and Church Pension Group booths in the convention’s Exhibit Hall.

“It was awesome. It was fantastic,” Stefan Schuster said after the revival.

He and his wife, Periwinkle, are members of St. George Episcopal Church in Austin and have volunteered at General Convention through the Diocese of Texas. It has been a great experience meeting people from all over the world, Schuster said, and he has been impressed by the Episcopal Church’s diversity and spirit of welcome.

“Having that message echoed by the presiding bishop was really wonderful,” he said, as he, his wife and their two sons headed to the barbecue. “We’re a church of love.”

Following the sermon, a dozen prayer stations catering to English, Spanish and French speakers were opened so that people could open their hearts and make their prayers known.

Dixie Roberts Junk of Kansas City, Kansas, was among the revival-goers who prayed with clergy at the stations set up along the outer walls of the revival space.

This wasn’t her first Curry-led revival — she also attended the one held last year in the Diocese of West Missouri — but there was something special about this revival at General Convention, she said, from the singing and music to Curry’s uplifting sermon.

“There’s always something to take back that’s just the richness of our church,” she said.

Curry hosted his first revival in February 2017 in Pittsburgh, and has since held ones in Kansas City, Stockton, California, Waverly, Georgia, and San Pedro Sula, Honduras. The next revival is scheduled for Western Massachusetts in October.

The revivals are a dedicated series of gatherings that combine inspiring worship, compelling teaching, honest faith-sharing, intensified prayer, and some form of engagement with the mission of God – all for the sake of the spiritual renewal and transformation of people and of society.

Video of the entire Austin revival, which ran about two and a half hours, can be viewed on demand here.

— Lynette Wilson is a reporter and managing editor of Episcopal News Service. David Paulsen is an editor and reporter for ENS.