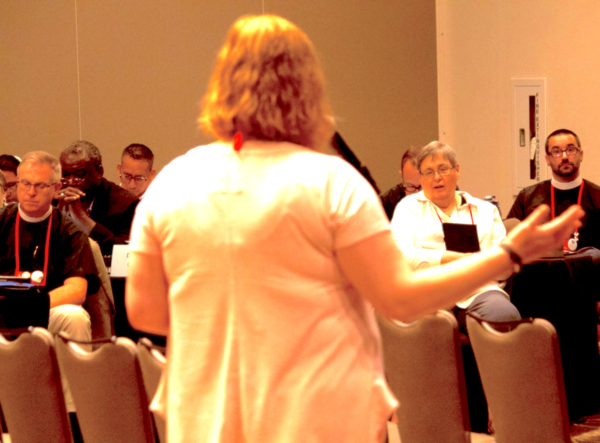 Maine Deputy Elizabeth Hall listens to questions during a joint hearing of the Evangelism and Church Planting Committee and the Congregational and Diocesan Vitality Committee. Photo: Mike Patterson/Episcopal News Service

[Episcopal News Service – Austin, Texas] A proposed resolution to increase the amount of data required on parochial reports faced skeptical legislative committee members on July 5 who expressed concerns that the changes might place too much additional burden on congregations.

When serving as priest at a small church, Knisely said, “we struggled” to get the report completed. “We’re adding to the burdens for churches that don’t have staff.”

Knisely is chair of the Evangelism and Church Planting Committee, which participated in a joint hearing with the Congregational and Diocesan Vitality Committee to glean testimony in response to similar and sometimes overlapping issues.

Questions over the parochial report arose from Resolution A053. It proposes that a new parochial report be developed that is “appropriate to the current context of the Episcopal Church including but not exclusive to multicultural congregations; aging populations; outposts of ministry in challenging economic contexts; and creative use of space and local engagement.”

A related resolution, A058, encourages the 79th General Convention to challenge all churches to complete their profile on the Episcopal Asset Map. The asset map is a free online service showing the location and array of ministries offered by Episcopal congregations, schools and institutions throughout the United States in dioceses that are participating in the project.

Both resolutions were proposed by the House of Deputies Committee on the State of the Church, which is charged with setting the form of the parochial report with final approval of the Executive Council.

“We decide what we measure, and what we measure tends to form what we value,” the Rev. Winnie S. Varghese, Diocese of New York deputy who chaired the Committee on the State of the Church, told the Episcopal News Service in an email.

“For the sake of data, it is good to measure a few vital things consistently for a long time, but the sake of our formation, and our self-understanding of what makes a great congregation, the (State of the Church) committee believes it is important for the church to revisit the entire form to align with what we say today are the characteristics that we value in a church, and make it fully and more robustly electronic, synced with the ways we would record such data, and appropriately shareable through the asset map or a resource like it that helps us to identify and develop networks of mutual support,” she added.

In addition to being skeptical about the collection of more data, several committee members questioned how the data would be used by the church and what the value is. In meetings to discuss the resolutions, for example, “we’ve shared the frustrations about the data we’re collecting and not collecting,” said Washington Bishop Mariann Budde, chair of the Congregational and Diocesan Vitality Committee.

The Rev. Elizabeth Yale of Northwestern Pennsylvania expressed her concern about the difficulty some have in understanding how to complete the reports. “I feel part of our issue is user interface,” she said.

“If you add it to the parochial report, it gives some measure of accountability for your vestry to look at,” said Maine Deputy Elizabeth Hall, who testified in favor of the resolution.

The Rev. Canon Gregory Jacobs, a deputy from Newark and committee chair, said working groups from his committee are reviewing these resolutions and will make recommendations to the full body at a later time.

– Mike Patterson is a San Antonio-based freelance writer and correspondent for the Episcopal News Service. He is a member of ENS General Convention reporting team and can be reached at rmp231@gmail.com.