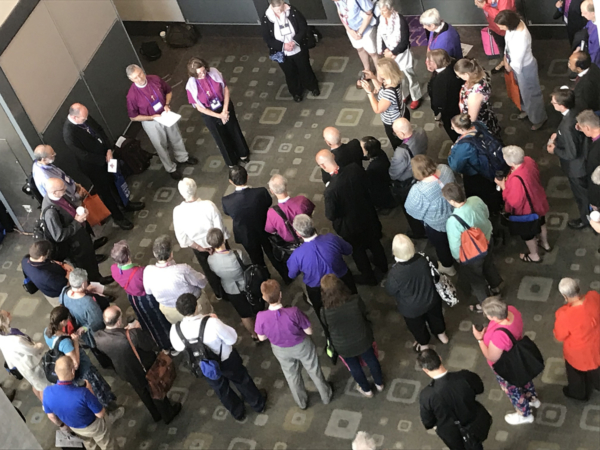 Bishops and deputies pray in a corner of the Austin Convention Center for the victims of those who have committed suicide with a gun. Photo: Mary Frances Schjonberg/Episcopal News Service

[Episcopal News Service – Austin, Texas] Much happens each day during General Convention. To complement Episcopal News Service’s primary coverage, we have collected some additional news items from July 5 and another from the days leading up to the first legislative day of the 79th convention gathering.

Praying for the victims of gun violence

Just before the House of Bishops and House of Deputies officially convened for the first time, some members of Bishops United Against Gun Violence held a prayer service in a hallway of the Austin Convention Center. It was the first of nine planned sessions, each praying for the victims of a specific type of gun violence: suicide, domestic violence, urban shootings, school shootings and other mass shootings, police shootings, children shooting children, accidental shootings, shootings during the commission of a crime and gang-related shootings.

Bishops United Against Gun Violence has scheduled a public witness event at Brush Square Park at 9:30 a.m. July 8. Speakers will include Philip and April Schentrup, Episcopalians from Florida whose daughter, Carmen, was one of the 17 students and educators killed by a gunman Feb. 14 at Parkland’s Marjory Stoneman Douglas High School. Abigail Zimmerman, a ninth-grader and Episcopalian from Texas, also will speak. She co-led a school walkout in March in response to the Parkland, Florida, massacre.

Each day, Bishops United will distribute 96 small crosses to symbolize the 96 people who die from gunfire each day in the US. We ask you to wear the cross during #GC79, and pray for victims of gun violence. Join us at 7:45 in the solar atrium, 1st floor, convention center. #GC79 pic.twitter.com/cVOXcFrRHK

House of Bishops to enter into covenant in response to #MeToo

In response to the July 4 “Liturgy of Listening” that featured the anonymous stories of 12 people – six from women and six from men – victims of sexual misconduct perpetrated by someone in the church, the House of Bishops is working on a Practice of Equity and Justice in the Episcopal Church Covenant, said El Camino Real Bishop Mary Gray-Reeves during a July 5 media briefing.

Bishops who drafted the covenant include Gray-Reeves, Central New York Bishop DeDe Duncan-Probe, Central Pennsylvania Bishop Audrey Scanlan and Bishop Todd Ousley, who is bishop of the Episcopal Church’s Office of Pastoral Development. The covenant will be discussed in the House of Bishops on July 6.

The running of the Michaels 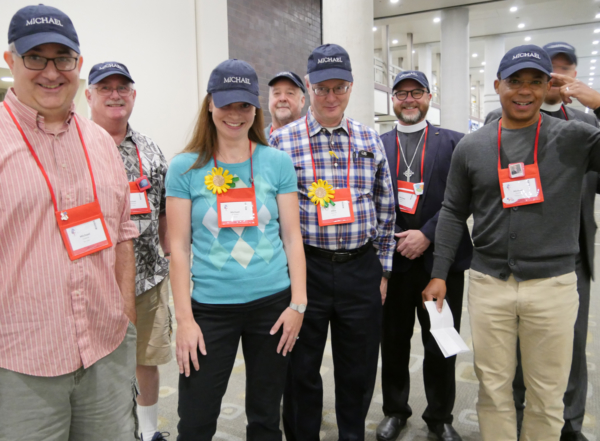 Some deputies named Michael head to the House of Bishops on July 5 to tell Presiding Bishop Michael Curry that their house is ready for business. Photo: Mary Frances Schjonberg/Episcopal News Service

The Rev. Gay Clark Jennings, House of Deputies president, decided to fulfill in a unique way the house’s job of reporting to its colleagues in the House of Bishops that house deputies were organized and ready to conduct the business of the church. She sent a delegation of deputies named Michael, 11 men and one woman, to inform to Presiding Bishop Michael Curry. They were all sporting navy blue baseball caps emblazoned with “Michael” in white letters on the front of the crown. 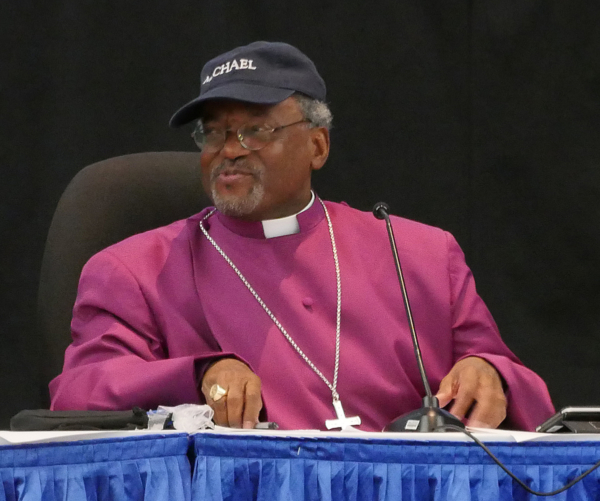 House of Deputies Sergeant-at-Arms Beth Rowley led the group to the House of Bishops’ hall. The bishops stood to welcome them. After the group made its way to the dais and addressed Curry and the house, they presented Curry with his own hat.

“I am glad to know that at least one house of this house is organized,” Curry said as the deputies left the house to the strains of “Michael, row the boat ashore.”

The Social Justice and International Policy Committee kicked off its work at this General Convention with an organizational meeting July 3 featuring one of those tried-and-true welcoming exercises, the circle of introductions. But there was one woman among the bishops and deputies who arguably needed no introduction. 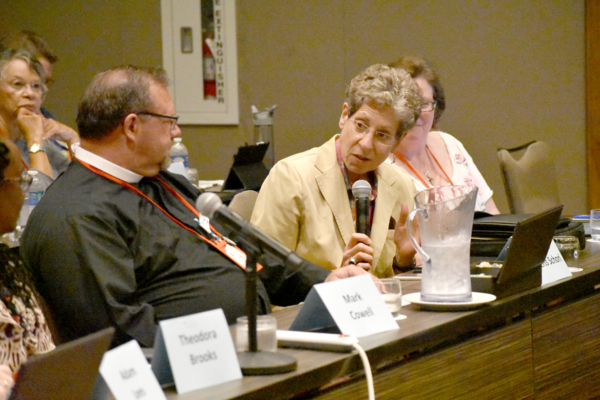 Assisting Bishop Katharine Jefferts Schori is on the committee roster as representing the Diocese of San Diego, where she has served since 2017, but she is better known as the Episcopal Church’s previous presiding bishop, and the first woman in that role.

Jefferts Schori didn’t mention her past role as churchwide leader during committee introductions, though she said she’s had the opportunity to travel around the world and advocate for peace, including in the Middle East, and she emphasized the need to engage people in “deep conversation” on such issues.

Several resolutions relating to Israeli and Palestinian relations are being discussed by the committee, with an open hearing on those resolutions scheduled for 7:30 a.m. July 6. 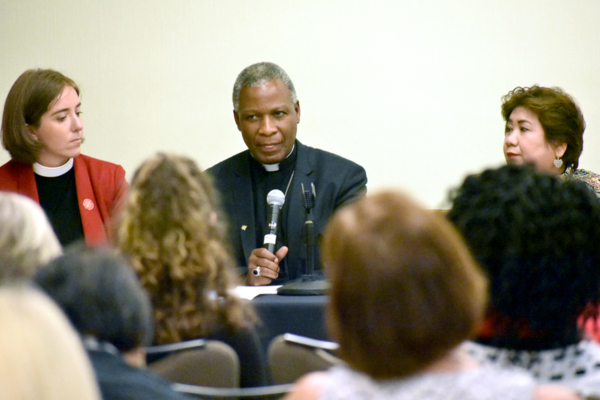 South African Archbishop Thabo Makoba and a panel of international Anglican and Episcopal clergy and theologians met July 5 in Austin to discuss the intersection of spiritual and racial formation in the context of the work underway at the Episcopal Church’s 79th General Convention.

More than 100 people packed into a meeting room at the JW Marriott hotel for the panel discussion, “Race and the Communion,” hosted by Virginia Theological Seminary’s Center for Anglican Communion Studies.

Makoba shared some of his experiences growing up in South Africa’s apartheid system and how that experience still affects how he sees his fellow South Africans, white and black. Segregation and a system that promotes one race’s superiority has the effect of dehumanizing people of other races, he said.

“In order to reform something you need to be able to name the evil,” Makoba said. “By actually naming it as such, we were able to mobilizes, blacks and whites.”

One common thread of the panel was how the pain and injustice of racism can retain their hold on a society and its people long after the political system is reformed. For the Rev. Rose Hudson-Wilkin, this was evident in the subtle prejudices that devalued the lives of minorities in Great Britain, where she is chaplain to speaker of the House of Parliament, in contrast to her native Jamaica, which is primarily black.

Hudson-Wilkin said she learned as a child that God created people in his image and called his creation good, and that meant people of all races have value in God’s eyes.

If she was told her otherwise, “I knew someone was telling a lie, and it could not be God,” but the Anglican Communion doesn’t always project the universality of human value in its leadership, which in Britain is predominantly “white, male and gray,” she said.

And racial perceptions are formed at an early age, the panel agreed, so it is important to counter negativity with positive influences, including through spiritual formation.

“Racism is a spiritual problem. We have been spiritually malformed to be racist in our practice as Christians, and reformation is exactly what has to happen,” said the Rev. Hershey Mallette Stephens, who was project coordinator of the Episcopal Church’s Becoming Beloved Community StorySharing Project and now serves as associate rector at St. John’s Episcopal Church in Chevy Chase, Maryland.