[Episcopal News Service – Austin, Texas] The Social Justice and United States Policy Committee kicked off its hearings at the 79th General Convention on July 4, taking up resolutions relating to gun violence, the social safety net and voting rights, while leaving resolutions on immigration for an upcoming hearing. 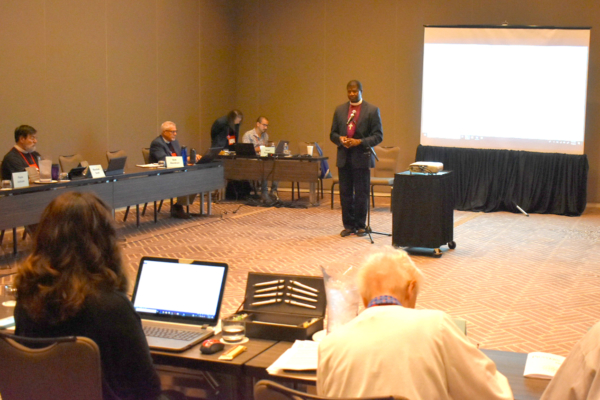 Maryland Bishop Eugene Sutton speaks in favor of a gun violence resolution July 4 at a hearing of the Social Justice and United States Policy Committee, held in a ballroom of the JW Marriott in Austin, Texas. Photo: David Paulsen/Episcopal News Service

The morning hearings, held in a ballroom at the JW Marriott hotel in downtown Austin, covered eight resolutions and lasted about an hour. More than 15 people spoke to the resolutions, and most of their voices were in favor. The committee next will meet to modify the resolutions, as needed, and decide whether to send some or all on for full legislative consideration.

“This is a wonderful committee that’s ready to go prayerfully to work,” Bishop Suffragan Anne Hodges-Copple of North Carolina said to draw the day’s hearings to a close.

Another eight resolutions relating to immigration were assigned to the committee and presumably will generate even more debate. Those resolutions will all be taken up at the committee’s hearing scheduled for 8 a.m. July 7.

The committee opened its July 4 hearing by inviting all in attendance to join in singing a hymn, “We All Are One in Mission,” followed by an opening prayer.

Maryland Bishop Eugene Sutton, who was due to attend another one of the morning’s meetings, spoke on behalf of Bishops United Against Gun Violence in favor of Resolution B005, recognizing gun violence as a public health issue.

“We are in an epidemic,” Sutton said after highlighting some statistics showing the sheer volume of deaths in the United States due to guns. “Think of the cost to our families, our communities, our health systems.”

Virginia Bishop Shannon Johnson, a member of the committee, spoke in support of Resolution B002, a measure he proposed to engage the church in working against government and institutional corruption.

Few people would argue with the evils of corruption, Johnston said, but his resolution seeks to push Episcopalians to actively speak out against it at all levels, in this country and countries around the world.

“Corruption is dangerous evil,” he said. “For far too long, religious communities and churches have not spoken up to challenge corruption and to work alongside other partners in the global transparency movement. … As Episcopalians, we have an obligation to root out corruption where we see it.”

A couple of people spoke in favor of D013, which seeks to end the loophole in the 13th Amendment to the U.S. Constitution that abolished slavery except for prison labor. There also were passionate pleas for passage of two resolutions targeting voter suppression and gerrymandered legislative districts (C047).

Harold Patrick, an alternate deputy from Southern Ohio, who spoke on several resolutions, emphasized that the hearing was happening on the United States’ Independence Day, and the voting-related resolutions are “really about the fundamental right that we all have to vote, and to vote equally and properly.”

Patrick and others provided firsthand witness to the need to repair the United States’ deteriorating social safety net, as called for by Resolution C041. Patrick spoke from his experience as an affordable-housing developer. Several young adult members of the Episcopal Peace Fellowship spoke about poverty-related issues they have worked on, including education and health care.

One resolution that wasn’t warmly welcomed was C015, which calls for stricter punishment for manufacture and possession of guns without serial numbers.

Hodges-Copple noted that the resolution was submitted by the Diocese of Bethlehem without explanation. After a member of the Official Youth Presence read info from the diocese’s website, the Rev. Stan Runnels, an outgoing member of the Executive Council from the Diocese of West Missouri, chose to speak against the resolution, saying it sounded like the measures referenced would simply put more people in prison, and the lack of an explanation leaves the committee with little reason to believe otherwise.