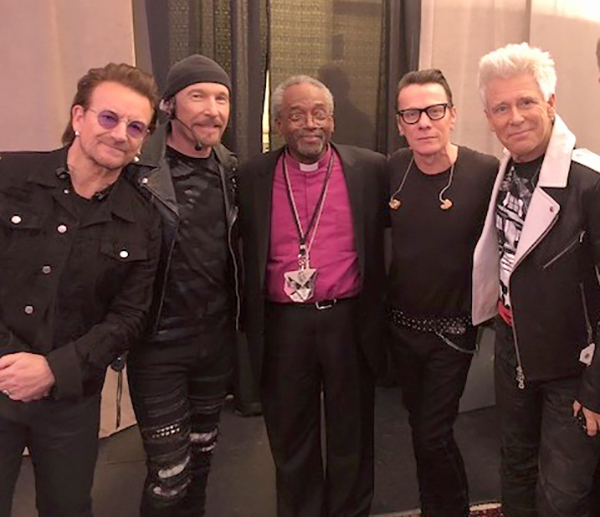 The meeting happened in the evening of June 25 just before the first of a series of U2 concerts in New York on the band’s Experience + Innocence tour. A photo released by the band shows the foursome posing with Curry.

“I know of no other group that has sung and witnessed more powerfully to the way of love than U2,” Curry said June 27 in a written statement to Episcopal News Service. “It was a real blessing to sit with them to talk about Jesus, the way of love, and changing our lives and the world. They are an extraordinary community gift to us all.”

U2, which formed in Ireland in the late 1970s, has been one of the most popular rock bands in the world for more than 30 years, and Bono – among that rarefied group of musicians known globally by a single name – makes headlines these days as much for his support for humanitarian causes as for his music.

Curry, too, has become something of a minor global celebrity since his sermon on the power of love at the royal wedding on May 19. After the wedding, he was invited to discuss the sermon on a dizzying variety of media outlets, from the BBC to celebrity gossip site TMZ. Curry told ENS last month that he sees the sudden attention as a unique opportunity for evangelism, as he tries in interviews to bring the conversation around to what he often calls the “Jesus Movement.”

Reclaiming Jesus is a new initiative he spearheaded this year with the Rev. Jim Wallis of Sojourners to address “a dangerous crisis of moral and political leadership at the highest levels of our government and in our churches” and to affirm what it means to be followers of Jesus in today’s world.

U2 and Bono have not yet commented publicly on Reclaiming Jesus, though Curry said he spoke with them about its origins and intention.

“I shared with them our commitment to reclaim Jesus of Nazareth as the center of Christian faith and life,” Curry said in his statement to ENS. “And this means a way of faith with love of God and Love of neighbor at the core. A love that is not sentimental but a disciplined commitment and spiritual practice infusing every aspect of life, personally, intra personally and politically.”

Curry didn’t say whether he was a fan of U2’s music, though he stayed June 25 to attend the concert at Madison Square Garden. He had at least one prior connection to the songs before this week: A sermon he delivered in 2006 at a U2charist service in Columbus, Ohio.

The U2charists were a popular trend in the Episcopal Church at that time, structured as a Eucharist that incorporates songs from the band, whose catalogue is thoroughly infused with Christian imagery. (Bono’s father was Catholic, and his mother was Anglican, according to this New Yorker report on the band’s faith background.)

Celebrating a U2charist also held a deeper purpose, calling attention to the push to achieve the United Nations’ Millennium Development Goals, such as eradicating extreme poverty, reducing child mortality, and fighting HIV/AIDS, malaria and other diseases. The ONE Campaign, co-founded by Bono, was a key advocate for the Millennium Development Goals – U2’s megahit “One” became its rallying cry – and the Episcopal Church endorsed the organization’s work in a 2006 General Convention resolution.

More than 700 attended the U2charist in Columbus in 2006. Curry, the bishop of North Carolina at the time, preached in support of the Millennium Development Goals and the ONE Campaign, telling those gathered to “be a witness” for Christ. He called the goals “a way for us to discover life again as a Church … a compelling vision of the world God intended from the beginning,” according to an ENS report on the service.

It wasn’t clear whether Curry referenced U2’s music directly in the sermon, though in one unconfirmed transcription of the sermon he is quoted as referring to the band’s leader as “Brother Bono.”