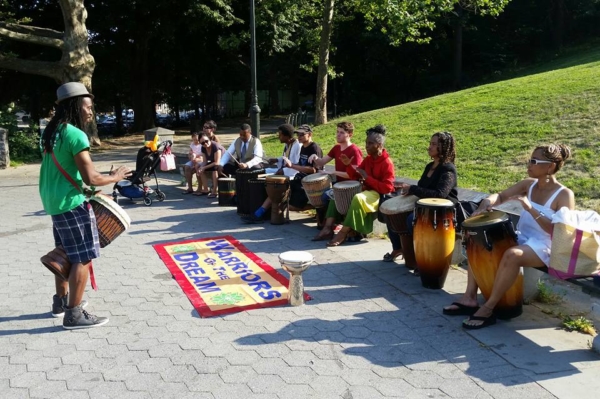 [Episcopal News Service] Sometimes you hear a phrase and it just sticks with you. You ponder its meaning, knowing at some level that there is a message in it for you.

For the Rev. Steve Holton, an experience he had in 1995 has been “a blessing and a guide” to what is now Warriors of the Dream, an innovative program of community building and leadership training with people on the economic and social margins of their neighborhood. The program is based at St. Philip’s Episcopal Church in the heart of Harlem and supported in part by two Episcopal Church Mission Enterprise Zone grants.

Back in 1995, Holton was the rector of St. Paul’s on-the-Hill Episcopal Church in Ossining, New York, about three miles from Sing Sing prison. He heard African-American actor and activist Ossie Davis speak at the first graduation ceremony for the Hudson Link for Higher Education in Prison. Davis marched with the Rev. Martin Luther King Jr. and was the emcee for the 1963 March on Washington when King gave his “I Have a Dream” speech.

Davis, Holton said, often visited the 20 inmates in the program as a kind of “elder.”

“He leaned over the podium and said, ‘You are my sons, you are my warriors of the dream,’” Holton recalled in an interview with Episcopal News Service. “And, of course, he was referring to Martin’s dream of the Beloved Community.” That sort of community, Davis knew as an actor, is built through what Holton calls “creative community.” 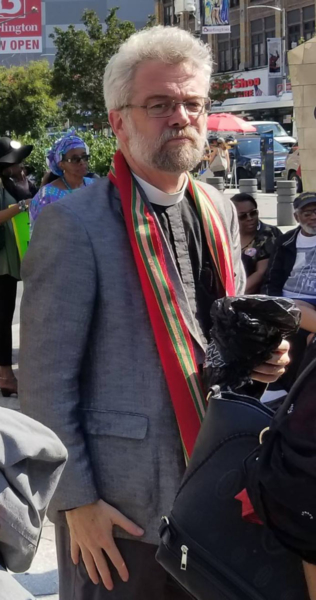 The Rev. Steve Holton says the idea for Warriors of the Dream began to take shape more than 25 years ago. Photo courtesy of Steve Holton

Fast-forward to 2013, as Holton was about to earn a second theology degree to follow the Master of Divinity he received from The General Theological Seminary in 1988. The question he explored was, “What is it about the Episcopal Church that lends itself to community ministry with everybody who’s there?” Holton studied the Anglican monastic tradition’s elements of “food, music and sacred speech.”

As he was thinking about the music part of a potential ministry, a friend told Holton that he had 12 African drums that needed a home. “I said, I’ll take them,” Holton said.

Warriors began at St. Philip’s because its now-deceased rector, the Rev. Keith Johnson, was “open to hosting us so that we could work in the neighborhood,” Holton said. Johnson’s goal was ministry to the neighborhood and “not specifically church growth.” Johnson wanted to explore how to connect the church to the people who live around it.

Holton’s recollection of Ossie Davis’ elder role came to the foreground. “Being an elder has been a theme of Warriors and, in terms of the larger macro goal, is to teach adults how to be elders, because one thing I’ve learned in my discussions with neighborhood leaders both in Westchester and Harlem is what makes a neighborhood is elders,” he said. “What makes children think is elders, not just learning stuff, but kind of being in the shelter of elders.”

Holton formed two important partnerships. Jeannine Otis, the director of music at St. Mark’s Church In-The-Bowery, joined him, following, he said, Jesus’ command to go out to minister two by two. “As a twosome, you model and experience community,” Holton said. Moreover, when a white man and a black woman create that sort of community, “you expand community beyond the borders people usually draw around themselves and you automatically become available to a whole lot of information you never grew up with,” he added.

Holton and Otis then connected with Akil Rose, “the kind of neighborhood leader who never darkens the door of the church” but who, Holton said, is interested in African religions as well as Islam and “the mutual nourishment of all religions.”

They initially thought Warriors of the Dream ought to try to reach children “who are at risk because they don’t join things” like church. However, early Warriors gatherings attracted people who worked with at-risk kids and “needed a place of nourishment themselves.” Warriors also began to attract formerly incarcerated neighbors who felt their families and churches didn’t welcome their return. Moreover, people whom Holton called “church folk who are on the edges of their churches” began coming for a variety of reasons.

“In a world that is wrestling over the right doctrine, whether it’s one extreme or the other, having a group of people that says it’s all about fellowship and the ancient prayers and making music together, that’s a serious antidote,” he said.

The antidote was to create a time for, as the Warriors of the Dream brochure calls it, “a sanctuary for the dreams and hopes of many, and neighborhood transformation.”

The gatherings, which began on All Saints’ Sunday in 2013, have a simple structure. They begin with a breathing meditation and drumming, which Holton describes as “the best of who we are, that’s mysticism.” He uses the example in Genesis 14 in which Melchizedek is providing an “open offer of hospitality … and giving his best to this stranger,” Abraham, who has been wandering in the wilderness, getting caught up in tribal warfare.

Otis shares a scripture passage and people discuss what those verses mean in their lives, “and we rapidly go deep,” Holton said. He listens for a theme around which he crafts a “final message.” A “drum blessing” follows, and then people disperse.

New people come to the gathering and “rapidly go to the same deep level we’ve all been because, as you know as an Episcopalian, the liturgy has that effect of opening that doorway in time into the heart of God, and you’re just there and feel it and you realize you were there, and then you leave and go back out on the street,” Holton said.

He has always been convinced that “it’s our liturgy that converts people,” in part because that is how he became an Episcopalian and was baptized as an adult.

Holton “showed that you can gather people with drum circles, you can adapt Episcopal liturgies to people who have no interest in becoming Episcopalians. They just want to follow Jesus or even follow the Spirit,” the Rev. Tom Brackett, the Episcopal Church’s manager for church planting and mission development, told ENS.

“Steve invited us to learn with him that following Jesus into the neighborhood asks us to serve people, to serve our brothers and sisters in ways that bless them. And the by-product of that, many times, is that it also blesses the church at large, sometimes with new members and new pledges and a worshipping community, but not always.”

Warriors of the Dream received one of the 30 first $20,000 Episcopal Church Mission Enterprise Zone grants awarded in December 2013. Mission Enterprise Zones are designated geographic areas, congregations or dioceses with a mission focused on serving under-represented groups, such as young people, poor and less-educated people, people of color and those who never, or hardly ever, attend church.

Warriors then received a renewal grant in October 2016, one of three such grants for Mission Enterprise Zones originally funded in the 2013-15 triennium.

Warriors of the Dream hit a rough patch earlier this year. “We were having a lot of trouble just getting people [to come] and also running low on funding,” Holton said. He was discerning if the project “had lived its natural life” and along the way had taught him things that he is using in his ministry in North Salem, New York, where he is the interim rector of St. James Episcopal Church. He is using the same ideas from Harlem for gathering people who live near St. James and are outside the church.

However, Holton began looking at who was still coming to the Warriors gathering to see where the Holy Spirit might be pointing. What he saw was many of the newer people were former educators “who had real heart for reaching out to those young kids that we had tried to get back in the beginning, but we just grew in a different direction.”

One of those folks, who was also getting nourished by the gatherings, said she wanted to work with a local Roman Catholic deacon at the Lt. Joseph P. Kennedy Community Center near Harlem Hospital. The center, Holton said, is a magnet for mothers looking for good places for their children to hang out. He hopes the work that is beginning there can be “the doorway into the larger Warriors experience.”

In addition, Holton said his St. James congregation, which he describes as both wealthy and politically conservative in the classic definition of that stance, is happy to have the connections that Holton brings from Harlem to northern Westchester County. His parishioners have become interested in ministry with incarcerated people. They are eager to learn and to minster to and with them, Holton said.

The Warriors musicians are being asked to lead religious services of all kinds, and they will continue to be open to those sorts of calls, he said.

All the while, Holton said, he operates from a stance that he wishes more Episcopalians would take. “We should own our identity as radical liturgists,” he said, stressing again that “it’s that the liturgy is profoundly formational.”

Episcopalians need to “believe again in the heart of our faith and in the heart of God incarnate and present in the world and then come out of those walls as Melchizedek did. Don’t just do it inside the church building,” he said. “Think of ways to get it out beyond the doors.”

“This is not really the continuation of church by other means. It is really Mother Church midwifing the next generation, and the next generation will be something new,” he said. “It will have a whole lot, biologically, in common with the last generation but will be a part of the new spirit, just as Mary gave birth to Jesus. The church is always Mary and the new ministry is always Jesus, and she is going to be worried sick about him. But, it is going to go on to new stuff and appeal to a whole bunch of people who never would have made it in the door. That’s where we are now.”