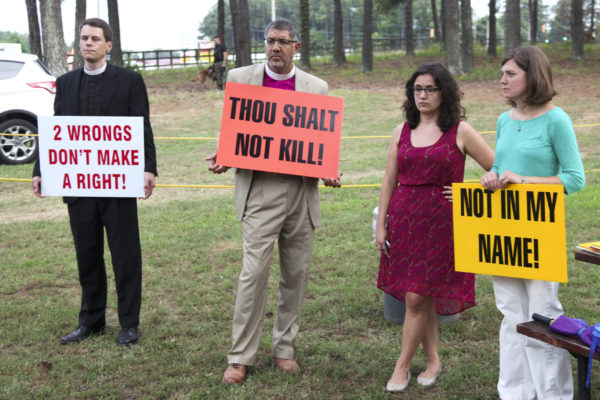 Diocese of Atlanta Bishop Robert Wright, center, joins an anti-death penalty demonstration in 2014 outside the prison in Jackson, Georgia, where state executions are carried out. Photo: Diocese of Atlanta.

[Episcopal News Service] The death penalty was reinstated by the U.S. Supreme Court in 1976. Since then, 1,468 convicts have been executed across the country.

And, according to records kept by the Death Penalty Information Center, more than 80 percent of those executions have been carried out in the South, which Diocese of Atlanta Bishop Robert Wright sees as a “terrible irony” for a region known as the Bible Belt.

“People want the love of Jesus for themselves, in terms of redemption, but they want the Old Testament ‘eye for an eye, tooth for a tooth’ for the people who do these terrible murders,” Wright told Episcopal News Service. “Do we serve a God who can have compassion for the victim and the perpetrator?”

For Wright, the answer is an unequivocal “yes,” and he is heartened by the Episcopal Church’s decades of speaking out against the death penalty while also providing pastoral care to victims’ families.

The Supreme Court’s 1976 decision outlined how states can craft constitutional death penalty laws. Thirty-one states have such laws, and eight of those states carried out executions in 2017, including one in Wright’s state of Georgia. In an effort to renew public attention to the issue and encourage greater advocacy toward abolishing the death penalty, Wright has collected five articles by faith and legal leaders in a book to be released Feb. 15 by the Diocese of Atlanta.

“A Case for Life: Justice, Mercy, and the Death Penalty” includes the story of Wright’s growing advocacy since 2012, when he became bishop of a diocese that includes the prison in Jackson, Georgia, where death row inmates are held and executed. He last visited the inmates Feb. 7 as he does every few months, praying with them and sharing the Eucharist.

He also has joined vigils outside the prison when executions have been carried out.

“Serving as a pastor demands that I resist the temptation to engage in denial and euphemism because issues are hard or that people have differing opinions about a matter,” Wright writes. “That said, we can believe anything we choose to believe about capital punishment, but you can’t make Jesus a proponent.”

Bishop Andrew Doyle of the Diocese of Texas wrote an article for the book, about the murder of an Episcopal priest in his diocese by the priest’s son. Texas has executed 548 people since 1976, five times more than any other state. But the priest’s son was not among them, receiving instead a life sentence with the support of members of the local faith community.

“They chose to bear out a different witness over and against the prevailing world’s values of violence and retributive justice,” Doyle writes.

The other authors are a retired Georgia Supreme Court justice, a human rights lawyer who has argued and won three death penalty cases before the U.S. Supreme Court, and Susan Casey, an Episcopalian and attorney who represented a Georgia woman put to death in 2015.

“I’m against capital punishment because of my faith,” Casey, a member of St. Bartholomew’s Episcopal Church in Atlanta, said in an interview with Episcopal News Service. “I don’t believe that any person is beyond redemption. For me, that’s the essence of my faith and my belief.”

Her client, Kelly Gissendaner, was convicted in the murder of her husband. She was having an affair with another man, who received a life sentence for carrying out the murder, but she received the death penalty. Casey said Gissendaner’s faith grew while on death row, and she studied theology while behind bars.

“She came to understand that God’s mercy and forgiveness still were available to her, despite what she had done. Over time, Kelly gained confidence in the strength and magnitude of God’s grace and redemptive power,” Casey says in her article in “A Case for Life.”

Casey represented Gissendaner for 14 years, until her execution on Sept. 30, 2015. Since then, much of Casey’s work as an attorney has focused on what is called restorative justice, which seeks to support the victims of crimes and their families while helping convicts find their way to redemption.

Gissendaner’s children were ages 12, 7 and 5 at the time of their father’s murder. In adulthood, they shunned their mother, but over time Gissendaner was able to reconcile with each of them, to the point that they became advocates for her in trying to stop her execution.

Casey alludes to that process in describing her emotions at witnessing Gissendaner’s final moments alive.

“The children who had chosen love and forgiveness over hatred and anger were made to swallow the bitter, collective pill of vengeance,” Casey writes. “It was tempting to despair about a society that leaves no room for the power of redemption and justice that is restorative, but I tried to resist.”

Strapped to the execution gurney, Gissendaner sang the hymn “Amazing Grace” as the state took her life.

The Episcopal Church has stood against the death penalty since 1958, and General Convention has regularly affirmed that opposition since capital punishment was reinstated in 1976. A 2015 resolution titled simply “Abolish the Death Penalty” encourages bishops in states where the death penalty is legal to “develop a witness to eliminate the death penalty.”

The number of executions each year has gradually declined nationwide since 1999, when 98 people were executed. That number fell to 20 in 2016, but it rose to 23 last year, when the national spotlight focused on Arkansas’ rush to execute eight men on death row before its lethal injection drugs expired.

Episcopalians were among those rallying against those executions in Arkansas, including at prayer vigils at Trinity Episcopal Cathedral in Little Rock. In the end, four of the executions were carried out. The other four were stayed.

The death penalty remains in effect in Arkansas, and 32 people were on the state’s death row last year, among 2,817 nationwide, according to the Death Penalty Information Center.

“There is no political will to do anything about this,” Wright said, and yet he sees clear biblical and visceral imperatives for Christians.

“We worship a guy every Sunday who was executed by the state in collusion with different religious people, and here that plays out again,” Wright said.

In Matthew 25, Jesus exalts the act of visiting the prisoner alongside feeding the hungry and caring for the sick. And what do inmates look like when they’re strapped to the execution gurney with their arms out? “Like Jesus on the cross,” Wright said, questioning how such a process can be condoned by a civilized nation.

The concept of “justice” may be “the most tragic lie in all of this,” Wright said. “Vengeance and justice are two different ideas. There’s no justice in this.”

“A Case for Life” is available from the Cathedral of St. Philip Bookstore online at cathedralbookstore.org or by phone at 800-643-7150. A panel discussion and book signing will be held at 7 p.m. Feb. 15 at Holy Innocents’ Episcopal Church in Atlanta. Participants will include some of the collection’s authors, as well as Sister Helen Prejean, author of “Dead Man Walking.”