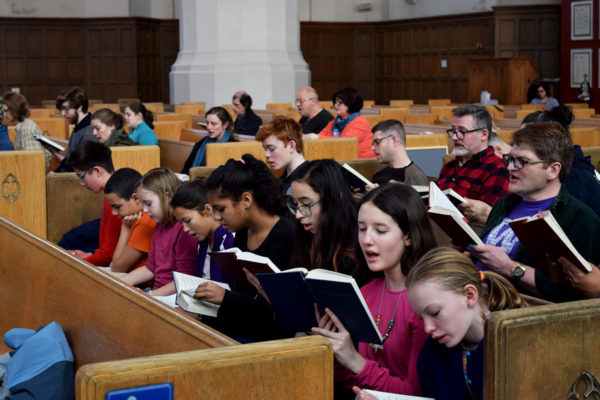 Children, as well as adults, participated in a hymnathon fundraiser at St. Mark’s Episcopal Cathedral in Seattle, Washington. The singers covered all 720 hymns in the Episcopal Church’s Hymnal 1982. They stayed seated, had water by their sides and took two snack breaks to help them get through it. Photo: Liz Bartenstein

[Episcopal News Service] Fiona Campbell prepared for last weekend’s test of endurance by eating a good breakfast, hydrating and keeping a big water bottle by her side.

The Jan. 27 event wasn’t a 26.2-mile race, a running marathon. It was a hymnathon — a test of singing stamina like no other.

“It’s going to be a looooooong time,” said Campbell, 20, the week before the fundraising event. Campbell’s been a chorister at St. Mark’s Episcopal Cathedral in Seattle, Washington, since she was 10. To raise money for the Evensong Choir to sing at historical cathedrals in England this summer, choir members sang the first verses of 720 hymns for almost nine hours straight. They had a 15-minute morning break, a one-hour lunch break and a 15-minute afternoon break.

Working through the Hymnal 1982, they started with hymn No. 1 at 8 a.m. They also devoted two hours to singing all the verses of the special dedication hymns chosen by donors who gave an extra amount for the honor. To fit it all in, they had two timekeepers to help singers average about 30 seconds a hymn, with the goal to cross the finish line by 6 p.m.

Michael Kleinschmidt, the cathedral’s canon musician, was shocked they finished ahead of schedule, by 5:20 p.m.

“It was all rather breathless,” Kleinschmidt told Episcopal News Service after the event. “At one point, we all discovered we were breathing rather shallowly. We just weren’t taking deep clean breaths. After an hour or two, we stopped, stood up and took a deep, clean breath, and some of us said, ‘Oh my gosh, I’m dizzy.’ ” 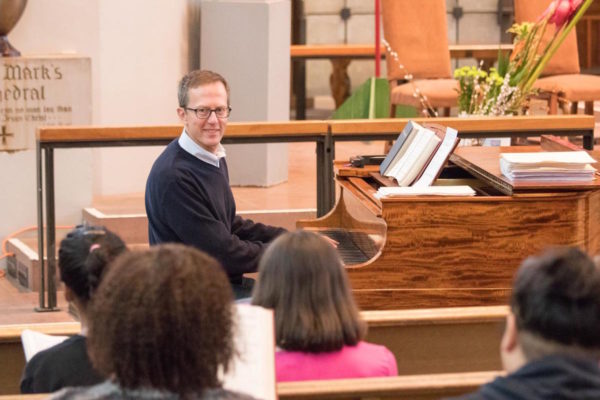 Kleinschmidt’s hymnathon idea stemmed from his experience more than a decade ago, when he worked with music director and organist Richard Webster at Trinity Church in Boston. Webster organized hymnathons at St. Luke’s Episcopal Church in Evanston, Illinois, before carrying the idea to Boston in 2005.

“Richard is a marathon runner, so he has a special kind of enthusiasm for this kind of thing. He’s done the Boston Marathon a few times. Oh, yeah, he’s hard core,” Kleinschmidt said.

In the same way that hardly anyone, even experienced singers, tries to sing for nine hours straight, few people, even runners, go the full marathon distance.

The marathon was inspired by the legend of a Greek messenger who raced 40 kilometers, or about 25 miles, from the site of Marathon to Athens in 490 B.C. with the news of an important victory over an invading army of Persians. The exhausted messenger collapsed and died after making his announcement, according to The History Channel. By the 1921 Olympics, the standard marathon distance was 26.2 miles.

While running a marathon typically takes three to six hours to complete, this hymnathon far outlasted the time that even the slowest marathoner spends on the race course. And no one died completing this endurance feat.

“I was amazed how well everyone’s energy held up through the thing,” Kleinschmidt said.

They looked at it as a practice run for the hectic singing schedule they’ll have during the British trip.

Choir pilgrimages to England are a tradition during the summer, when U.S. choirs can fill in for British cathedral choirs, which typically take breaks during the busy tourist months of July and August, Kleinschmidt said. At St. Mark’s, choral director Rebekah Gilmore’s Evensong Choir is comprised of about 35 selected singers, from 12-year-old children to adults in their 60s, Kleinschmidt said. Choir members are required to sight-read and sing advanced music.

“Being able to dip our feet into this ancient river of sung prayer is a transformative experience for these young children. It’s really life changing,” Kleinschmidt said.

Hymnathons are fundraising endurance tests of the vocal cords that Episcopal choirs are taking from coast to coast. 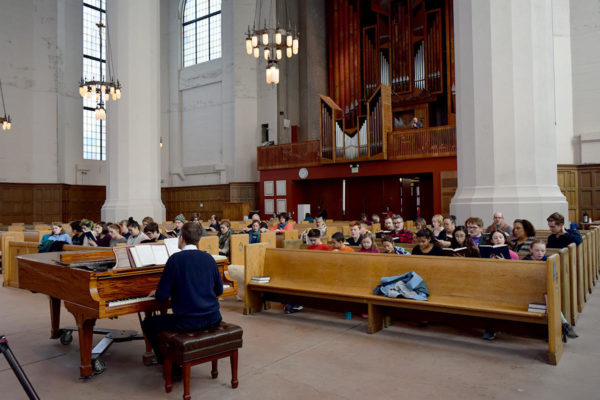 St. Mark’s Cathedral in Seattle, Washington, conducted a hymnathon to raise money for the Evensong Choir to sing in England this summer. Participants sang all 720 hymns in the hymnal during the nine-hour event. Photo: Liz Bartenstein

Kleinschmidt organized his first hymnathon in Portland, Oregon, which raised more than $22,000. His goal for the St. Mark’s choir is $35,000. Fundraising isn’t over.

In September, a hymnathon at Christ’s Church in Rye, New York, raised $7,798 for the choir’s pilgrimage to sing in England in August.

Fundraising can take all sorts of creative forms, but a hymnathon is quite a lofty goal in itself, money aside, said Deanne Falzone, mother of Josette, 12, a member of the senior choristers at St. Mark’s and one of the youngest members of the Evensong Choir. The Evensong Choir is a hand-picked, professional-grade choir of older children and adults.

“It seems like a pretty big feat to do,” Josette’s mother said. “There’s been just so much energy from so many people in the choirs.”

Most recently revised in 1982, the Hymnal of the Episcopal Church offers 720 service hymns plus liturgical music. Some hymns hark back to centuries-old monastic chants. Others hail from more modern times.

The Office of Latino/Hispanic Ministries is in the final stages of compiling a cancionero, or songbook, as an affordable, accessible Spanish-language songbook for use throughout the Episcopal Church. 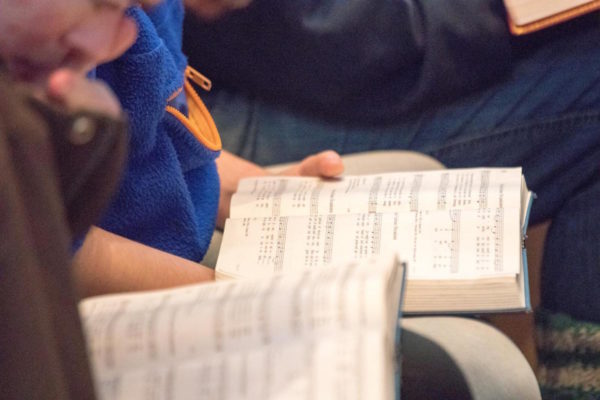 The latest version of the Hymnal of the Episcopal Church was revised in 1982 and has 720 songs to be used for services. Photo: Kevin Johnson

A seventh-grade home-schooled student, Josette soaks in the social aspects of choir activities, as well as the music, and last week she said she was looking forward to the hymnathon.

“I think it’s probably going to be the most awesome singing experience I’ve ever had,” she told ENS by phone.

Throughout this daylong choral challenge, Kleinschmidt and the choir members uncovered some hymn treasures and others that were, shall we say, less appealing.

“I think everyone found some new favorite hymns, and some new ones that we hope never to sing again,” Campbell said with a laugh. “Some of the worst culprits were ‘adapted’ gospel songs, as we had suspected.”

While some of them would look at each other and laugh during the hymns that they’d have preferred stayed buried, several singers jotted down some of their favorites to remember for later, Kleinschmidt said.

“I’ve used this hymnal since 1990, and I’m still finding new treasures in it,” he said, recalling hymns 383 and 384, the first a well-known version of “Fairest Lord Jesus,” the other, a lesser-known rendition with a beautiful melody. “The melody climbs higher and higher and is a beautiful pairing with the words. That’s a little gem I discovered.” 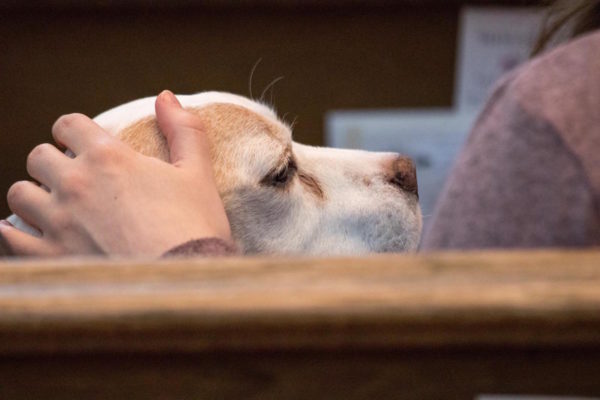 A dog was one of the supportive elements that helped singers get through the nine hours of singing during the hymnathon fundraiser on Jan. 27. Photo: Kevin Johnson

So, how did the singers feel about crossing their “race” finish line?

“We had compared this to running,” Campbell said. “And there was a similar sort of effect where you expect it to be grueling and difficult, but in reality, the adrenaline gets you through and honestly feels great.

“Overall, I frankly could not be more pleased.”