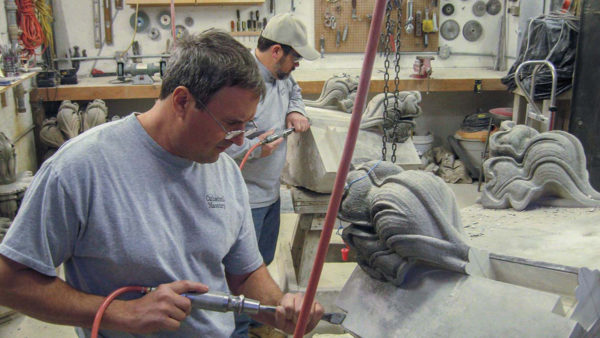 [Episcopal News Service] The earthquake that struck the Washington, D.C., area in August 2011 caused an estimated $34 million in damage to Washington National Cathedral. More than six years later, less than half of those repairs are done, and the remaining work could take another decade to complete.

Progress is being made, however, and the Episcopal cathedral last month received a year-end donation from a foundation that will allow it to embark this spring on the next phase of repairs. This latest $1.5 million project will focus on the structure around an interior courtyard, which is the last part of the cathedral still closed to the public.

“It took 83 years to build this place. We’ve had scaffolding on the outside of our building more than we have not. In some ways, we’re kind of used to it,” said Kevin Eckstrom, the cathedral’s chief communications officer. 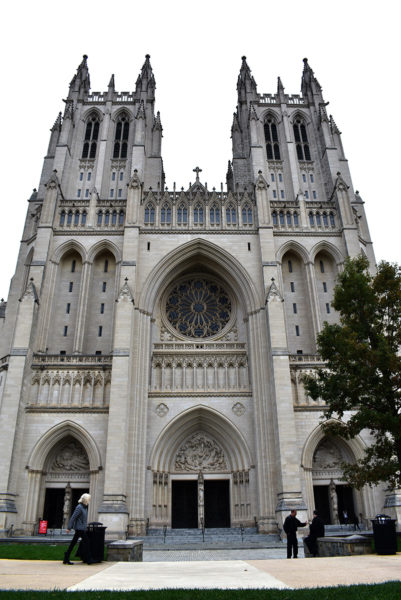 Repairs to the west towers at the front entrance to Washington National Cathedral were completed in summer 2017. Photo: David Paulsen/Episcopal News Service

It remains a beautiful building and an iconic religious landmark in the U.S. capital, but Washington National Cathedral also is more than the stones that form it, Eckstrom said. “The staff and the leadership feel very strongly that what’s really important about the building is what goes on inside.”

The courtyard project is a prime example. Known as the garth, it features a fountain and a patio, and reopening it will allow it to be used for weddings, banquets and other gatherings. There also are separate plans to add a columbarium and memorial garden to the space.

The walls surrounding the courtyard aren’t the problem. It’s the two pinnacles above that rotated during the earthquake, causing pieces to fall onto the courtyard below.

The work this spring is just one of nine projects, some completed and other pending, that make up the second phase of earthquake repairs. Phase 1, costing about $10 million, was completed in 2015, and it focused on the interior of the cathedral and on the largest and oldest buttresses toward the rear. The cathedral was fully closed for just three months in 2011, as crews completed stabilization work in time to reopen that November to host the installation of Diocese of Washington Bishop Mariann Budde.

The rest of the work is being completed as the money is raised through private donations.

“We are committed to finishing the earthquake repairs and returning this glorious building to its original grandeur,” Dean Randy Hollerith said in an emailed statement. “However, those repairs must not, and will not, come before the ministry and mission that happens here. The building is important, but it is just a vehicle for the more vital work of ministry. What happens on the inside is ultimately more important than what people see on the outside.” 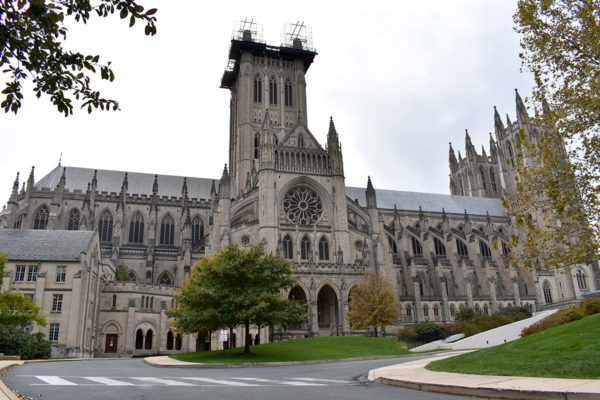 Washington National Cathedral’s initial construction was completed in 1990, though it continued to need maintenance and restoration, even before being damaged by the 2011 earthquake. Photo: David Paulsen/Episcopal News Service

The cathedral is a solid masonry structure, so “the only thing that’s holding it together is gravity and physics and a whole lot of mortar,” Eckstrom said. As it is being repaired, stone by stone, crews are installing stainless steel rods between the stones to make the structure more resistant to the next major earthquake, if and when it strikes. 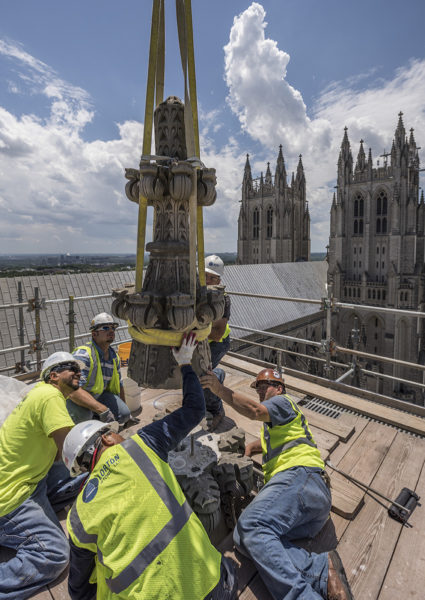 Crews in 2016 reinstall a pinnacle that was damaged in the earthquake. It was reinforced with the stainless steel rods. Photo: Colin Winterbottom/Washington National Cathedral

About 80 percent of the exterior of the cathedral still needs to be repaired. Some of the fixes have merely entailed reinforcing the structure, while other pieces of towers, pinnacles, buttresses and transepts have been damaged beyond repair and need to be replaced by carving new stone.

Alonso has worked at the cathedral since 1985 and was part of the final phase of its original construction, which was completed in 1990. The structure continued to need maintenance and restoration in subsequent years, but nothing like the aftermath of Aug. 23, 2011 when the magnitude 5.8 earthquake struck. It was centered 84 miles southwest of the cathedral near Mineral, Virginia.

“My God, the day of the earthquake, that was a punch in the gut,” Alonso said. He and his team, though, are making the most of their present work by cleaning and renovating parts of the cathedral that would not have been spruced up for years, such as the ceiling and the stained glass. “The access that we’re gaining with some of the earthquake work, we’re able to do some other needed repairs.”

The biggest repair project left is the central tower, which will cost an estimated $5 million to fix.

“When the quake hit D.C., the seismic waves went to the highest part of the city, which is the hill we’re sitting on,” Eckstrom said. “And they traveled up to the highest part of the building. … That happens to be our central tower.” A similar scenario occurred at the Washington Monument, which is expected to remain closed to the public until 2019.

The cathedral’s central tower is 300 feet, but its four grand pinnacles lost 20 to 30 feet of stonework when the stones fell or had to be removed. What remains is being stabilized with scaffolding until the repairs get the green light. If the cathedral were to receive enough money today to complete the project, it would take about three years, but this and the rest of the repairs on the list likely will stretch over the next decade. 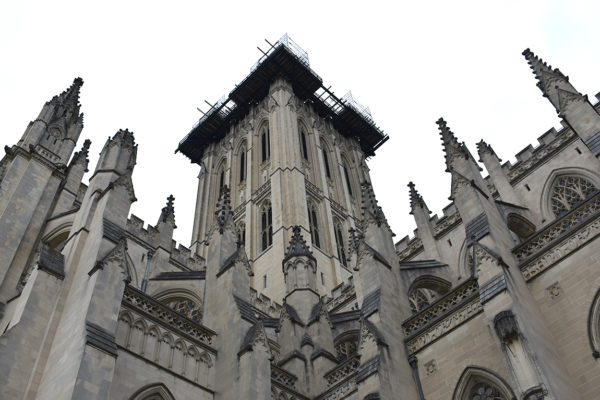 Scaffolding is seen on the central tower of Washington National Cathedral, which was damaged in a 2011 earthquake. Photo: David Paulsen/Episcopal News Service

Washington National Cathedral is one of only two cathedrals in the United States, and the only Episcopal cathedral, with an active stone shop, Eckstrom said, and Alonso and two stone carvers have been busy since the earthquake. The second phase kicked off with repairs to the cathedral’s north transept in spring 2016. Another project, fixing the iconic west towers at the front of the cathedral, was completed in spring 2017. 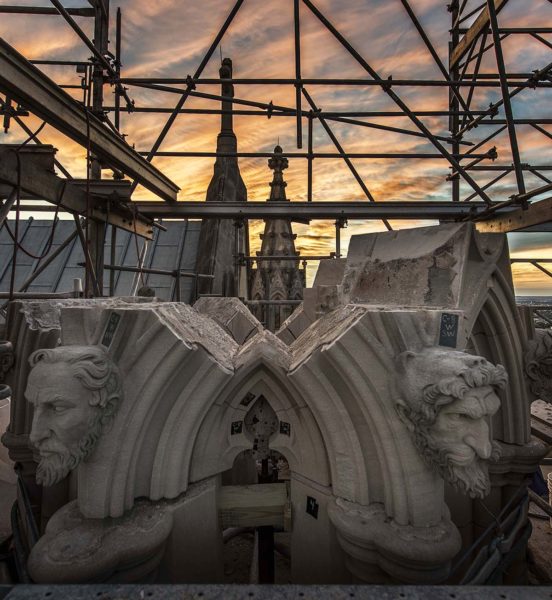 These carved faces of Old Testament prophets were part of a turret that was disassembled in summer 2017 and lowered to the ground until it can be repaired. Photo: Colin Winterbottom/Washington National Cathedral

One additional silver lining in the earthquake’s aftermath has been the opportunity to see parts of the cathedral that otherwise would be out of reach. That’s because they’ve been brought down to eye level for repairs.

Last year, a damaged turret 20 stories up had to be taken down and placed on the ground outside the cathedral, allowing for close inspection of its defining feature: the carved faces of eight Old Testament prophets.

The cathedral, unfortunately, has no record of which prophet is which, but “it really gives you a chance to see the craftsmanship that went into creating the building,” Eckstrom said.