[Episcopal Diocese of Southwest Florida] The Rt. Rev. Rogers Sanders Harris, whose call to Southwest Florida came at a critical time for the diocese, died Nov. 15, in South Carolina. His predecessor, the Rt. Rev. Emerson Paul Haynes, had served a 13-year episcopate and died while in office in 1988, which left the diocese without a bishop. 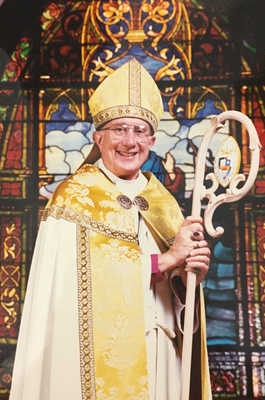 “He just came at a very difficult time,” said the Rt. Rev. Barry Howe, the current assisting bishop of the diocese and, during Harris’ time, dean of the Cathedral Church of St. Peter. “He took a very difficult situation and made the best of it he could.”

Howe recalled that when Harris arrived, the issues of women’s ordination were left unresolved, and formal plans to elect a bishop coadjutor (a bishop with the right of succession) were never completed. The standing committee instead became the ecclesiastical authority and several retired bishops assisted during that period, but were never actual administrators. Important decisions were just deferred.

Harris was invested as diocesan Sept. 9, 1989, at the cathedral. Joan Kline served on the search committee for Harris and attended general conventions with him and his wife, Anne. She recalled having a good relationship with them. “I thought that he was the kind of bishop that went by the book,” reflected Kline, who said that the previous bishop, Emerson Paul Haynes, was in some ways more hands-off. “That didn’t always make him popular with the clergy,” Kline said.

It was during Harris’ tenure that the diocese first ordained female priests. When the diocese was in the selection period for bishop, Kline recalled that the issue of the ordination of women was central, as Southwest Florida was one of seven outlier dioceses in the Episcopal Church that were not ordaining women, and the previous bishop, Haynes, had not ordained women.

The decision to go forward with women’s ordination came fairly quickly, as it had been clear from the time of the election that Harris would be supportive of the idea. To resolve the issue and many other simmering problems, he arranged a meeting, recalled Howe. “He called together all the clergy who were not happy, and that was not hard.”

Harris ended up sending Sharon Lewis to seminary; other female priests in the diocese, such as the Rev. Tonya Vonnegut Beck, were licensed. The first woman he ordained was the Rev. Carol Schwenke, who was then a deacon at Holy Innocents in Valrico. Schwenke said she was at first a bit intimidated by him, thinking he was strict and standoffish, but that was just because she says she didn’t understand his personality. Later on, every time she saw the Harrises, she would get a hug from them both. “I remember that he went by the book,” said Schwenke, who said that she believed he thought of himself more an interim bishop, one who would “bring the diocese up with the rest of the church.”

In his first convention address to the diocese Oct. 13, 1989, Harris reminded the gathering that Jesus Christ was head of the church. “We are here to do his will, to serve his mission. So I come to be the leader of this diocese, not the head of it.”

A native of South Carolina, Harris was born Feb. 22, 1930, in Anderson, the son of Wilmot Louis and Sarah Elizabeth (Sanders) Harris. After receiving his bachelor’s degree at the University of the South in 1952, he married Anne Stewart March 28, 1953. He served in the Korean War from 1952 to 1954 as 1st lieutenant in the U.S. Marine Corps. “He came across as being no-nonsense,” said Howe. “He had been a marine in Korea.”

After his service, he received his Master of Divinity from the University of the South in 1957, was made deacon August 6, 1957 and priest April 5, 1958, under the Rt. Rev. Clarence Alfred Cole of the Diocese of Upper South Carolina. In his parish work, he first served as vicar of both Grace Episcopal Church in Ridge Spring, South Carolina, and St. Paul’s Episcopal Church in Batesburg. He served for 10 years as rector of the Church of Good Shepherd in Greer from 1959 to 1969 and was later rector of St. Christopher’s in Spartanburg from 1969 to 1985. He was consecrated bishop in the Diocese of Upper South Carolina March 9, 1985, by the Most Rev. John Maury Allin and the Rt. Revs. William Arthur Beckham and Alex Dockery Dickson. There, he served as suffragan bishop from 1985 to 1989.

“Rogers was loved for his deeply pastoral ministry and strong leadership,” said the Rt. Rev. W. Andrew Waldo, bishop of the Diocese of Upper South Carolina. “We will all miss his faithful witness to the gospel of Jesus Christ and his thoughtful presence.”

In the wider church, he served as vice president of Province IV of The Episcopal Church from 1991 to 1994 and president from 1994 to 97. He was a member of the presiding bishop’s Council of Advice from 1994 to 1997. He served as a trustee of the University of the South in Sewanee and president of the Bishop Gray Inn in Davenport, Florida, from 1989 to 1997. He received his Doctor of Ministry from Virginia Theological Seminary in 1977, as well as an honorary Doctor of Divinity in 1986. His thesis was The Commitment of Confirmation.

“He was just a wonderful soul,” said Karen Patterson, who served as secretary of the nominating committee before the election of Harris. “He was a wonderful person to work with.” Patterson appreciated that he served as personal chaplain to the Episcopal Church women, who then had a non-voting representative on diocesan council. She said that during the time after Haynes left the diocese, many issues had not been addressed, as there was no bishop. He had a bit of a formal, businesslike approach to his office, what Patterson assumed was a remnant of his time in the military.

“Our diocese needed that at the time,” said Patterson. They also served together in Province IV. Patterson said that outside of the diocese, people called him Rogers, which was unheard of within the diocese, even with clergy. “He was much more relaxed at synod.”

Smith also observed that relaxed nature. “Rogers, being the third bishop of the Diocese of Southwest Florida, he called me ‘five’ with a twinkle in his eyes,” said Smith.

“He played everything in the key of C major,” said the Rev. Canon Michael P. Durning, who first came to know Harris while he was curate at St. John’s in Naples, and served as chair of the finance committee. He recalled that Harris, who he described as “uncluttered and uncomplicated,” addressed the issue of diocesan apportionment. He came at the calculation from both a theological perspective, as well as his personal stories of his farming ancestors in rural South Carolina. “The larger congregations had a larger responsibility than the smaller congregations,” said Durning.

“I think of him often,” said Sandra Poling, assistant to Harris, who recalled his quiet nature and “innate honesty” in all he did. “He would give a job and expect it get done. He was not one to stand behind you and direct you.” She recalled him as a prayerful man, fully aware of everything going on around him. When problems came, he “dealt with it.”

“He provided a steady hand that was needed and appreciated,” said the Rev. Ed Henley, who believes that putting the diocese on a sound administrative footing was a critical accomplishment. “His personality was not such that you ended up with a lot of stories, but that was perfectly fine.”

The issues and discussions of worship styles were not of great importance in his role as bishop. “He didn’t make a whole lot of fuss about liturgy,” said Howe, who worked across the street from diocesan offices, which were then in St. Petersburg, across from the cathedral. “We just kind of became good friends.” He recalled that in his personal demeanor, he was reserved. “He was a very soft-spoken guy, and thought a lot before he spoke.”

His wife, Anne Harris, survives him. The family notified Smith by text that “Amazing Grace” was playing in the hospital room when he died.