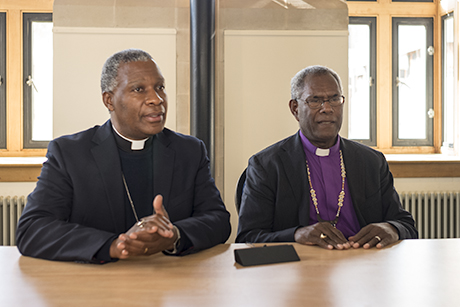 [Anglican Communion News Service] Disappearing islands in the south Pacific, recent hurricanes in the Caribbean and food security issues in Africa were amongst the items discussed by Anglican church leaders as they discussed climate change and the environment during the Primates Meeting in Canterbury, England.

The discussions began on Oct., 3 when Archbishop John Holder, primate of the West Indies, briefed his colleagues on recent hurricanes in the Caribbean; and continued Oct. 5 when the primates heard about disappearing islands in the south Pacific and food security issues in Africa.

Later, in an interview with the Anglican Communion News Service, Holder said that he welcomed the primates’ discussion on the environment, saying that it was “very important” for the church to speak out on climate change. “We are connecting these two devastating hurricanes [Irma and Maria] to climate change,” he said. “We can’t prove it but we think there is some kind of climate change element in there.”

Commenting on the primates’ discussions, he said: “We were hearing the stories from different parts of the world on climate change,” he said.

“And I think we are all convinced it is a fact of life. Even if you take away the term ‘climate change’, something is going wrong with the weather. The weather is becoming extremely destructive and there must be a reason for that.

“So, all of us . . . understand this is a problem and we commit to doing whatever we can to alleviate this problem; or at least help people prepare themselves for the bad weather. And when they are devastated or when they have bad experiences, then chip in to help them to reconstruct and revive themselves.”

On Oct. 5, Archbishop of Southern Africa Thabo Makgoba began the morning session with a biblical reflection on John 1: 29. He told ACNS that he finished his reflection with “a challenge, as Jesus invites us – as he said to Peter – to feed his lambs, to feed his sheep.

“And I lamented the fact that very often when we discuss things as primates we discuss the social justice issue of feeding the lamb and the vulnerable.” He encouraged his fellow-primates to think about “caring for the where the lambs and the vulnerable are – that is the environment” and to “make the linkage between social justice and climate justice.”

“The design of the Primates Meeting is just so overwhelmingly empowering,” Archbishop George Takeli, the primate of Melanesia, said, “particularly the sessions on reflections on the Scriptures.

“The reflection by Archbishop Thabo was so deeply transforming – particularly in the invitation to see the world through the eyes of God. That was the greatest challenge and the life-transforming invitation that was given to us this morning when he asked how many provinces were affected by food security and climate change – I think the whole house did raise their hand up.”

In a starkly powerful message, he said: “some may see information on climate change on television and take it as interesting reading, as entertainment; some would read it in newspapers and treat it as something to occupy time, but for me – and especially for us in Melanesia – it is actually an urgent matter.”

He said that there were three important issues to consider: “The weather pattern throughout the year is no longer consistent, creating surprise cyclone seasons – we have more cyclones than before causing flash flooding. Some places where there are no floods we are getting flash flooding happening.

“Secondly, the climate change is affecting the soil – the whole overall environment where you could plant two or three times before and you could harvest the same amount of food, is no longer there.” He said that many Melanesians live of subsistence farming and can no longer grow crops to feed themselves and their families.

Makgoba is recognised as a leading champion of environmental concerns. He too welcomed the discussions. “What I hope will come from this meeting is a commitment by each primate to pray for social justice issues but to look at those with the eyes of saying the climate, the environment, the earth where they are happening, ought to be cared for,” he said.

Takeli added: “What strikes me is the awareness, as I listen to many stories from my brother primates throughout the world I see that I am being buried deep in their own issues as well. They become part of me.

“Our stories are making the world become a very small world – that we are part of each other. And what I begin to sense from the Primates’ Meeting is that all of us are moving towards creating a strong network to work together between the primates, addressing the issues of climate change and other issues together.”