[Episcopal News Service] People for the Ethical Treatment of Animals has called for vegan bake sales instead of lobster boil fundraisers, but some Episcopalians are finding the request a bit tough to swallow.

Melissa Mary Wilson, coordinator for the Christian outreach division of PETA, called for an end to the popular fundraisers in a late August letter to Episcopal Church Presiding Bishop Michael Curry.

A Maine native, she said lobster boils are “part of life, part of the culture” there and elsewhere, and not just for churches but also for many local municipalities and other groups.

The church’s annual Lobsterfest took place on Sept. 16, raising about $7,300. The proceeds will go to local agencies and most probably for flood relief for those impacted by recent hurricanes. 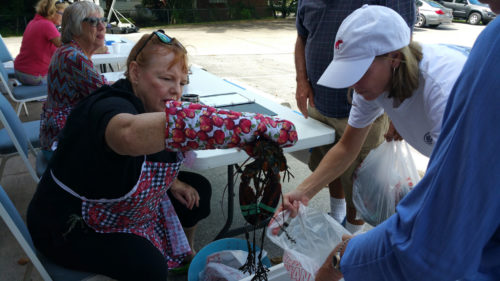 The lobsters typically weigh about 1.5 pounds; the church sells them for $18 to $21, depending on current market price and whether they are cooked or uncooked, she said. This year the church sold about 700, and has set a goal to sell 1,000 next year.

“Everyone is very conscientious,” Sabisch said. “Everyone who is involved in handling God’s creatures. We will do everything as humanely as possible.”

LAMBS, or “Least Among My Brothers and Sisters,” is PETA’s Christian education division. Its name was “inspired by the verse in Matthew 25:40 in which Jesus tells his followers that whenever you show kindness to those in most need, it’s as if you’re doing that kindness as unto Jesus himself,” said Ben Williamson, PETA’s senior international media director, in an email to Episcopal News Service.

“With so few legal protections, lobsters and other animals are truly ‘the least’ among us — and in dire need of our compassion and mercy,” Williamson said.

PETA believes one popular method of cooking — boiling the lobsters — is cruel. “Most of us grew up believing that killing lobsters and other animals for food is what must be done, but if we contemplate it, all killing requires conquering, violence and separating ourselves from the rest of creation,” PETA wrote to the presiding bishop. “God designed humans to be caretakers, not killers.”

Curry was unavailable for comment, but Episcopal Church spokeswoman Neva Rae Fox said: “PETA has presented an interesting point but local congregations are the decision-makers for their events.”

Williamson said LAMBS researchers compiled a list from an Internet search of church lobster events, many of which state the number of lobsters involved at each event. “The list accounts for at least 10,800 lobsters at 17 churches,” he said. “There are likely at least another 1,000 from five churches who gave vague responses.”

He added: “We would encourage anyone and everyone to reflect on their own attitudes about causing unnecessary suffering, and move towards a plant-based diet for their health, for the sake of the environment, and because it’s the right thing to do.”

PETA specifically cited St. Timothy’s Episcopal Church in Greenville, North Carolina. According to the church website, the church has sold more than 65,000 lobsters since the fundraisers began in 1978. Yearly, the effort has raised as much as $20,000 to benefit the local community.

PETA’s invitation raises important ethical questions, not only for Episcopalians, but all Christians, to wrestle with the way faith informs their daily lives and decisions, according to the Rev. John Porter-Acee, a priest in the Diocese of East Carolina.

“It is our call as Christians to try to reduce suffering in the world,” said Porter-Acee, a former environmental educator. “Every choice we make is a choice to pursue our faith in one way or another, and to think about investments and fundraisers and food choices as opportunities to decrease the amount of suffering in the world and to support entities that have that goal as well.”

But the issue is a complicated one. “If you’re going to do a fundraiser and encourage people to contribute and support it as a suffering-free fundraiser, perhaps one year instead of everybody buying lobster, they buy sweet potatoes,” Porter-Acee said. “But I don’t think we’ll raise $20,000 to benefit the community.”

Additionally, sweet potatoes — and other vegetables for that matter — are grown and tended by migrant workers who are not treated very well, “so there is a lot of suffering around vegetables, too.”

John McAteer, an ethics faculty member of the Episcopal Diocese of San Diego’s School for Ministry, said that Episcopalians generally consider vegetarianism a matter of personal conscience, “but it is not something theologians and ethicists have come to consensus about.”

The issue PETA raises about lobster boil fundraisers essentially involves such questions as whether or not it is possible to “torture” a lobster “or whether they are below the level of sentience that gives them that sort of ethical status. In other words, is it unethical to eat lobsters?”

While lobsters seem to react when placed into pots of boiling water and try to crawl out, “their brains aren’t developed enough to know what a pot is or understand that they need to crawl out,” he said. The question of whether crustaceans feel pain has been the subject of much research.

“PETA is against eating any animal, so I don’t think it is really about lobsters for them,” McAteer said. “If we stopped having lobster boils, they would come at us for having barbecues next.”

The organization has asked U.S. Roman Catholic bishops to end the practice of Lenten fish fries. It has also called Christians to a “ham-free” Easter.

“Ethically speaking, there is a much better case for eating lobster than for eating pork, beef or even chicken,” McAteer said. “Unless you’re a full-on vegetarian, then I don’t think a lobster boil should cause you any ethical problem.”