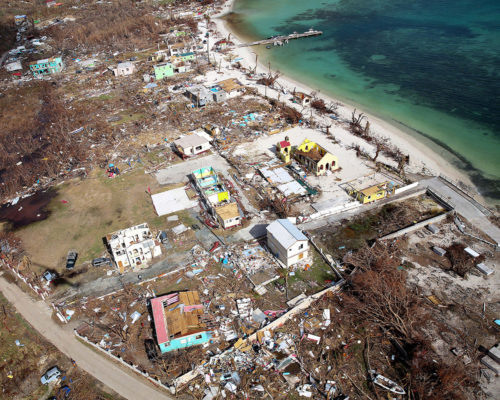 [Episcopal News Service] Yvonne O’Neal believes that she crossed paths with more than one angel in the last week in Spanish Town on Virgin Gorda. In the aftermath of Hurricane Irma, complete strangers helped her leave the decimated island and get back to her home in New York.

O’Neal, who was born on Tortola to parents from Virgin Gorda and grew up in Puerto Rico, had been in the Virgin Islands since July, when she came for an extended stay. In early August, she had gotten drenched in a massive rain storm during an Emancipation Day parade, but that experience was nothing like what was to come with Irma a month later.

She had decided, just before the Category 5 hurricane arrived, to relieve a family member who had been taking care of their elderly, bedridden aunt in Spanish Town. O’Neal rode out the storm with her dying aunt.

When Irma came ashore, “the wind came from north to south and there was debris flying,” she said, describing the scene in a Sept. 15 phone call with Episcopal News Service.

Some of the debris that Irma propelled through the air were jagged pieces of galvanized metal from a nearby building. “I thought to myself, if this comes in here we are dead,” recalled O’Neal, who will be a first-time deputy to the Episcopal Church’s General Convention next year.

Had Irma drenched the island, “I would not be talking to you. I would have been dead. I am convinced of that,” said O’Neal.

Then, suddenly the wind stopped and the sun came out. People went outside in wonder but were soon forced back inside as the wind began again, O’Neal recalled, this time coming from the south.

A video posted on Facebook by Caribbean Buzz Helicopters shows damage on Virgin Gorda, from its airport to the town of The Baths.

After Irma had fully passed, O’Neal wanted to get out and see what had happened to the town. That’s when the angels began appearing. They helped her find her way down familiar streets made unrecognizable by debris. A man offered to walk her to her house when she wanted to see what had happened to it. Other people told her she could not get there because of the surrounding damage.

She went with the man because she sensed she could trust him, that he only wanted to help. Once he helped her get inside her house, he turned to leave and O’Neal realized she did not know his name. “Benjamin,” he replied. She told him that he was an angel, thanking him and telling him that God would bless him.

Her aunt died Sept. 8, two days after Irma made landfall on the Virgin Islands, and O’Neal had to take her body to Tortola and report the death to the police.

By Sept. 10, she could use Facebook to tell friends that she was safe. “I have never seen such devastation in my life,” O’Neal wrote. “Irma razed these islands to the ground. Rich and poor are homeless. Many are hungry. We thank God for life.”

On Sept. 11, O’Neal knew she had to get off the island. More angels appeared. They told her about a man who anticipated two private boats arriving at the Spanish Town Yacht Harbor. The harbor, O’Neal said, was “a graveyard of boats” that Irma had shoved and stacked against each like fallen dominos. The man told her to pack her belongings, prioritizing them in case she had to leave things behind. They agreed on a time for her to be at the harbor.

While she was waiting for the boats, she saw other large and small boats bringing in supplies from Puerto Rico. A couple who skippered one of the small boats offered to take her back with them. The angel who had told her about the other boat urged her to leave when she could.

So, she agreed to get on the strangers’ boat. They, too, were angels, O’Neal said, taking her to Fajardo, in Puerto Rico. This was late afternoon on Sept. 12. From there she got to a house she owns. There was no food in the house “but I had a roof over my head” and dry clothes.

The next day she flew to Atlanta and then back to New York, landing at JFK airport late that night.

About 36 hours later, O’Neal said: “The number one thing I think about is that I am alive and that there wasn’t more loss of human life.”

The second thing O’Neal wants the rest of the church to know is that there are Episcopalians on all the Virgin Islands. “They’re faithful Episcopalians and they should not be forgotten,” she said. 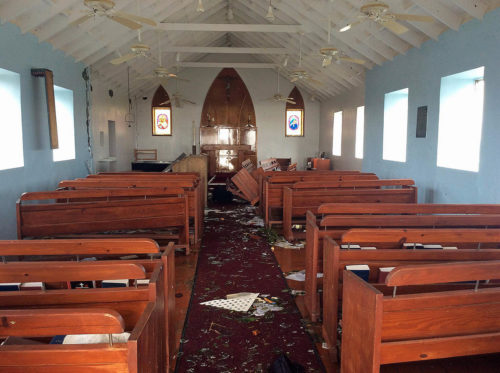 The Episcopal Diocese of the Virgin Islands consists of 14 congregations on five islands, some governed by the United States, others by Britain. The U.S. islands with Episcopal churches are St. Croix, St. John and St. Thomas. There are Anglican churches on Tortola and Virgin Gorda in the British Virgin Islands. Working with government officials from two countries, plus coordinating with other aid organizations, makes providing relief to a series of islands even more of a challenge than it would be when a region is hit by a Category 5 hurricane.

Irma is a “complicated disaster,” Abagail Nelson, Episcopal Relief & Development senior vice president for programs, told a webinar briefing on Sept. 14. She said organization staff members have been in texting contact with Bishop Ambrose Gumbs and others, including Rosalie Ballentine, a board member who lives on St. Thomas.

“They are so damaged,” Nelson said of the islands. “Our normal response is to send funding so that food and water can be procured locally.” However, the Virgin Islands, typically dependent on outside provisioning of normal daily supplies, are struggling to find available food and water, she said.

In addition to coordinating relief efforts being organized by the U.S. and British governments, including their militaries, and related agencies such as the Red Cross, Episcopal Relief & Development is working with the Anglican Alliance.

“Given the catastrophic situation there, we are going outside the box a little in how we respond,” Nelson said. “We’ve been working with the different militaries on how we can get resources in.” There are strong ecumenical networks that are mobilizing. “We’re working with the Adventists, the Mormons, Baptists, all with an eye toward getting stuff in there,” she added.

Many of the Episcopal churches in the diocese have windows blown out, holes in their roofs and shutters torn off. However, Nelson said churches are saying their communities need tarps to keep the rain out of homes and mosquito nets. And, of course, there’s no power, she added. 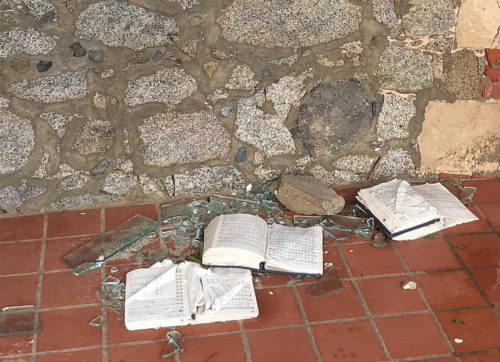 “The churches are damaged but not destroyed. They’re old churches, so it is a miracle to me that they’re still standing,” said the Rev. Judy Quick, a deacon from the Cathedral Church of the Advent in Birmingham, Alabama. She’s the Diocese of Alabama‘s co-coordinator for Episcopal Relief & Development and also chairperson for the companion diocesan commission.

What does Alabama have to do with the Virgin Islands? Since early 2016, the two dioceses have been building a companion diocese relationship. That partnership means Quick could connect with clergy from each of the diocese’s affected islands through texting, Facebook and email — at least with those who were able to find temporary Wi-Fi service.

“Communication is terrible, horrible,” Quick said. After Alabama’s devastating tornadoes in 2011, Episcopalians learned that when cell phones don’t work, texting can. It’s another way the partnership has helped.

As she reached people, she heard stories of churches already helping their neighbors. St. George’s Episcopal Church on Tortola could shelter more than 100 people, Quick found.

The Rev. Sandra Malone, priest-in-charge at St. Paul’s Mission on Tortola, lost the roof from her home, but she was out helping the congregation and British communities. “That’s powerful to me, to be the rock for the communities and to show that compassion,” Quick said.

Nelson told the ERD webinar that Episcopal and Anglican churches on the islands are “holding together and slowly consolidating for a wider relief response.”

“We’re very committed there and to the long-term recovery,” she said.

The Rev. Esther Georges, who ministers at St. Mary’s Episcopal Church in Spanish Town on Virgin Gorda, emailed Episcopal News Service on Sept. 15 to report that she was headed to what she called “the command center” to collect vouchers for her congregation to get food and water. 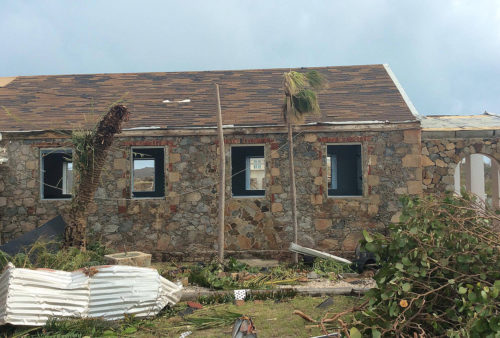 O’Neal visited St. Mary’s before she left Virgin Gorda. Irma toppled the stone church’s bell tower. It crashed into the cemetery, crushing some tombstones. The storm also blew out nearly every window in the church, and damaged the rectory and a building where, among other things, the congregation held an annual “Jazz on the Hill” concert.

The churches on St. Thomas are struggling, especially St. Andrew’s Episcopal Church, which had a lot of flooding, Quick said. Yet, while church leaders are still trying to check on their congregations, there have been no reports of serious injuries or deaths. But the devastation is sure to have an emotional toll, she said.

The connection between Alabama and the Virgin Islands is even more layered because there are partnerships from parish to parish. The diocesan partnership has always been a two-way relationship, with youth visits in both directions and other programs.

“It’s really a God thing that we can be there for them in this time in desperation,” Quick said. “It’s about walking with friends in good and bad times. That’s what this is all about.”