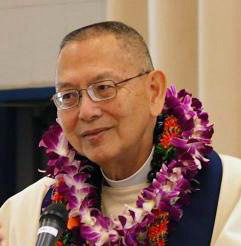 [Episcopal News Service] The Rt. Rev. Richard Sui On Chang, the fourth bishop of the Diocese of Hawaii, died Aug. 30 after a short illness.

Chang served from 1997 to 2006 when he was succeeded by Robert L. Fitzpatrick, who had been his canon to the ordinary.

He was the first Episcopal Church bishop of Chinese ancestry; he was born in Honolulu. Chang earned a Bachelor of Arts degree at Trinity College in Hartford, Connecticut, and a Master of Divinity degree from Church Divinity School of the Pacific, the Episcopal seminary in Berkeley, California. He also studied at the University of Hawaii.

George Richard Millard, the suffragan bishop of the Diocese of California, ordained Chang to the diaconate in March 1966. Then-Bishop of Hawaii Harry S. Kennedy ordained him to the priesthood six months later.

Chang served in several roles in Hawaii before becoming the diocese’s archdeacon from 1970 to 1974. After the first bishop of Hawaii, the Rt. Rev. Edmond Browning, was installed as the Episcopal Church’s 24th presiding bishop, Chang served as his assistant. He was the executive officer of the diocese when Browning was bishop in Hawaii.

Chang served for a time as vice president of the House of Bishops.

He is survived by his wife, Delia Chang, and daughters Holly and Hannah. A celebration of Chang’s life is set for Sept. 17 at the Cathedral of St. Andrew, Honolulu. Family visitation is 2 p.m. – 4 p.m., followed by the service.