[Episcopal News Service] A mid-1800s communion service that once was lost has now been found and returned home to Christ Church in Millwood, Virginia, but the story of its 162-year absence remains a mystery.

The latest chapter opens in late spring of this year in New Bern, North Carolina, when Cheryl Lawrence was sorting through boxes of donations to the local Knights of Columbus chapter for its semiannual yard sale. Lawrence knows her silver and wasn’t initially impressed with a tarnished and dinged pitcher she found in a box. Still, she put it aside and one day decided to polish some of the donated silver pieces.

As she worked on what seemed to be a pitcher, she could soon read the words “Cunningham Chapel From J.C. Terrell.” Lawrence, who said she loves to do research, turned to an internet search engine and typed the name of the chapel. 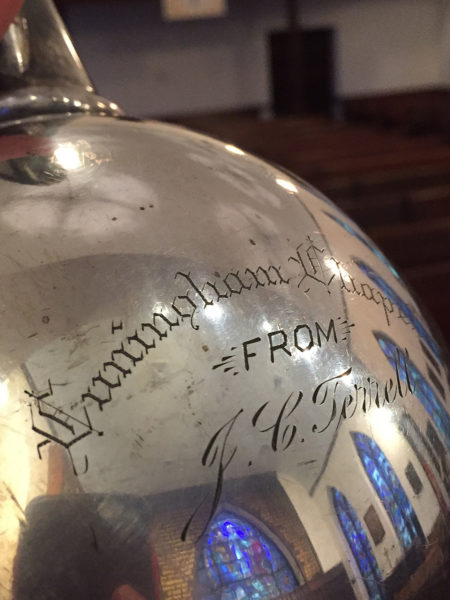 Christ Church’s stained-glass window reflects in the communion flagon that recently made its way home to Millwood, Virginia, after a 162-year disappearance. Photo: Christ Church

Then she searched for J.C. Terrell, who turned out to be a lawyer from Fort Worth, Texas, who had family in the Millwood area. He came to visit in 1856. The hallmarks on the communion set date it to the 1840s to 1850s. Lawrence consulted local cemetery records, which further tied Terrell to the area.

“That’s when I called the chapel,” she said.

Enter the Rev. Matt Rhodes, deacon in charge at Christ Church and Cunningham Chapel. He told Lawrence that the legend in the church says that someone either stole the silver during the Civil War – looted might be an appropriate term – or someone removed the silver to prevent it from being stolen. Millwood, about 70 miles northwest of Washington, D.C. in the lower Shenandoah Valley, and the surrounding Clarke County saw many Civil War battles.

Lawrence and her companions who handle the antiques and collectibles for the Knights of Columbus yard sale soon found among the donations two more pieces that match the pitcher. A chalice engraved with “CC” has trim matching what they now recognize as a flagon for communion wine. A second piece similarly marked and decorated turned out to be a pedestal-style paten.

They are made of heavy silver plate, and the hallmarks show they were made by what was then known as the Meriden Britannia Co. of Meriden, Connecticut. When the pieces were new, Lawrence said, they would have looked like sterling silver.

She called the service “just beautiful,” adding “We’re just really excited to get it back to them.”

Indeed, the set’s return, via FedEx and packed by the Knights of Columbus folks “like they were packing the crown jewels” in Rhodes’ words, is a boon to the congregation.

“One of the things I love about Clarke County and this congregation is they put a very, very high premium on preserving history,” Rhodes said.

“I love liturgy and I love history. When you get something like this it’s the intersection of the two,” he said. “But I have spent a lot of time thinking about how for the brief period that they were here in the church, the hands of the priests blessed them and elevated them, and the members of the congregation drank from the chalice. People who spent time in their homes before Sunday baking the bread to be used in Eucharist. Even the fact that people at the Meriden Company made this.

“It’s not just a communion set; it’s a narrative of all these different strands of lives that come in these three pieces.” 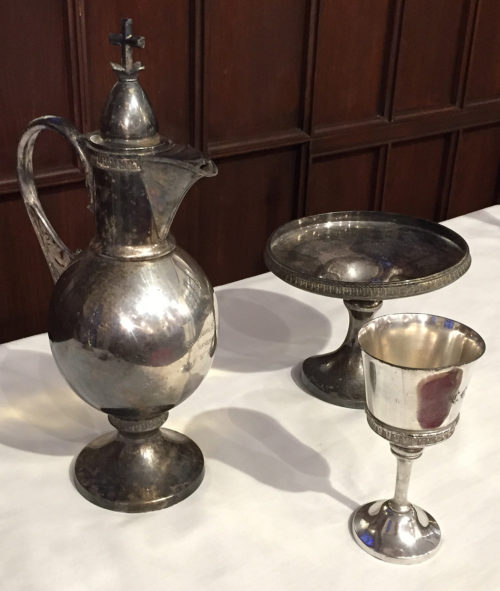 The three-piece communion service that Fort Worth attorney and one-time U.S. ambassador to the Ottoman Empire J.C. Terrell donated to Christ Church in 1856 is now back home. The set was discovered in a box of silver donated to the local Knights of Columbus yard sale organizers in New Bern, North Carolina. Photo: Christ Church

The latest chapter in this mystery ended on Aug. 27 when the Christ Church congregation got its first glimpse at the long-vanished communion set. The pieces sat veiled on a credence table in the aisle through the 10:30 a.m. service until Rhodes revealed the set at the end.

It was “quite moving” to watch the congregation admire the three pieces that were back home after 162 years, he said, adding: “It was a wonderful homecoming.”

The pieces need some work, and Rhodes and others are exploring how to get that restoration work properly done. “Then, depending on the condition, it would be wonderful to use it in a Eucharist again,” he said, “even if it’s just one time.” They hope to find a way to make the set a “visible part of the parish again” by displaying them.

Rhodes is also wondering if the “disappearance and loss for a century and a half before it is returned” requires that the pieces be reconsecrated.

But, the mystery remains: How and why did the service disappear, and where has it been since then?

A parishioner went through old vestry minutes and found mention that some silver had been removed from the church by an unnamed person. “We don’t know if they were stolen or hidden, or what circumstances were,” Rhodes said.

“It could have been any number of reasons it was removed,” he said of the set. “Safety, fear that it would be stolen; there’s a wide range possibilities.”

But then where did the set go for 162 years? No one knows.

The pieces came anonymously to the Knights of Columbus, which is not as suspicious as it might sound. Many folks simply leave boxes filled with items for the group to sell. The community knows that the semiannual sales are big moneymakers for the chapter of the Roman Catholic fraternal service organization. And, they know that the chapter puts the proceeds back into the community in the form of grants and other assistance.

Lawrence and Rhodes said they had hoped that publicity in the local New Bern newspaper about the mystery would have prompted the donor to get in touch. That way, Lawrence said, she could start tracing the set’s journey. For instance, did the donor have them in his or her garage? Did he or she buy them at a garage or estate sale? No one has come forward.

The people of Christ Church will continue their sleuthing, as will Lawrence in North Carolina.

Rhodes said there’s more to the sleuthing than simply solving the mystery.

“We would love to be able to thank the generations of people – whether it is a person or their descendants – that have cared for it.”