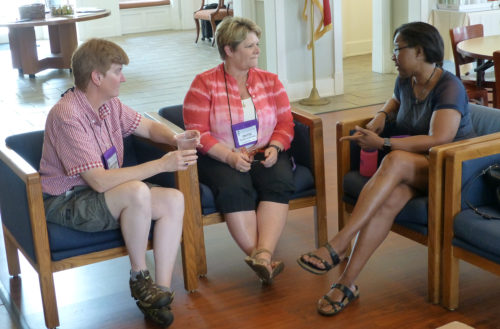 One of the goals of the College for Bishops is to connect new bishops. Diocese of Spokane Bishop Gretchen Rehberg (ordained March 18), left, and Diocese of Central New York Bishop DeDe Duncan-Probe (ordained Dec. 3) and Diocese of Indianapolis Bishop Jennifer Baskerville-Burrows (ordained April 29) share conversation after lunch on June 14. They were at the Roslyn Retreat Center in Richmond, Virginia, for the 2017 session of Living Our Vows, the college’s three-year formation program for new bishops. Photo: Mary Frances Schjonberg/Episcopal News Service

[Episcopal News Service] How do you learn to be a bishop? For most of the Episcopal Church’s life, new bishops learned on the job with little or no outside help.

It’s only in the last 24 years that the church has had a formal process for such learning. That process, run by the College for Bishops, is about to undergo a major transition.

Bishop F. Clayton Matthews, who leads the college in his role as the head of the presiding bishop’s Office of Pastoral Development, will retire June 30. He served in that role since 1998.

Matthews led the formation of the College for Bishops’ three-year program for new bishops, known as Living Our Vows, in 2004. The college also provides continuing education offerings for all bishops. Living Our Vows was developed after a multi-year study of bishops’ needs. The resulting program is designed to help bishops grow spiritually, vocationally and in “their capacity to provide the kind of leadership that the Church needs for the mission of Jesus to which we are called,” Presiding Bishop Michael Curry said.

The College for Bishops will leave the pastoral development office with Matthews when he retires. He will report to Curry and direct the college’s formation mission for another two years on a part-time basis.

Eastern Michigan Bishop Todd Ousley succeeds Matthews as head of the pastoral development office on July 5. That office will continue to support the House of Bishops and the presiding bishop with pastoral care of bishops, their families and diocesan systems; and mediation in Title IV disciplinary matters.

The College for Bishops has been part of the Office of Pastoral Development until now. However, its status within the governance structure of the Episcopal Church changed in 2010. The House of Bishops unanimously voted to incorporate it as a separate nonprofit entity. Matthews explained that the college is now owned by the House of Bishops. It has a $6 million endowment, according to Matthews.

All of the changes come as the Task Force on the Episcopacy considers the election, appointment, roles and responsibilities of the church’s bishops. General Convention asked in 2015 for the study. It also charged the task force with proposing to the 2018 convention a new process for discernment, nomination, formation, search, election and transition of bishops.

Some members of the Task Force on the Episcopacy are challenging the ownership of the college and the fact that it reports directly to the presiding bishop.

Participants in the 2017 session of Living Our Vows, the College for Bishops’ three-year formation program for new bishops, discuss (via teleconference) author Donna Hicks’ research about the role of dignity in conflict resolution. Photo: Mary Frances Schjonberg/Episcopal News Service

Living Our Vows – sometimes known around the church as “Baby Bishop School” – consists mainly of an annual one-week “residency” meeting. Some of the classes offered during the week are geared to whether a participant is a first-, second- or third-year bishop. They run the gamut from canon law to leadership training to dealing with the media. Bishops debrief each other on incidents that have occurred in their dioceses, offering them as a chance for all to learn.

A so-called “Hats and Sticks” session teaches bishops what to do with their miter and crozier, and when to do it. There is a session on the liturgies in the Book of Common Prayer at which only a bishop presides: confirmation and ordinations. 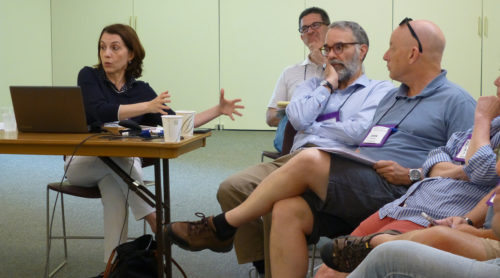 Building community is another goal of Living Our Vows. Beginning with a gathering of new bishops and their spouses each January, the college connects bishops elected around the same time. Some so-called “classes” are large – the 2017 one has 12 – while some are small, such as the Class of 2015 with four. Twenty-five bishops participated in the 2017 session, held June 12-16 at the Roslyn Retreat Center in Richmond, Virginia.

“You realize that you’re not alone,” said the Rt. Rev. Gretchen Rehberg, who became the bishop of Spokane in mid-March. The program, she said, is beginning to teach her to whom to turn for help in doing what she called “a singular job.”

Puerto Rico Bishop-elect Rafael Morales Maldonado said his first session of Living Our Vows comes at a “providential” time. He will be ordained as a bishop on July 22.

The Class of 2017 also includes bishops and bishops-elect from Central New York, Indianapolis, Northern Indiana, Pennsylvania, Los Angeles, Spokane and Western North Carolina, as well as the church’s federal ministries bishop and three from Toronto in the Anglican Church of Canada. That diversity is “a treasure for me,” Morales said.

“In many cases, their experiences are similar but in different contexts,” he said. 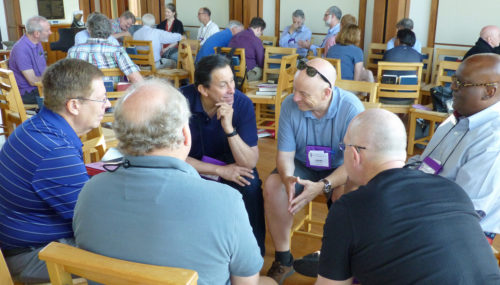 Quebec Bishop Bruce Myers, in the Class of 2016, represents a growing trend for the college: welcoming bishops from elsewhere in the Anglican Communion. There are currently four Canadian bishops participating. And the session at Roslyn was the last for El Salvador Bishop David Alvarado from the Anglican Province of Central America.

Myers said the college is giving him “some intentional formation around what becoming a bishop and serving in the order of bishops is all about.” That work happens with the Canadian bishops in the program (there is no such training in Canada), as well as Episcopal Church bishops.

“In a way, this is a great leveling place and we find the common ground of our episcopal ministry,” he said.

Living Our Vows pairs new bishops with a “peer coach” bishop. Myers’ is Bishop Steve Lane of Maine, whose diocese forms a common border with Quebec.

The Canadian bishops might, he said, bring to the college “a glimpse of a church that’s similar in many ways, shares a common territory and common context in many ways, but is dealing with those realities, perhaps, in slightly different ways simply because of our circumstances,” he said

For example, the abusive legacy of the residential school system obligates Myers’ church to find ways to “walk together with indigenous Anglican and indigenous Canadians outside the church in meaningful and appropriate ways.” That work might be an example to the Episcopal Church bishops, he said. 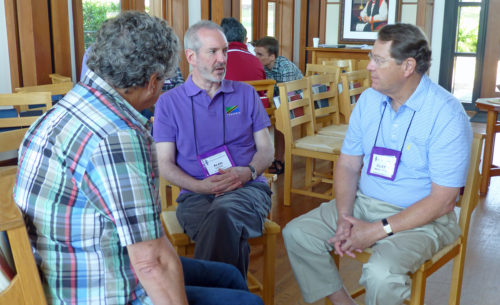 Massachusetts Bishop Alan Gates, who finished Living Our Vows with the recent session, said the college is valuable in two ways. First is the content. “There is no training track for bishops in advance of election because our polity, our theology, suggests that we don’t know in advance who will be called to be a bishop,” he said.

Second, he said, “it would be hard to overstate the importance” of the creating support networks, he said, noting that many bishops work alone in their dioceses without bishop suffragans or assistants.

“It’s widely misconstrued as a kind of exclusive attitude that bishops would feel the need for more time together,” he said. “But, for me, that’s not what’s driving it. It really is a yearning for that kind of support, knowing and being known by others who face the particular challenges of this.”

Collegiality in the House of Bishops is one of the college’s goals. In an interview with Episcopal News Service (available here), Matthews said the atmosphere in the house when he began his work was “toxic” and one of “total distrust.” This stemmed mainly from the wider church’s debate about the full inclusion of LGBT people in the life of the church, he said.

“We had to create an atmosphere where there was more respect within the house for the context in which bishops worked,” he said.

The presiding bishop said the plan is working. “I have seen it in the 17 years that I have been a bishop,” he said. “I have seen real development and real growth in our capacity to be a community of bishops and spouses that is real and genuine.”

“I’ve seen the impact of that in the house in terms of our increased capacity to be able to navigate complex and sometimes difficult terrain in decision-making as a community and still maintain relationships that bind us together,” he said.

The college helps bishops be “more deeply faithful and effective in the performance of our duties and in the living out of our episcopal ministry,” the presiding bishop said.

A bishop’s work and ministry are different from that of a priest, Curry said, recalling that an older bishop told him that when he first became a bishop he was really changing careers.

The college faces a great challenge in forming bishops who can help lead the Episcopal Church into becoming a branch of the Jesus Movement, he said. The coming question is how to train bishops so they can provide spiritual leadership to the church so it can “bear witness to a way of being Christians that actually looks something like Jesus of Nazareth?” 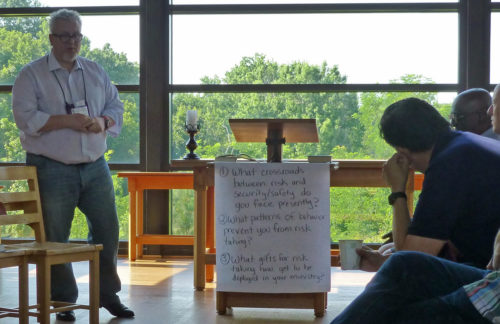 Diocese of Texas Bishop Andy Doyle, a member of the college’s board of directors, sets up the June 14 Bible study that was part of Living Our Vows, the college’s three-year formation program for new bishops. Photo: Mary Frances Schjonberg/Episcopal News Service

The presiding bishop chairs the college’s board of directors and nominates its members. Of the 19 current members, 14 are male bishops, four are lay people and one is a priest. The priest and one of the lay members are bishops’ wives.

In the next two years, Matthews said, he hopes he is “not having to spend all of my energy defending the right of the college to exist.”

The Very Rev. Gary Hall, a task force member, said he and others are not concerned about the existence of the college, but about its governance. If all orders of the church elect bishops, then the board of the entity charged with forming bishops ought to better represent all those orders.

Hall said that making the college a separate entity worries some on the task force because the curriculum and the logistics of the programs were developed when the college was part of the church. That intellectual property left the Domestic and Foreign Missionary Society (the name under which church is incorporated) when the college separately incorporated, Hall contended.

He sees nothing nefarious in the college’s effort.

“I think that the desire to make it a [nonprofit entity] was a desire to protect it financially, and nobody really thought through the implications of that in terms of the legal issues or the governance issues or accountability to the whole church.”

However, the move points to an attitude that Hall called “episcopal exceptionalism.”

“The culture of bishops in my working life has become much more distinct from the culture of the rest of the church,” he said.

This has happened in the same years that the church has moved to an understanding of baptism as being the “fundamental commissioning of ministry.”

“The culture of the episcopacy has gone in exactly the opposite direction,” said Hall, who was ordained in 1977. An insular formation process contributes to that trajectory, he added.

A bishop’s job is getting harder, Hall said, and he believes they need “all the professional education and support that they can get. That’s not the issue. The issue is we all have a stake in the education and wellness of bishops.”

The task force is due to make its proposals to General Convention via a “Blue Book” report sometime early next year. The suggestions will be debated during the July 5-13, 2018, meeting in Austin, Texas.