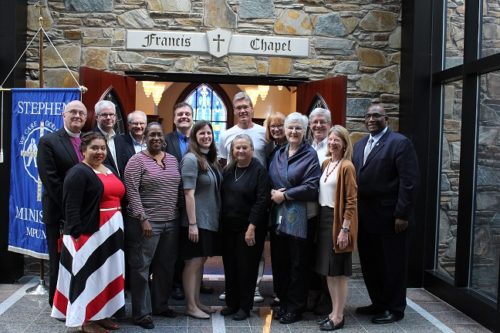 [Episcopal News Service] A group of Episcopalians and Methodists has released its proposal for full communion between the two denominations.

The 10-page proposal, titled “A Gift to the World, Co-Laborers for the Healing of Brokenness,” says it “is an effort to bring our churches into closer partnership in the mission and witness to the love of God and thus labor together for the healing of divisions among Christians and for the well-being of all.”

Montana Bishop Frank Brookhart, Episcopal co-chair of the dialogue, and Bishop Gregory V. Palmer, United Methodist co-chair, wrote in a recent letter that “the relationship formed over these years of dialogue, and the recognition that there are no theological impediments to unity, pave the way for this current draft proposal.”

In the coming months, there will be opportunities for feedback, regional gatherings and discussions on the proposal, according to a May 17 press release.

“We encourage you to reach across denominational lines to establish new relationships and deepen existing relationships by shared study of these materials and mutual prayer for the unity our churches,” Brookhart and Palmer wrote. “We believe that this proposal represents a significant witness of unity and reconciliation in an increasingly divided world and pray that you will join us in carrying this work.”

The Episcopal Church defines “full communion” to mean “a relation between distinct churches in which each recognizes the other as a catholic and apostolic church holding the essentials of the Christian faith.” The churches “become interdependent while remaining autonomous,” the church has said.

The Episcopal Church-United Methodist Dialogue Committee, which developed the proposed agreement, says the two denominations are not seeking a merger but that they are “grounded in sufficient agreement in the essentials of Christian faith and order” to allow for the interchangeability of ordained ministries, among other aspects of the proposed agreement.

“We are blessed in that neither of our churches, or their predecessor bodies, have officially condemned one another, nor have they formally called into question the faith, the ministerial orders, or the sacraments of the other church,” the group said.

The Episcopal-Methodist proposal also benefited from the fact that Anglicans across the Communion and Methodists elsewhere in the world have an on-going dialogue, the group said. The dialogue launched a report in 2015, “Into All the World: Being and Becoming Apostolic Churches”, describing its progress. The launch highlighted a then-new new relationship of full communion between Irish Anglican and Methodists churches, and the historic concrete steps towards an inter-changeable ministry.

The proposal for full communion outlines agreements on the understanding of each order of ministry. The ministries of lay people, deacons Episcopal priests and United Methodist elders or presbyters (elder is the English translation of presbyter) would all be seen as interchangeable yet governed by the “standards and polity of each church.”

Both churches have somewhat similar understandings of bishops, according to the proposal.

“We affirm the ministry of bishops in The United Methodist Church and The Episcopal Church to be adaptations of the historic episcopate to the needs and concerns of the post-[American] Revolutionary missional context,” the dialogue says in the proposal. “We recognize the ministries of our bishops as fully valid and authentic.”

The Episcopal Church and the United Methodist Church would pledge that future consecrations of bishops would include participation and laying on of hands by at least three bishops drawn from each other’s church and from the full-communion partners they hold in common, the Moravian Church and the Evangelical Lutheran Church in America.

The Episcopal Church currently is in full communion with the Evangelical Lutheran Church in America; the Mar Thoma Syrian Church of Malabar, India; Old Catholic Churches of the Union of Utrecht; the Philippine Independent Church; the Church of Sweden and the Northern and Southern Provinces of the Moravian Church. It is also engaged in formal bilateral talks with the Presbyterian Church (U.S.A.) and the Roman Catholic Church via the U.S. Conference of Bishops.

More information about the Episcopal Church’s dialogue with the United Methodist Church is here.

The work of the Episcopal-United Methodist Dialogue is enabled by two General Convention resolutions: 2015-A107 and 2006-A055.