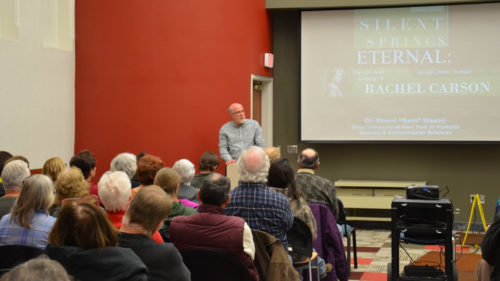 [Episcopal News Service] Easter comes less than a week before Earth Day this year. That closeness is more than a fact of the calendar for St. Luke’s Episcopal Church in Jamestown, New York. It’s a double calling to what the Rev. Luke Fodor terms “creation care.”

The congregation at St. Luke’s is at the center of a community project launched this Lent called “GreenUp Jamestown” that mixes Christian spirituality and environmental stewardship. GreenUp’s initial slate of events is filled with eco-themed lectures and panel discussions arranged with the help of several partner organizations in the city. It culminates with an Earth Day program on April 22, though Fodor hopes the scope and support will continue to grow.

“The more we can … connect again with our origins, then we’ll be so much healthier, not just in our bodies but in our spirits,” Fodor said.

That connection is more than theoretical, he said. When a priest on Ash Wednesday says “’we came from dust and to dust we will return,’ that means the Earth,’” he said, adding but much of modern society has become alienated from our dirt-bound biology. Fodor also laments that even though we still celebrate a Christian liturgy with deep agricultural underpinnings, we’ve lost touch with how our food gets to our table.

“People don’t have a real sense of creation care, so we need to do something,” Fodor said.

This type of “doing something” wasn’t at the top of his priorities list when Fodor first moved to western New York three years ago to take over as rector of the Episcopal church in this Rust Belt city known historically for its furniture manufacturing.

Fodor’s longtime passion for the environment already had begun losing its grip on his daily routine. As a younger man in New York City, he had biked everywhere. He was diligent about recycling. When he and his wife became parents, they chose cloth diapers over landfill-clogging disposables.

Some of those habits started changing when Fodor began serving at a church on suburban Long Island, starting with his increased reliance on a car over the bicycle. But in Jamestown he found a city closer to nature and God’s earthly creations than its industrial, manufacturing past may suggest.

Fodor pointed to one of Jamestown’s biggest draws, Chautauqua Lake, a natural jewel on the west side of the city. The region also is a popular bird flyway, and the city is the birthplace of Roger Tory Peterson, the renowned naturalist and bird artist. Jamestown has celebrated Earth Day from the beginning in 1970, when then-Mayor Stan Lundine helped coordinate a stunt involving a public display of several tons of dirt to illustrate how much pollution falls on the city. The stunt drew national attention.

“There’s a real history here of environmentalism,” said James Colby, a member of St. Luke’s who has been working with Fodor on getting GreenUp going.

Colby, 66, is retired after working as curator for the Weeks Gallery at Jamestown Community College, and one of his contributions to GreenUp will be to coordinate a 14-foot art installation at St. Luke’s made of illuminated mason jars. But that is set for next year. In this first year, he and Fodor have aimed primarily to spark greater environmental awareness in the community while enlisting many collaborators, including the Roger Tory Peterson Institute of Natural History, the Robert H. Jackson Center and Jamestown’s Audubon center.

St. Luke’s, then, is “sort of a center organization with spokes that reach out to people already working with the environment,” Colby said. 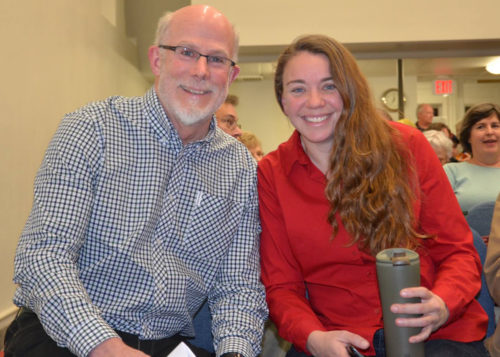 The GreenUp lecture series’ kickoff event, held March 8 at the public library in Jamestown, was a presentation by Sherri Mason, a chemistry professor at the State University of New York at Fredonia. Fodor said a crowd of about 100 people came to listen to Mason talk about her research on the Great Lakes and about the environmental legacy of writer Rachel Carson.

The library was chosen as the venue to bring the project into the community, not isolate it in the church. Even so, before attending Mason’s presentation, about 25 parishioners joined Fodor for a brief service in the St. Luke’s chapel in which they prayed for forgiveness for humanity’s past abuse of the environment and vowed to recommit themselves to being Earth stewards.

Fodor will lead the next two programs in the GreenUp series, on March 15 and 22, at St. Luke’s. One will look to the Celtic saints as models for “green spirituality” and the other will mine Genesis for an answer to the question “Did god really propose human domination of creation?”

The president of the Roger Tory Peterson Institute is scheduled to speak March 29 at the church about Jamestown’s “urban nature,” and the Lenten lecture series concludes April 5 with another presentation at the library, this time a panel discussion of Rachel Carson’s “Under the Sea-Wind.”

Other events are scheduled beyond the Lenten series, including an evening of prayer, art and music on Earth Day at St. Luke’s.

In this first year, the diversity of topics and community organizations was by design, Colby said. “What we tried to do this year is to give everyone a piece.” The future of GreenUp Jamestown may entail tackling certain projects and issues more intently, such as supporting cleanup efforts in Chautauqua Lake or promoting solar energy and other renewable sources.

Colby, who has enough solar panels on his home to provide for his own energy needs, calls climate change “the biggest challenge that we’re facing.”

“I think as Christians, it’s an obligation to bring society forward, and clean, renewable energy is one of those areas,” he said.