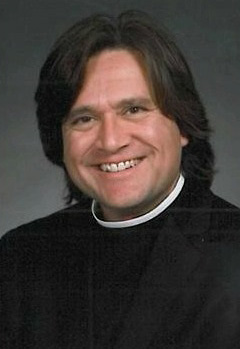 [Episcopal Church Office of Public Affairs press release] The Rev. Bradley S. Hauff has been named the Episcopal Church missioner for indigenous ministries, a member of the presiding bishop’s staff.

As a member of the Episcopal Church Ethnic Ministries Office, Hauff will be based in Minneapolis, Minnestora. Hauff will begin his new position on Feb. 21.  At that time he will be available at bhauff@episcopalchurch.org.

Hauff has been rector of All Saints’ Torresdale Episcopal Church, Philadelphia, Pennsylvania, (Diocese of Pennsylvania) since 2012. He previously served in congregations in the dioceses of Florida, Minnesota, South Dakota and Texas. Hauff is enrolled with the Oglala Sioux Tribe, headquartered in Pine Ridge, South Dakota. He is a speaker, presenter and author on various Native American topics and issues.

For the church, he served on the Task Force for Reimagining the Episcopal Church (TREC); Board of Examining Chaplains in the Dioceses of Florida and Pennsylvania; and the Board of Trustees and adjunct faculty member at Seabury-Western Theological Seminary, Evanston, Illinois.

In Minneapolis, he was the director of the adolescent program for the Domestic Abuse Project.