[Episcopal News Service] What began as a small gathering with a big dream has transformed into a commitment by millions of Christians around the world to pray for one another.

First begun in 1908, the Week of Prayer for Christian Unity runs Jan.18-25 with hundreds of celebrations and gatherings: from Houston to Boston; Waterloo, Belgium, to the Vatican; in Episcopal and Roman Catholic cathedrals and churches; with United Methodists and Lutherans and scores of other denominations.

“The Week of Prayer for Christian Unity reminds us every year that it is Jesus’ prayer for us all to be one,” said the Rev. David Simmons, rector of St. Matthias Episcopal Church in Waukesha, Wisconsin, and president of the Episcopal Diocesan Ecumenical and Interreligious Officers Association. “The idea of Roman Catholics and Protestants sitting down and praying together 150 years ago was almost unthinkable. Today, so much has changed. It’s a time to celebrate how far we’ve come, and a time to look at the long road ahead of us.” 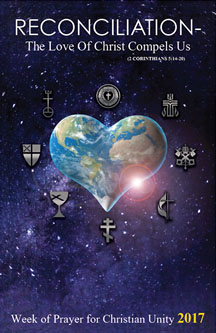 The 2017 Week of Prayer poster. The image this year reminds the viewer of the universe that is seeking to join together in the unity of Christ’s love and is being compelled by Christ to be reconciled. Created by the Reliance Graphic Design of Canon, Georgia.

Although it’s difficult to determine exactly how many Episcopal congregations are participating in the Week of Prayer for Christian Unity, numerous services are planned across the country and around the world. In Wisconsin, Episcopalians, Lutherans, Roman Catholics, and United Methodists will come together to host a Taizé service on Jan. 25. All Saints’ Episcopal Church in Waterloo, Belgium, will offer an ecumenical worship service on Jan. 18, with a forum led by an Anglican scholar and religion historian.

Christ Church Cathedral in Houston, Texas, opens its doors for a Unity Service on Jan. 18. Although this is the fourth year for the Concert of Praise and Ecumenical Prayer Service in Houston, it’s the first time that the Episcopal cathedral is hosting.

The cathedral considers the opportunity an honor and privilege, said the Rev. Art Callaham, canon vicar. Generally, the Houston community uses the liturgy prepared and offered by the international Week of Prayer for Christian Unity organizers. But the music is reflective of particular traditions. This year, the service will offer the liturgical experience of choral evensong – a deeply Anglican tradition.

“There was a lot of head-scratching and wondering when we first mentioned this idea,” admitted Callaham. “It’s not common in a lot of the Christian traditions. But the service not only gives us this unified experience of worshiping and praying together, but we have an opportunity to share what makes and keeps our traditions unique.”

Callaham recalls the words of St. Paul that each gives according to ability. “This applies at both the individual level but also the congregational and denominational level,” he said. “We have a variety of gifts. … When we see these all knit together, it is a beautiful thing. We are not trying to rub out what makes us different to create some homogenous whole, but rather when we act of our giftedness, we bring together our differences into something that none of can create or support individually.”

Indeed, for the Rev. Margaret Rose, deputy for ecumenical and interreligious relations for the Episcopal Church, this understanding of ecumenism is a guiding principle.

“Ecumenical work is not so much about creating something that has not been before, but about revealing what God created in the beginning,” she said. “We find ways to explore our unity, not conformity.”

The theme of this year’s Week of Prayer for Christian Unity builds upon that concept: It honors the 500th anniversary of the beginnings of the Reformation. “Reconciliation – The Love of Christ Compels Us,” calls on Christians to examine the concerns that sparked the Reformation and to acknowledge the pain caused by deep divisions among Christians. 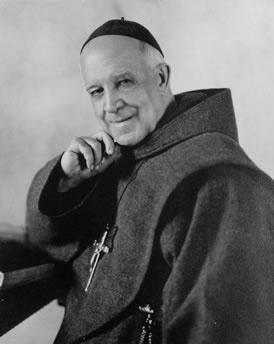 The Rev. Paul James Francis Wattson, SA, was the founder of the Week of Prayer for Christian Unity, which traces its history to 1908.

The Week of Prayer for Christian Unity traces its history to 1908, when the Rev. Paul James Francis Wattson, then an Episcopal priest, initiated the Church Unity Octave. Wattson founded a religious order, the Franciscan Friars and Sisters of the Atonement at Graymoor in Garrison, New York, in the late 1800s. Committed to a reconciliation between the Anglican and Roman Catholic churches, he believed that “a time set aside for prayers and seminars would hasten Christian unity,” according to the Graymoor Ecumenical Interreligious Institute. Wattson was joined by the Rev. Spencer Jones, an Anglican priest serving in England, in promoting and advocating for the week of prayer.

Wattson ultimately was ordained into the Roman Catholic tradition, but his commitment to ecumenism continued. The founders decided to settle the event between the feast of the Chair of St. Peter on Jan. 18 and the Feast of the Conversion of St. Paul on Jan. 25.

“It was such a breakthrough when these prayers for unity first started,” said Richard Mammana, secretary of the Episcopal Diocesan Ecumenical and Interreligious Association. “There was a lot of hesitation about Christians even praying together, let alone collaborating on projects. … But from the very beginning, Paul Wattson said, ‘We can do this very basic thing. We can pray together.’ ”

This devoted time to praying together has begun to break down barriers, said Mammana. “We begin to see we have more in common across denominations than we imagined.”

Over the years, Rose has seen the rise and wane of interest in ecumenism and participation in the Week of Prayer for Christian Unity.

“We’re back on the rise,” said Rose. “We understand the need for conversation. We are in a very divisive time, and the need for Christians to find a way to have a common voice, especially in prayer, is critical. We are in deep need of reconciliation.”

Further, said Simmons, many denominations are shrinking in size and influence in this post-Christian age.

“The reality of this time is forcing us to work together,” said Simmons. “In small-town Wisconsin, we used to have the luxury of each denomination having its own congregation and pastor. That’s no longer the case.”

Regardless of what is prompting an ecumenical revival, Simmons is excited about the opportunities to collaborate with other denominations on issues of poverty and hunger, the status of women, and other areas of advocacy.

“The Week of Prayer for Christian Unity is a way for us to liturgically remember the reality of what we’re trying to live into. The real work of ecumenism is what happens day-to-day among churches in communities,” said Simmons. “It’s not an end in itself. It’s supposed to lead us into greater conversation. But it’s a good place to start.”