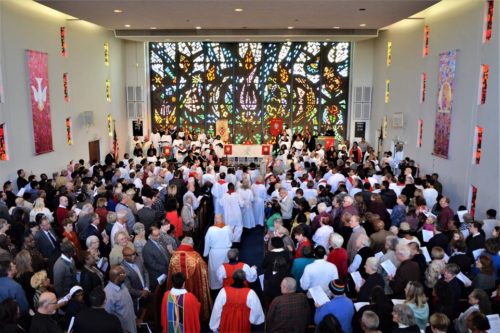 [Episcopal News Service – Los Angeles] Presiding Bishop Michael Curry invoked the prophet Isaiah and Robert Fulghum’s, “Everything I Need to Know I learned in Kindergarten,” charming and challenging a packed Jan. 15 celebration of Martin Luther King’s birthday in Los Angeles, to move forward in tough times is by seeking “ancient wisdom … tried and true and tested.”

Curry spurred hundreds of Episcopalians and Lutherans at the historic joint celebration to laughter, applause, cheers and a standing ovation. He echoed Isaiah’s theme “Look to the rock” (51:1-2) with his characteristic energetic, extemporaneous and whooping preaching style, attributed to the influence of his grandmother, “a dyed-in-the-wool, rock-rib Baptist.”

While acknowledging current political uncertainty and ambiguity, Curry emphasized themes of unity, love and building relationship: “It is fitting that we should be observing the birth of Dr. Martin Luther King at this moment and this time. We need him seriously now.”

Bishop Guy Erwin of the Southwest Synod of the Evangelical Lutheran Church in America called the joint gathering “historic” and welcomed worshippers, including Curry and other Episcopalians, as well as ELCA Presiding Bishop Elizabeth Eaton, Los Angeles Mayor Eric Garcetti and representatives of the Los Angeles Police Department.

Erwin also thanked Bishop Suffragan Diane Jardine Bruce of the Episcopal Diocese of Los Angeles for the “great joy” of the close working relationship that allowed the two churches to collaborate on the King celebration. Later, at a panel discussion, he also heralded a joint collaborative anti-gun violence task force.

Bruce conveyed greetings from Los Angeles Bishop Jon Bruno, who was unable to attend after a minor slip and fall on ice during a visit to Oregon. “This is our first real joint multicultural Martin Luther King service between the ELCA and the Episcopal Church, and I hope it’s not the last. We can top anything,” Bruce said.

Worshippers packed the multi-lingual celebration, held at Westchester Lutheran Church, near downtown Los Angeles. It featured the rousing music of Canon Chas Cheatham and the Episcopal Chorale Society, and Lutheran choirs. The service, at times both poignant and humorous, may be viewed here. 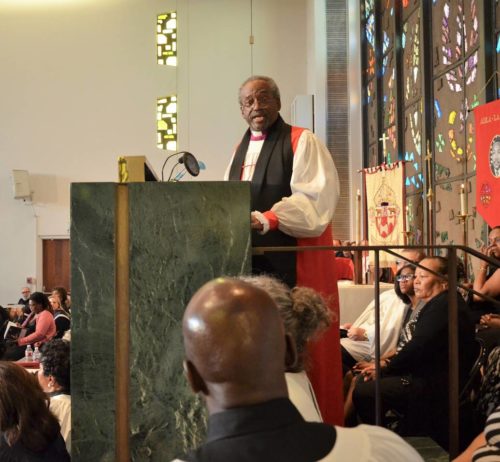 Amongst applause, Curry told the mayor, who also addressed the gathering, “We need political leaders like you. We need you.”

Garcetti told worshippers the diversity and purpose of the gathering “reminds us of what is possible. I feel at home here, the product of a Catholic father and Jewish mother who compromised and sent me to an Episcopal school,” he said amid laughter.

Acknowledging the current tense political climate, he echoed King’s edict to “stand in someone else’s shoes … and let their stories open our hearts and souls.” Especially those who are vulnerable, like “students (who) will go to school this week in our city wondering if their parents will be home when they get home as the administration changes.

“Students who will be making decisions whether to drop out of school because they won’t have hope or a job. When we see people returning from prison wondering will I have another pathway when I get back.”

Now is the time for both prophets and pastors, Garcetti said. “We must chart, as Dr. King did, where we need to go, but we also need to put out our hand to our neighbor and make sure we take them with us.”

Noting that King’s dream encompassed both racial and economic equality, he challenged worshippers to use “the power that we have” by standing together. That power, he said, enabled Los Angelenos recently to increase the minimum wage to $10.50, compared to a $7.25 federal minimum wage, and also to pass a homeless housing initiative.

“Know that what we feel in our hearts, what we think in our heads and what we must move forward with in our guts in these coming days, is that Dr. King would expect us not just to sit here and complain but to go out there and do something.”

Curry’s sermon evoked the image of the “Sankofa” bird, a Ghanaian symbol “that reminded people that the way into an uncertain future is by knowing how to look back and to glean wisdom from the past and strength from the ancestors so that you can go forward in uncertain and ambiguous times.”

He recalled the 1991 discovery of a colonial-era slave and free African burial ground in lower Manhattan, now a national monument. Etched into one of the surviving wooden caskets, workers discovered that symbol, of the Sankofa, which translated to English means roughly “go back and get it.”

“The Hebrew prophet understood this,” Curry said, referring to Isaiah, who preached during the Jewish dispersion. “Listen to me, you who pursue righteousness … in a time of real polarity and uncertainty and profound division…. Listen to me, you who seek the Lord. Look to the rock … to the ancient wisdom. Listen to the old, tried and true and tested ways.”

“The prophet (Isaiah) knew it … he was doing Sankofa. Look back to the wisdom of the past. Bring it into the present to go into the future. This was at a time when Jewish people found their world disrupted. Their world had been one way, one day, and the next, a nightmare.

“These were days when as James Weldon Johnson (“Lift Every Voice and Sing”) says, these were the days when hope unborn had died … and it is in this context that the Hebrew prophet spoke to his people. Listen to me, you who seek God’s dream in the midst of a nightmare … you who believe in love.

“Look to the rock whence you were hewn and the quarry whence you were dug. Look to Abraham. Look to Sarah. Look to Martin. Or, better yet, look to Jesus. The truth is … we ignore the wisdom of the past at our peril.”

Citing the lessons in Fulghum’s book, such as sharing your things and playing fair, Curry sparked laughter by asking: “Can you imagine Congress with this?”

Returning to the “deep roots of who we are” by honoring the nation’s foundational principles of inalienable rights, life, liberty and the pursuit of happiness, Curry said “there, we will find our way forward as a nation.”

He cited the “Letter From a Birmingham Jail” a turning point in the civil rights movement, in which King instructed activists to meditate on the life and teachings of Jesus as they prepared to march. “Remember the nonviolent movement seeks justice and ultimately reconciliation; never victory,” King wrote.

In a message echoing the tenets of Jesus they were also instructed to live in love “so that all God’s children may one day be free.”

Not, said Curry, “because it’s easy, but because love is the only way.”

He added: Fashion a world “that treats everybody like a child of God … then America will truly be America and then when we celebrate Martin Luther King’s birthday, what a great day it will be. We’ll be able to say Free at Last, Happy Birthday Martin King.”

Curry joined a panel discussion after the service. Panelists said the church can most effectively begin to live out King’s dream by building relationships in their communities.

The ELCA’s Eaton said a pastor formed a relationship with local police in the wake of the 1999 Bronx, New York, killing of  Amadou Diallo. Diallo was a 22-year-old West African man shot more than 40 times by police who mistakenly thought he was carrying a gun.

Rather than adopting an “us-versus-them mentality,” that pastor adhered to King’s vision of “us together,” she said.

Commander Phil Tingirides of the Los Angeles Police Department’s South Bureau, said the police partner with churches regularly because “there is an expectation you are leaders within the community, a place where people come to hear how to be good people, to hear how to reach out to people in need.”

“The vast majority of people involved in crime are people in need” who have issues with love, anger management, and issues economically and mentally, he said.

“This service we went to today to me was amazing; you had people from so many diverse backgrounds, different religions, differing beliefs and that’s how we are going to solve a lot of the race issues,” he said. “By getting to know each other, by reaching out and understanding each other. Churches are a place for that. You have a huge role. It’s not one that ends on Sunday when the doors close.”

Los Angeles Episcopal Bishop Coadjutor-elect John Taylor said that, while the early years of the civil rights movement were about changing discriminatory laws, in later years King spoke out against the Vietnam War and “called for a true revolution of values, to try to think of a way for society to overcome structural and economic inequities and move forward together.”

Curry agreed that churches can be “bridge communities bringing together people … that we might not be in relationship with. That, in itself, is part of the knitting together of the fabric of the social contract that we need in this country that’s the basis for any democracy to be able to work.”

To an 18-year-old who pondered how young people might help make a difference, Curry said: “You have to be wise, be smart. Pay attention to yourself. Don’t be afraid to stand for what’s right and to help somebody who doesn’t have anybody to help them.