Editor’s note: This is the third in a continuing series about the reinvention of the Episcopal Diocese of Fort Worth. Other stories in the series can be found here.

[Episcopal News Service – Hurst, Texas] At first glance, Village Plaza looks like any other shopping center in the Fort Worth metro area – until you see that there’s not one but three  storefront churches. The newest, situated between Yori, an Asian fusion restaurant, and Thai Thip restaurant is St. Stephen’s Episcopal Church.

The shopping center is the third place St. Stephen’s Episcopalians have called home since 2008. First, there was the local Women’s Club building and then the Northeast Wedding Chapel. Each place was limited by the cost of rent and when it was available. So, some members went looking for a new place and the idea of moving to a shopping center came up because, as Diane Snow put it, they thought such a location “might be appealing to non-traditional church goers.”

The Episcopal Church Building Fund helped the congregation lease the space that had once housed a dance studio where one member’s daughter took classes years ago. “It was quite a risk in getting started here,” Snow said, explaining that the members wondered if it had enough room, and no one knew how long they would be there.

They took the risk, gutting the space and turning it into a multipurpose sanctuary in 2014. And, while for most Episcopalians the image of a traditional church with stained glass windows and a big organ symbolizes the presence of the holy, the Rev. Bob Gross, a formerly retired priest who now serves the congregation, said, “I’ve felt the Holy Spirit here.”

Others have, too, and newcomers have arrived. Some bring children and so the congregation offers Sunday school – in the kitchen right behind where the altar is current placed. It’s a good thing that Gross “has a nice booming voice,” said Rebecca McKneely, a member of St. Stephen’s since 1992.

St. Stephen’s is finding ways to minister to the community outside of Sunday. It is one of the saints of the 4 Saints Food Pantry. The members also collect food for the Fort Worth AIDS Outreach Center and they regularly cook supper at the Ronald McDonald House of Fort Worth. 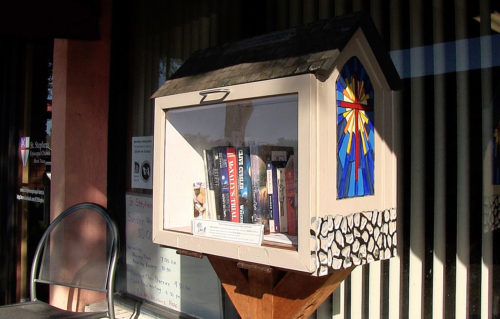 And then there’s their Little Free Library out front. It looks like a little traditional church, complete with painted stained glass windows, a red door and a “slate” roof. Beside it are two chairs and anyone is welcome to take a book from the small collection inside. Each book comes with a St. Stephen’s bookmark.

The library has become an outreach effort in an unexpected way. One day a woman stopped by the library while shopping in the Village Plaza. She took a book back to the elderly woman for whom she works as a caregiver. Now the two women make a weekly trip to the library as one way for the older of the two to be outside of her house.

The lesson from St. Stephen’s story for the rest of the Episcopal Church? “Anything is possible if you will think outside the norm instead of ‘we’ve always done it that way,’ ” says Gross. “Think of ways to do it differently and each location is going to be slightly different but there are people that need to be reached out to.”

Snow, who joined St. Stephen’s in 1977, agreed. “From the very beginning, it has been extremely humbling to know what the early Christians experienced. All they had was each other and all we had was each other but we did have a lot of miracles happen along the way.”