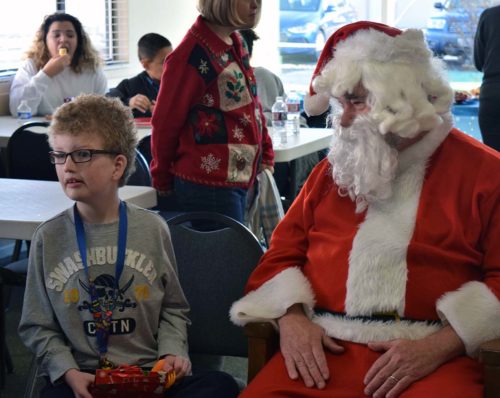 The Rev. Andrew Kadel, interim priest-in-charge at St. James’ Episcopal Church in Lincoln, California, as Santa, listens to the wishes of a young participant during the Christmas party after the service. Photo: Paula Schaap

But on Dec. 17, the parish had prepared its worship space for a different kind of service – a Christmas service for special-needs children and their families.

Just as the Christmas story is one story of journeys – the young couple looking for a place to have their baby, the shepherds and the three wise men looking for the savior – the evolution of St. James’ service was also a journey, one that began with the mother of an autistic child who wanted a way for her son to be in church. The mother’s priest, the Rev. Andrew Kadel, interim priest-in-charge at St. James’ connected with the Rev. Sarah Quinney, assistant rector at St. John’s Episcopal Church in Roseville, who wanted to bring the children she works with as a music therapist into the church she loves.

For Quinney, who led the special-needs service at St. James’, it was a chance to develop the kind of service she had wanted to see happen since she went to seminary at Church Divinity School of the Pacific. As a music therapist experienced in working with children on the autism spectrum and other special-needs children, Quinney has a passion for finding ways to help them enjoy worship with the rest of the church. 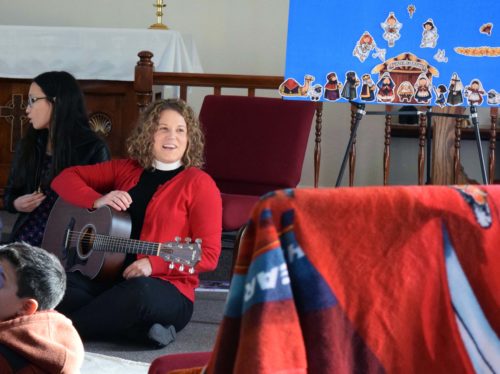 When she was in seminary, Quinney developed a Eucharist for autistic children as a project for her liturgics class, a service she presented at a youth ministry day sponsored by CDSP and the Diocese of California. Though it was a good way to work out the theology of such a service and invite discussion from the attendees, children weren’t present. So Quinney, now assistant rector at St. John’s, Roseville, California, still hadn’t seen her theory put into practice.

Until St. James’ came to her for her expertise.

Making connections in the diocese

The congregation is in an agricultural center, north of Sacramento, that is experiencing some of the highest rates of suburban growth in the nation, mostly from retirees, but also from families attracted to the region’s lower-cost, newer housing.

Maria and Drew Johnston and their three boys are one of those young families who live in Lincoln community and attend St. James’. The Johnstons’ 13-year-old son, Braden, is autistic and his oldest brother has been diagnosed as being on the spectrum with Asperger’s Syndrome. Tyler, their middle son, is “neuro-typical,” Maria Johnston said, as she described a desire to see a service that could include her family. And not only her family.

“It’s a joyous way to help families who feel isolated,” she said, speaking from her own experience. “We want the families to know that we hear them, we see them. They are precious to us, as they are to God.” 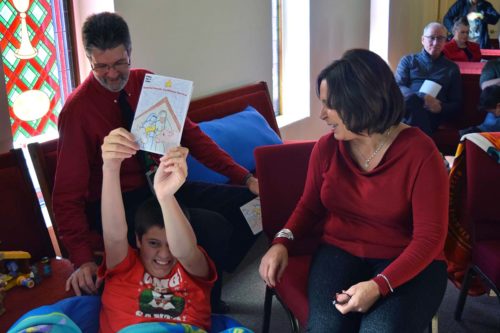 Drew and Maria Johnston with their son, Braden, who is holding the picture he drew for the special-needs Christmas service bulletin. Photo: Paula Schaap

But having Johnston’s desire turn into a full service needed connections to someone who could support that commitment while also figuring out a liturgy that would work. The Diocese of Northern California has been trying to strength its ability to connect people with resources elsewhere in the diocese. One way is through a reorganized deanery structure and it was the deanery structure that made the special-needs connection happen.

When the Rev. Cliff Haggenjos, the rector at St. John’s and dean of the Central Deanery, heard about Johnston’s plans to start a service, he referred her to Quinney, said Kadel.

Quinney, Johnston and Kadel met a number of time to work out the mechanics of the service and the physical layout to make sure all felt welcomed and safe. Johnston’s son Braden also got involved – a gifted draftsman, he drew and colored the cover for the service program.

Another key element was involvement of other Lincoln churches, Kadel said, including Grace Lutheran Church, where Pastor Judith Morgado was an enthusiastic supporter.

“It’s very important that this kind of service be a community service and not about a single parish or denomination,” he said. “We need to provide a time for relaxed and non-judgmental worship for families who have all sorts of pressures on them.”

Hence the stuffed animals. And the beanbag chairs because autistic and other special-needs children often need something that makes them feel safe when too much stimulation overwhelms them.

The parish had always been supportive of including special-needs children. Two years ago, there was a small service that told the story of Noah’s Ark, done by the Rev. Bill Rontani, the rector at the time, in honor of April’s Autism Awareness Month.

This, however, was the parish’s first special-needs service for a major holiday. And with all the stress that those holidays bring, organizers were uncertain whether families, who have all the extra pressure of a special-needs child, would be able to come. 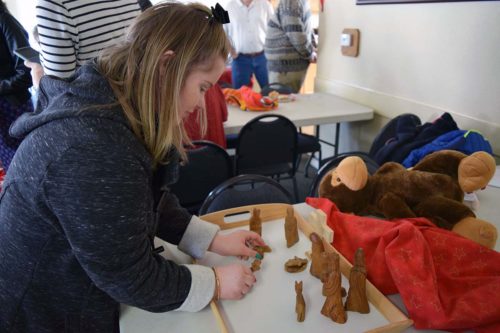 The appointed hour arrived. Parish members who had helped rearrange the church to make a safe space in front of the altar for the children sat waiting in the back pews. The children and their families began to enter. Some of the children made a beeline for the front and the stuffed monkeys. Some hung back, preferring the safe arms of their parents.

Quinney asked a time-honored question: “Does anyone want to hear a story?”

Using wooden carvings of the nativity scene to keep the children’s attention, Quinney told the Christmas story – she described it as a stripped-down version of the one used in the Godly Play version. Colored light from a stained-glass window fell on a boy’s face and the face of the monkey he cradled, as Quinney told them about the angel who told the shepherds: “Run, hurry, go to Bethlehem. A baby has been born. A baby who changes everything.”

One girl became restless and was helped out by her caregiver, who made soft chirping sounds to distract her. But the others stayed with Quinney’s narrative all the way through to the end. Then, they sang, “We Wish You a Merry Christmas,” and sat through a short closing prayer that ended with, “Go forth to eat cookies.”

At the Christmas party in the parish hall, Natalie Cooper said she had brought her oldest, son, a special-needs child, along with his younger brother and sister. She said she was happy for “all three kids to connect to the story.”

Cooper looked over at her eldest, who had installed himself on a chair next to Santa Claus – Kadel in a Santa costume – after receiving a treat bag.

“It’s huge that he’s getting so much time with Santa,” she said.

It was also true for a parishioner from Grace Lutheran, an older woman with Down syndrome, who declined to name what she wanted for Christmas, insisting simply, “I love Santa.”

St. James’ is already talking about using their experience with Christmas to develop a special-needs service for Easter.

— Paula Schaap is communications director in the Diocese of Northern California.