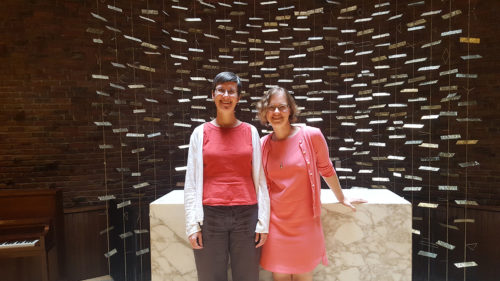 The Rev. Kari Jo Verhulst (left) and the Rev. Thea Keith-Lucas in the Massachusetts Institute of Technology chapel.

[Episcopal News Service] The group sometimes jokes that they should be known as the “Scurvy Prevention Society” instead of the Lutheran-Episcopal Ministry. To reach Massachusetts Institute of Technology college and graduate students who often live on free pizza and Ramen noodles, the ministry offers a homemade meal each Wednesday night cooked by the chaplains – who both happen to be vegetarians.

The students “tell us they’re trying new foods for the first time,” said the Rev. Kari Jo Verhulst, the Lutheran chaplain. “They’re actually getting some vegetables!”

The home-cooked meal is just part of the appeal for the 10 to 15 students of the blended Lutheran-Episcopal Ministry in Cambridge, Massachusetts.

“This group made me realize that there were other Christians who thought similar things that I did,” said Lindsay Michelle Sanneman, a second-year graduate student. “It made me feel like I was not alone.”

Sanneman attended the weekly worship service and meal at the beginning of her first year of graduate school. After trying out several other churches and groups, Sanneman knew she had found a place to belong, and she rearranged her schedule to leave Wednesday nights free.

Eighteen months later, she is the president of the ministry.

Of course, the people drew her into the ministry. But she also believes that the very nature of the ministry’s blended history as a two-denomination group has created an atmosphere of openness, hospitality and a willingness to look for what binds them together instead of what drives them apart.

“Within Christianity and between the denominations, there are historically so many divisions,” said Sanneman. The Lutheran Episcopal Ministry is a model “of unity in the Christian church… . We learn that the core of our beliefs in the same, and that we’re really not that different.”

This sentiment of finding common cause and shared beliefs is a strong thread among the leaders of the campus ministry.

“I think it’s really powerful to offer a place that values open inquiry and affirms all people – and at the same time is really rooted in the gospel and in the hope of redemption and resurrection,” said the Rev. Thea Keith-Lucas, the Episcopal chaplain for the ministry. “If we can focus on the things we share and offer that to the community, I think we’ll be a lot stronger than if we are insistent on making young Episcopalians or young Lutherans.” 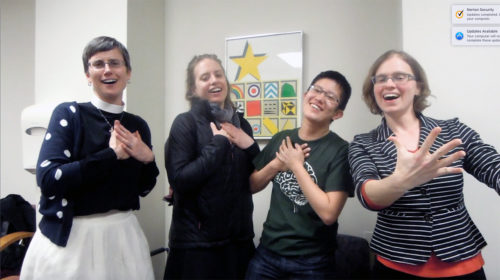 Having fun together: Chaplains Kari Jo Verhulst (far left) and Thea Keith-Lucas (far right) join students Jane Heyes and Ashley Morishige in a rendition of “Happy Birthday” for another student.

Indeed, especially among young people, denominational ties are far less important than for previous generations. While 23 percent of all Americans identify as “nones” or religiously unaffiliated, the number increases to one in three millennials (ages 18 to 29), with fewer and fewer people claiming a specific denominational membership.

Participants in the Lutheran Episcopal Ministry bear out this lack of denominational identity. While several students are either Lutheran or Episcopal, about half come from other religious backgrounds, said Keith-Lucas.

“They come here for an affirming stance and a progressive view,” she said. “The fact that we’re not being planted in one denomination or another frees us up to think about what we offer to this campus.”

Earlier this fall, the ministry sponsored a panel called “Coming Out Faithful,” with LGBT clergy discussing their personal experiences and ways to reconcile their faith with gender identity or sexual orientation. And, said Keith-Lucas, “I got to teach the term ‘hermeneutics’ to students of MIT – which doesn’t happen a lot.”

The partnership between the Lutherans and Episcopalians at MIT has a long history, predating the institutional churches’ Called to Common Mission by nearly three decades. A Lutheran and an Episcopal chaplain came together in 1972 to form the common ministry, with a focus on issues of social justice and reconciliation. The Episcopal and Lutheran components continue to have separate budgets and governance today, as well as chaplains from each tradition. But in most other ways, the two are merged.

For many years, the liturgy for the worship rotated between Episcopal and Lutheran. But in the past few years, “we discerned that it was really confusing,” said Verhulst. “We wanted to lower the threshold so people felt like they could enter into the worship experience.”

Verhulst and Keith-Lucas worked with students to craft a blended service that draws upon both traditions.

“Students, this generation especially, are looking for experience, for connection and for caring leaders,” Verhulst said. “They are looking for a place that is open and welcome to all.”

That doesn’t mean that the followers of the two denominations can’t learn from one another. The Episcopal Church’s understanding of prayer and how it shapes belief has been a rich area for the blended ministry to explore. And the Lutheran emphasis on confession has been an opportunity for growth for the Episcopalians in the group, said Keith-Lucas.

“Our discussions about liturgy keep me from going on autopilot,” she said. “I have to explain and articulate what’s important and what I love … . We look at what is grounded in our shared Christian roots and say, ‘This belongs in the service because it’s been tried and tested across denominations and across the centuries.’ ”

For Jane Heyes, a third-year doctoral student, the focus on community is the heartbeat of the ministry. Together, the students and chaplains explore “the theology of the imperfect,” Heyes said. On a campus like MIT, “everyone looks extremely successful, and you feel like you’re not. It’s really easy to fall into a trap of feeling down on yourself,” Heyes said.

The campus ministry offers “a space to be OK. We laugh a lot. We talk a lot … . We set aside a time every week for family dinner where we can let our hair down and not worry about everything.”

Plus, said Heyes, it’s a place to explore life’s meaning and your faith. As a scientist, a comparison that she heard long ago resonates with her.

“Practicing your faith in this world is like doing science,” said Heyes. “If you did science on your own, all by yourself, people would be very incredulous of your claims. … There is value in doing faith together as a group. You grow spiritually, and you have people with you on the journey, when you’re struggling and when you’re happy.”