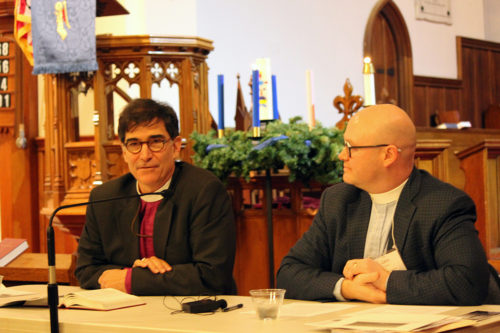 New Hampshire Bishop Robert Hirschfeld and the Rev. Calvin Sanborn of Maine share their perspectives on the theological basis for advocacy in the public sphere and what that might look like at the both the diocesan and parish level. Photo: Heidi Shott

[Episcopal News Service] Since the first days of his episcopate in 2008, Diocese of Maine Bishop Stephen Lane hasn’t shied away from raising a prophetic voice in the public square. As a church leader, he has spoken publicly in newspapers and at the state legislature in support of marriage equality, common sense gun laws, state budgets that ensure protections for vulnerable families, and against hate speech and intolerance.

In late 2014, however, questions like, “How do we engage Episcopalians in our congregations to get involved in advocacy?” and “How do we determine which issues to direct our focus?” led Diocesan Council to create a Public Policy Steering Group. Among the members invited to serve was John Hennessy, a parishioner at St. Luke’s Cathedral in Portland. Hennessy spent 20 years at the State House in Augusta as a lobbyist for progressive causes, and had recently returned to private consulting after five years as the policy director for Maine AARP.

During its first and only conference call, members of the steering group decided to create a statewide network modeled on the Church’s Episcopal Public Policy Network to teach Maine Episcopalians how to advocate with local, state and national policymakers about gospel issues of poverty, homelessness, hunger, and justice for the incarcerated, immigrants and all those at the margins.

Although a statewide public policy network resonated, volunteer members of the steering group and diocesan staff were already stretched too thin to make it happen. Then a chance call to the Rev. Chuck Wynder, the Episcopal Church’s officer for social justice and advocacy engagement, made all the difference. A grant program to support statewide public policy networks was included in the 2013-15 triennial budget. Since funds were still available, Wynder encouraged Hennessy to write a grant application. Suddenly, the creation of the Maine Episcopal Network for Justice seemed more like a reality.

By November 2015, with assurances of a one-year grant of $30,000 and an $8,000 commitment from the Diocese of Maine, it hired Hennessy as the network’s part-time director.

“Maine has developed an innovative approach for advocacy and engagement and demonstrated a collaborative spirit that can serve as a replicable model for dioceses in other states,” said Wynder. “As The Episcopal Church works to enhance our network of Episcopal statewide public policy networks, I look forward to drawing on their successes and lessons learned.”

“MENJ was created, in part, to address the growing interest of people across the diocese to actively and meaningfully engage in the public square. One of the many benefits of reaching out to people is helping them realize they are not alone,” said Hennessy. “Helping connect people who share a similar point of view on an issue has been very exciting. Conversely, hosting discussions with people who approach their position from differing places and can maintain civil discourse has been very rewarding too.”

Over the last year, Hennessy has visited more than a dozen Maine congregations, hosted an over-subscribed training session at St. Luke’s Cathedral, conducted workshops at diocesan training events, advocated with legislators in Augusta, and supported the work of two statewide referendums: one to raise the minimum wage for Maine workers, which passed in November; and one to close background-check loopholes in gun laws, which did not.

“We’re excited about several upcoming events in the coming year,” said Hennessy. “We will join with interfaith, ecumenical, and community partners to host a two-day Advocacy Days session in March. The first day we will offer training and the second participants will visit the State House to meet with their legislators. Because we have several congregations with groups of young people interested in social justice issues, we will do church-based training for them this winter so they will only miss one day of school.” A plan to take a group of young people to Washington, D.C. to meet with members of Maine’s congressional delegation is also in the works.

Hennessy made clear that Maine Episcopalians never envisioned doing this work alone. Because the dioceses of northern England share many common concerns, Lane tested the interest of the bishops of New Hampshire, Vermont, and the New England Lutheran Synod about becoming partners. The response was enthusiastic by both bishops and their staffs.

New Hampshire’s new Missioner for Community Engagement Laura Simoes signed on from the start, “Advocacy work, done by our parishes, has the power to change laws, change minds, and change us as individuals. The Episcopal Church of New Hampshire has energy and vitality. We are now growing our agency and gaining experience, to influence policy for the benefit of our communities. We welcome the chance to share in this work with our friends in Maine.”

On Dec. 3, Bishop Robert Hirschfeld of New Hampshire and the Rev. Calvin Sanborn, rector of St. George’s, York Harbor, Maine, gathered with about 50 other Episcopalians at St. Thomas’, Dover, New Hampshire, to discuss the theological basis for advocacy in the public square. “Advocacy: Speaking Our Faith” was the first training co-hosted by MENJ and the Diocese of New Hampshire. (Click here for videos from “Advocacy: Speaking Our Faith.”)

Hirschfeld recounted the passage in Matthew where Jesus feeds the multitudes: “Jesus says he has compassion for the crowds. The Greek word is splagchnizomai, the same word from which we get the word spleen. Jesus feels compassion in his guts. It is an incarnate word; it moves one physically. It’s not an intellectual exercise. Compassion is something we experience suddenly when we recognize we have gone to the deepest level of humanity with somebody who is in need, somebody who is not like us. It’s out of that abundant compassion that Jesus is impelled to act, that we are impelled to act.

“We believe this church is not just a town meeting with hymns…but that we are actually the Body of Christ, and that we are God’s hands and feet in the world.”

With the first joint training session concluded, Hennessy expressed confidence that the concept of faith-rooted organizing and advocacy will spread across the church. “Our first event in New Hampshire demonstrated we can use a shared approach to discussing the role of advocacy in the church which is rooted firmly in theological doctrines across a spectrum of issues. We look forward to including our friends in Vermont in the months ahead and will work with the Office of Social Justice on a conference for all Episcopalians in Province 1 to be held later this spring.”

Lane also expressed his confidence in the network as an exemplar to the wider church. “We believe this model offers the possibility of renewed participation by Episcopalians in the public square and enhances our relationships with other Christians as we seek to ‘seek and serve Christ in every person, loving our neighbors and ourselves’” he said.

“It’s work not only to change the world, but work that can change us, breaking open our hearts and inviting us into the compassion of Jesus.”

– Heidi Shott is canon for communication and advocacy for the Episcopal Diocese of Maine.