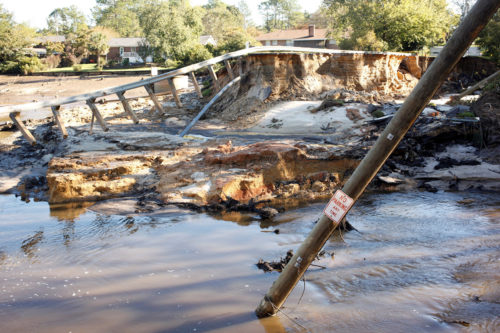 A utility pole with a no-parking sign sits in a Fayetteville, North Carolina, creek after a lake burst its dam because of a deluge from Hurricane Matthew Oct.10. Photo: REUTERS/Jonathan Drake

Some still cannot return to their homes because of severe damage in their communities or because rain-swollen rivers and creeks are still flooding.

The storm killed more than 1,000 people in Haiti by the estimate of the Reuters news service. Officials there have begun burying people in mass graves.

At least 21 have died in the U.S. – nearly half of them in North Carolina, according to the Associated Press. Most were swept away by flood waters and officials worry that the U.S. death toll may rise as impatient people drive around road barricades into swiftly moving floodwaters. Water from the torrential rains that hit eastern North Carolina over the weekend continue to swell rivers and levees and dams are threatened. Some people missing since the storm have been found but others are still missing, the news service said

Episcopal Relief & Development said Oct. 10 that it continues to provide technical assistance to local partners in the areas affected by Hurricane Matthew, as the storm dissipates over the Atlantic Ocean. In the places most severely impacted, information gathering is hampered by downed communications lines, widespread power outages and damage to critical roads and bridges, the organization said.”

“From what we are seeing so far, the damage is extensive in a number of areas and it will take a long time, even years, for many of these places to recover,” said Abagail Nelson, senior vice president for programs.

Members of the Diocese of North Carolina on Oct. 10 were still trying to assess damage there, but “as of this afternoon, we don’t have reports of major damage sustained by churches within our diocese,” Director of Communications Christine McTaggart told Episcopal News Service via email. Diocesan officials had not yet heard about major damage to any church.

“We’ll continue to stay in touch with churches in the areas hardest hit until rivers have finished rising and the danger of additional flooding has passed,” she wrote.

The Fayetteville Observer reported that St. John’s parking lot was submerged Oct. 9, as well as the children’s playground and bottom floor of the church. The choir room, preschool chapel and an administrative office on the bottom floor were among the areas that sustained serious damage, according to member Mary Holmes, who said the church had recently undergone a major restoration in anticipation of its 200th anniversary next year.

More than 45 people came to help clean the church out early on Oct. 9, Holmes told the paper. By afternoon, rugs and children’s toys littered the parking lot as volunteers worked to save what they could.

Diocesan House in Kinston, North Carolina, was without telephone and internet service. Water entered offices there; it was “fortunately not deep, but enough to wet the carpet thoroughly,” Browne said via email.

“Bridges are closing as I write this email, as the rivers are swelling,” Browne reported. “At this hour, we are unaware of catastrophic loss of parish property in our diocese.”

Later in the day, Browne emailed to say that East Carolina was experiencing horrible flooding and evacuation.  “The damage to the state’s road infrastructure is astounding with a great many roads washed out in one or more places,” he wrote.

Member of the Episcopal Church in South Carolina were also regrouping on Oct. 10 and trying to find out how congregations in the Lowcountry along the coast fared, Holly Behre, director of communications, reported via email.

Members of four of those coastal congregations had organized Eucharist together the day before near Hendersonville, North Carolina. Most of those attendees were from All Saints Episcopal Church on Hilton Head Island, which was very hard hit. They are still not able to return home, Behre said.

The Rev. Richard Carroll Lindsey, All Saints’ rector, wrote on the church’s website that an eyewitness reported that the church weathered the storm with only a street light down, a small tree across the entrance and the cross on the steeple damaged. 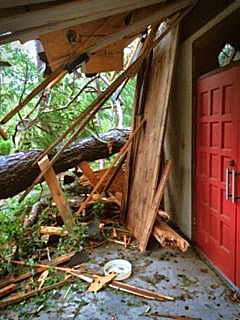 Trees knocked down in Hurricane Matthew lie outside of the doors of St. Francis of the Islands Episcopal Church in Savannah, Georgia. Photo: Diocese of Georgia via Facebook

In the Diocese of Georgia, six of 24 coastal churches held services on Oct. 9. As evacuees were returning home Oct. 10, Bishop Scott Benhase said that damage on the coast was “less than was feared or forecasted.”

However, Benhase said, “we know that others in the southeastern United States, and particularly our sisters and brothers in Haiti, the Dominican Republic and the Bahamas, did not fare so well. Our hearts and prayers go out to them.”

He urged people to donate to Episcopal Relief & Development.

Twenty-two coastal churches and the retreat center suffered minor damage or even no damage from the storm, Benhase said. St. Francis of the Islands Episcopal Church, Savannah, lost a significant number of trees, which in turn damaged the church porch, education building and playground. No survey of All Saints Episcopal Church on Tybee Island has yet been possible, although some areas near the church experienced flooding and wind damage, the bishop said.

“In the days ahead there will be insurance claims to file and lots to repair and to clean up. We will do that and move on,” Benhase predicted. “God has called us together so that we might be the hands and heart of Jesus for others.” 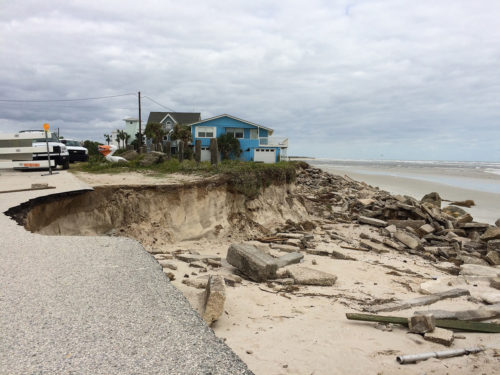 Diocese of Southeast Florida Bishop Peter Eaton voiced similar concern for those in the Caribbean after Matthew. “While we in our diocese were not hit by the full force of this storm, others have been terribly hit, and I hope that we can give from our strength and sense of gratitude,” he wrote Oct. 8.

In Jacksonville, Florida, St. John’s Cathedral opened its doors during the storm and became a sanctuary for some people, the Very Rev. Kate Moorehead said.

The dean predicted in her Oct. 9 sermon that the congregation would not soon forget the hurricane or the anxety of wondering if they would see each other again. She recounted riding out the storm with her husband and sons in one part of their home away from the side shaded by a large water oak tree. They worried that the tree would fall on the house but, instead, it fell into the front yard. “We just have one hole in the roof – a small one,” she said.

However, the downed tree trapped the family in the house for two days until they could cut through some limbs with a chainsaw and get her car out of the driveway. Freed, Moorehead and one of her sons drove down the street and almost got hit by an oncoming car in an intersection.

“Aren’t you grateful after this storm to be alive?” she asked.

Such gratitude, she said, is about “opening our eyes to the truth that God has given us life and, no matter what happens, all we can say is ‘thank you.’ ” 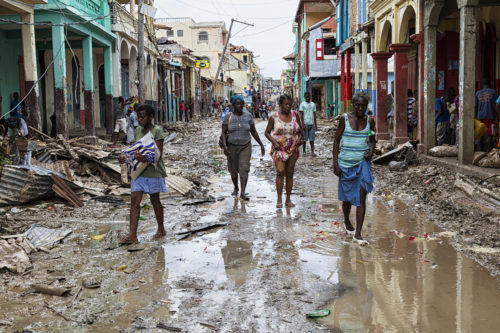 People walk along a street in downtown Jeremie, Haiti, Oct. 6, two days after Hurricane Matthew made landfall nearby. While the capital Port-au-Prince was mostly spared from the full strength of the class 4 hurricane, the western cities of Les Cayes and Jeremie received Matthew’s full force. Photo: Logan Abassi UN/MINUSTAH

Meanwhile, nearly a week after Hurricane Matthew began its destructive journey, the United Nations Office for the Coordination of Humanitarian Affairs said Oct. 10 that nearly $120 million in aid was needed to help the devastated portions of Haiti.

Local aid officials struggled to get food, medicine and water to increasingly desperate communities still isolated almost a week after the blow from Hurricane Matthew, the Associated Press reported. Officials said that young men – some of them armed – in villages along the road between the hard-hit cities of Les Cayes and Jeremie were putting up blockades of rocks and broken branches to halt convoys of vehicles bringing relief supplies.

Episcopal Relief & Development it will support local partners such as the Bishop Tharp Institute (BTI) in Les Cayes to provide food and water to displaced people sheltering on the school’s campus.

“Papa, J’ai peur, je veux du soleil (Daddy, I am scared, I want to see the sun),” Ernest Cajuste’s 4-year-old son told him as the hurricane bore down on their Haitian home

Cajuste, an Episcopal Relief & Development program officer, wrote that “the strong winds made it sound like our house might disappear into the air,” about riding out the hurricane in Haiti. “We could hear a high, shrill, piercing clatter when our window frames vibrated. This is the first hurricane he has lived through. That was certainly a scary moment for him, but after the long, dark night of tension, we were fine. We were lucky.”