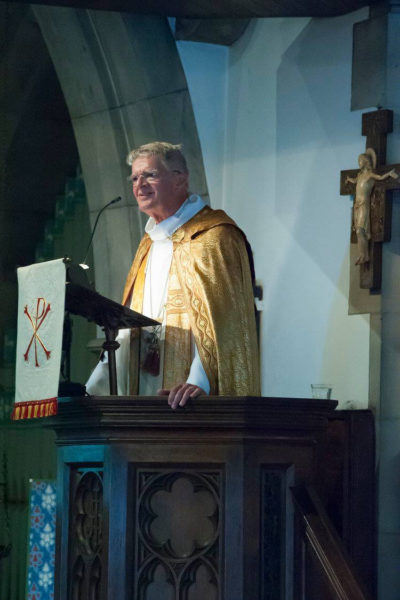 [Episcopal Diocese of Rhode Island press release] More than 200 people turned out on one of the hottest days of the summer to celebrate a remarkable three-year turnaround at St. John the Evangelist Episcopal Church in Newport. The Aug. 14 event marked the installation of the Rev. Nathan J.A. Humphrey as rector. Humphrey came to St. John’s in August 2013 as vicar at a time when the church was a mission of the Episcopal Diocese of Rhode Island.

During a time when megachurches with big screens and stages are attracting plenty of attention, this mainline church in a historic neighborhood has tripled in size. It is attracting people back to church with very traditional worship and theology as well as innovative programming.

The special service, which also celebrated the Eve of the Feast of St. Mary the Virgin, featured the Rt. Rev. Frank T. Griswold III, former presiding bishop of the Episcopal Church, as preacher. The Rt. Rev. W. Nicholas Knisely, bishop of the Diocese of Rhode Island, presided. A barbecue on the lawn followed the service.

In his sermon, Griswold recounted how he and Humphrey met while on retreat at a Roman Catholic Benedictine monastery; Humphrey was 19 and Griswold was Bishop of Chicago. Nathan had been raised a fundamentalist and never exposed to the Benedictine tradition, which resonated deeply with him. Griswold’s sermon focused on the first word of the Rule of St. Benedict — “Listen” — and drew a parallel between the abbot’s duty to listen to the monks, particularly the youngest, with a rector’s duty to listen to all. Given the timing of the eve of St. Mary the Virgin, Griswold characterized Mary as one who primarily listens for and to God’s Word, and as Luke says, “ponders all these things in her heart.” All Christians are called to listen to each other and to listen for and to God’s Word, and ponder what God is calling us to do in the world.

The Mass setting was Mozart’s “Coronation” Mass with organ and strings, featuring the adult choir of St. John’s and the Professional Choristers of the Choir School of Newport County. Humphrey founded the school in 2014, and he cited it as one of two key factors in the turnaround at St. John’s. He launched the music focus by calling Peter Stoltzfus Berton as executive director of the school and organist and choirmaster of the church. The school is a year-round after-school and summer program for boys and girls ages 7 and up; choristers are paid a small stipend for each rehearsal they attend and service they sing. Choristers sing on average twice a month for services at St. John’s, so that if they are involved in another church, their families are able to maintain their connection to their home congregation.

“It was a wonderful celebration in honor of Our Lady and marking the beginning of my tenure as rector,” Humphrey said. “My only regret was that it was so hot this weekend, many people who said they planned on attending were prevented in the end from being with us. We would have had an even bigger party if the weather had cooperated. But we’ll find another excuse for getting together again soon. Mozart and BBQ are two great tastes that taste great together.” 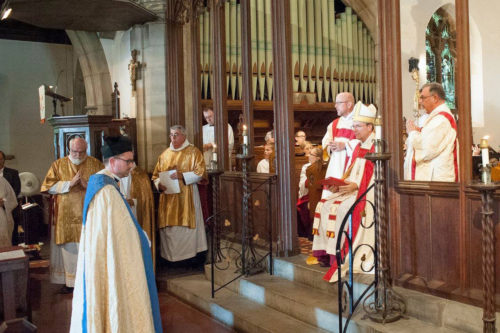 When Humphrey arrived, average Sunday attendance hovered at about 25; now it’s more than tripled and continues to grow. The church’s annual budget was $137,000, far below what was needed to call a full-time priest. This year, the parish approved a budget of $397,000. The church has daily services of Morning Prayer and Evening Prayer Monday through Friday and two worship services (8 and 10 a.m.) on Sundays.

A second new initiative, a renewed focus on mission, has combined with the music program to make the difference.

“We have focused more on outreach and mission through the leadership of the Rev. Buck Close, a deacon who is serving our parish,” Humphrey explained. “Our music and mission work have attracted new members who are excited and energized by the sort of ministry and fellowship we have here, and they have shown that in their generosity. The efforts also have re-energized existing members, who have seen something new and worth supporting.”

Mission programs led by Close include a lunch distribution program at Newport’s Battery Park. The lunches are intended for children who qualify for school lunches during the academic year but who might otherwise go without during the summer. He also heads the church’s Samaritans ministry, which reaches out to people in need in the community, offering rides to church and doctor’s appointments, meals during times of illness or bereavement, and other needs. The church also collects food for the Martin Luther King, Jr. Community Center.

St. John’s also reached out to the Diocese of Rhode Island and received a three-year phased grant to help cover initial funding of Humphrey’s position. That grant, offered through a program that supports inventive, creative plans that seek to transform the life of a congregation, phases out this year. Thanks to the growth that’s occurred in the past three years, St. John’s now fully funds that and other key staff positions.

St. John’s is one of two Anglo-Catholic parishes (“A distinct identity with worship that centers on the beauty of holiness,” Humphrey said.) in the Diocese of Rhode Island, along with St. Stephen’s in Providence. Throughout the revitalization, St. Stephen’s has supported St. John’s, serving as a sister parish. The two churches celebrate joint liturgies periodically throughout the year.