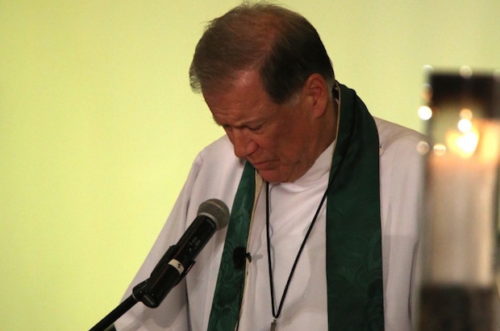 [Anglican Journal] Archbishop Fred Hiltz, primate of the Anglican Church of Canada, says he understands why some bishops have chosen to go ahead with the solemnization of same-sex marriages, even though the marriage canon (church law) cannot be officially changed until it is voted on again at General Synod 2019.

He also stressed that he has no jurisdiction over diocesan bishops to stop them from doing what they want on the issue.

“As primate, I have no authority to say to a bishop, ‘You can’t do that and you must not do that,’ ” he said.

In an interview with the Anglican Journal July 14, Hiltz said that due to the pastoral contexts in which these bishops find themselves, they are “under huge pressure from their parishes and their clergy to proceed” with same-sex marriage.

“There is a part of me, I think, that would say, given their pastoral context, I understand where they are coming from,” he said. “I can see the pressure they feel.”

When a recount the following day, July 12, showed that the motion had indeed passed its first reading, and would therefore go on to a second reading at General Synod in 2019, where it would be voted on again, these bishops stood by their earlier statements to move ahead with same-sex marriages in their dioceses.

They faced immediate backlash from more conservative bishops, seven of whom have issued a joint statement saying they “publicly dissent” from the outcome of the same-sex marriage vote and that going ahead with same-sex marriage now is “contrary to the explicit doctrine and discipline set out in our constitution, canons and liturgies.”

In an interview with the Journal on Tuesday, Bishop William Anderson, of the Diocese of Caledonia, said that having bishops go ahead with same-sex marriage would cause a “period of chaos” for the Canadian church.

Hiltz, however, said he is confident that there are other bishops who will be committed to making sure the church understands that the question isn’t settled until it has been voted on again in 2019.

He did acknowledge, however, that tensions between those seeking to go ahead and those unhappy with the proposed change to the marriage canon will be a topic of serious conversation at the House of Bishops meeting in September.

“We will need to find a way to have that conversation in as respectful a way as we can. It in itself will be extremely divisive in the House of Bishops,” he said.

Aside from noting that a block of time will be set aside for a General Synod debrief, however, he wasn’t able to provide much information about how that conversation will be structured.

Although some have been critical of the church for expending so much energy on the question of marriage, given that church marriages are in general decline in Canada, Hiltz said that giving LGBTQ couples access to church weddings is about equality.

“The issue, from my point of view, is no longer acceptance; it is no longer inclusion — I would hope that our church has got past that,” he said. “The issue now is marriage and the longing for gays and lesbians in monogamous, lifelong relationships of faithful, covenant love. They want equality.”

The synod was also marked with a high level of frustration over the strictures of the parliamentary procedure, and in particular the way in which it leads to divisive and polarizing approaches to complex issues.

“I was hearing really clearly from members…can we find other ways of making substantive decisions that don’t, as some would say, leave people…pitted against one another?” he said.

Following the July 11 debate and vote on the marriage canon, synod members were asked on the morning of July 12 to reflect in writing on how they think the church might better approach questions of structure and governance.

Hiltz said these comments would be compiled into a digest for study by the House of Bishops and Council of General Synod (CoGS), and that he hopes this would open up possibilities for a less adversarial way of decision-making.

“I think there is an openness [to change], and I think, in fact, I would go so far as saying that it cracked open, in this synod—it cracked open and people talked about it,” he said, adding that this might be an area where the Anglican church can learn much from its Indigenous members.

“Certainly one of the things I’ve said is that from Indigenous people we’ve learned that the circle-type conversations…work,” he said. “What can we continue to learn out of that, in terms of having an experience of synod even in the midst of a conversation that is very difficult, of people not…feeling pitted against one another?”

While the decision to move toward allowing same-sex marriage in the Canadian church will doubtless have repercussions across the 77-million-strong global Anglican Communion, Hiltz said he has yet to receive a response from either the Anglican Communion Office or Archbishop of Canterbury Justin Welby. He noted that the Church of England has only just wrapped up a meeting of its own General Synod.

He said he would send Welby a letter explaining what happened at synod and including the resolution on the marriage canon that passed its first reading.

“That is in keeping with the openness and transparency for which our church is known — and this office is known — in the Communion,” he added.

As the church recovers from a General Synod marked by pain, division and confusion around the vote to allow the solemnization of same-sex marriages, Hiltz says Canadian Anglicans must focus on “restoring relationships.”

Hiltz said that the way events unfolded has caused everyone to come away feeling some measure of hurt.

“I don’t think you could say of this synod that anybody won the day,” he said. “Everybody, in a sense, felt everybody else’s pain, no matter what side of the issue you are on or how you hoped the vote would go.”