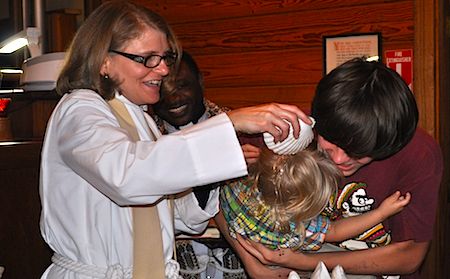 The Rev. Betsy Randall baptizes a baby during a mission trip to All Saints Episcopal Church in rural Atlanta, Texas. Photo: Episcopal Diocese of Dallas

[Episcopal Diocese of Dallas] The Rev. Betsy Randall doesn’t invite the un-churched to worship or to hear her preach the Gospel. Instead, she asks those who don’t know Christ to pick up a hammer, paintbrush or garden hoe and serve. It just happens that during the life-changing days focused on nails, paint and dirt that the Holy Spirit escorts them to a seat in the pew and their Christian journey begins.

Randall, who is an assistant rector at Church of the Epiphany in Richardson, Texas, goes on these service trips with a crew of lay leaders who bring the love and build the foundation for Christian community. But they don’t stop there. Her God-squad of faithful followers prefers to double-dip their efforts as they help transform lives.

For instance, they take the un-churched volunteers on a mission trip to All Saints, a financially struggling Episcopal church in Atlanta, Texas, to spruce up the parish, and wrap their arms around the congregation in emotional support and friendship. “It’s a reciprocal relationship that allows conversion,” Randall said. “We like to move in and plant the seeds.”

Paul G. Mathew, a parishioner at Epiphany, has gone on three mission trips to All Saints where he says he watched with awe as a depressed congregation was gloriously uplifted and atheists fell to their knees and prayed.

Missioners from Church of the Epiphany in Richardson, Texas spruce up a house at Shepherd’s Pasture in rural east Texas. Photo: Episcopal Diocese of Dallas

On the first trip, All Saints congregants talked about how they rarely had the money to hire a priest to provide Holy Eucharist on Sundays and how they felt no one cared whether they kept the church doors open. When the Epiphany posse showed up and worshiped with them it was a joyous occasion for everyone and was the catalyst to redirect the momentum of the church toward renewal.

“They were moved because they knew people cared about them and that they were not forgotten,” Mathew said. “After the Mass, everyone cried and it was very emotional. This congregation had been going through hard times financially but they realized there was hope and it was really moving.”

Jim Bob McFerrin, who is a lay leader at All Saints, said the partnership with Epiphany has helped them turn the corner in church membership and stewardship. The church is now able to hire a supply priest twice a month for Holy Eucharist. “When Epiphany came out they helped us fix some things we couldn’t get done,” McFerrin said. “We thought we were just getting the building ready for sale. But by the time they left we were so energized we decided that until the bishop told us to close, we were going to hang in there.”

Randall said partnerships between big churches and small develop best if it starts with prayer. She recalled sitting in a diocesan council meeting when the treasurer reviewed the financial struggles of All Saints. Randall began meeting with church leaders and praying with them for about a year before she brought the mission team to Atlanta. The prayers, she noted, should be on behalf of both congregations.

“You have to be intentional about the partnership,” Randall said. “You have to remove the understanding of the big parish is coming in to help the small. It takes two for the relationship to work and for transformation to happen.”

Freda Hass, who is an organist at All Saints, says the outreach was a highly visible display of the Lord moving and working in the lives of the volunteers and the congregants. As a result, the congregation has begun to grow and she credits Epiphany’s outreach. “It has taken the focus of us just trying to stay alive, to us going out and doing the work of the Lord in our community and fulfilling our mission. When you go outside of yourself, you gain new perspective and a new set of eyes to view the world.”

That work includes joining Epiphany to help the nearby Shepherd’s Pasture in Jefferson, Texas, a retreat and conference center that ministers to veterans and their families. “We love this group,” said Romey Kilgore, who owns the center with her husband, Dwayne. “They are like family. We stay connected between service projects and pray for one another.”

Longtime Epiphany parishioner Laura Hartronft, who is a leader in Cursillo and prison ministry, said fixing up the church was a nice gesture to All Saints but the real support came in the relationships that were formed. “It’s giving our presence to others so they don’t feel so abandoned,” she said. “Plus, it’s just a wonderful experience. Going home you feel guilty, that you got more out of it than you gave.”

The transformation also enveloped the un-churched University of Texas at Dallas students who came to sweep floors and make minor repairs and give their time to serve others. It was during the first trip to Atlanta that two students from Taiwan, who had no exposure to church, came to volunteer, not worship.

Mathew said it was a blessing to watch the transformation of his friends. “They were moved to realize what it means to be Christian, and to witness the love we have with God,” Mathew said. “I saw them pray for the first time. It was amazing to watch.”

After this mission trip, the UTD students began attending Epiphany’s Saturday night worship service, which has grown to about 40 students from countries all over the world. The mission trip“really solidified our Saturday service,” said Randall, whose philosophy is to invite Millennials to serve before inviting them to church. The young adult generation likes to help others, so it’s a natural way to engage them, she said.

McFerrin said he would like to see more partnerships between churches happen in the diocese. “It helps the congregation see and hear about the ministries of the other lay people, and it helps them see that you don’t need a collar to do something.”

Dallas Bishop George Sumner encourages such partnerships between small and large churches and said that both entities benefit. “The word “koinonia” in New Testament Greek included the Eucharist, fellowship, and shared inheritance. In other words, how we pray, and how we collaborate, are deeply connected. The friendship in the gospel between Epiphany and All Saints is a vivid example of koinonia in the fuller sense.”