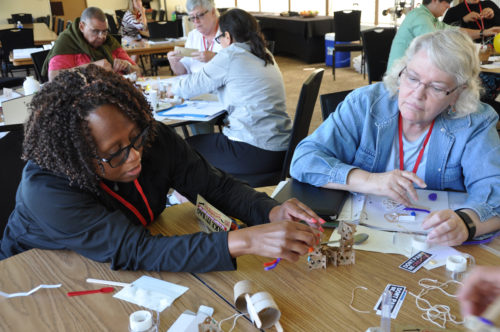 Myra B. Garnes, Diocese of Long Island canon for youth and young adult ministries, left, and the Rev. Diane Higgins-Shaffer, a deacon in the Diocese of Oregon, work on a team-building exercise during a Called to Transformation Asset-Based Community Development facilitator formation workshop June 13-16. Photo: Mary Frances Schjonberg/Episcopal News Service

[Episcopal News Service – Federal Way, Washington] A new tool being used by a growing number of Episcopal Church congregations invites Episcopalians to shift their approach to mission work: Don’t rush in to assess needs in order to devise programs to meet those needs; instead listen, build relationships, find each other’s gifts and discern how to use those gifts to build up the community together.

“ABCD is an approach that asks us to look at and approach the world differently,” the Rev. Canon E. Mark Stevenson told a recent Called to Transformation Asset-Based Community Development workshop in the Seattle area.

“It’s not our job to get from scarcity to abundance; that’s God’s job. God’s given us what we need in every circumstance, in every place,” said Stevenson, director of Episcopal Migration Ministries. “God has given us enough and if we offer that gift to God, God makes it into abundance.”

This is not naiveté or a Pollyannaish attitude about the problems facing people and communities, he said: ABCD is “not simply about feeding the hungry or housing the homeless; it’s developing the capacity of the community to provide the environment for opportunity for all.”

The work is about cultivating a space where everyone knows that they are loved and respected because they are children of God and have “the ability not to be served but to give away their gifts in service” to their communities, he said. ABCD turns away from the quick fix towards long-term transformation.

Stevenson said ABCD work is more like pilgrimage than it is tourism – that is, those who would “do outreach” with a community need to arrive as pilgrims willing to be vulnerable and willing to be taught by the members of the community to which they have come.

It is easy to get pulled into the belief that only certain people with their access to specific assets such as money can do something about the world’s problems, Sean McConnell, senior director for engagement at Episcopal Relief & Development, which co-sponsors the workshops with the Episcopal Church, told the Seattle workshop participants.

McConnell said that Episcopal Relief & Development staffers view communities they work with around the world as being filled with people who are hopeful that their communities can be better despite some obvious deficits. “The key to it is hope,” he said. 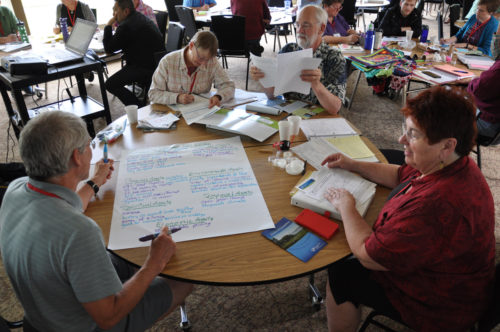 One initial step in the ABCD process involves mapping the assets of a community and the people in it – ranging from people to land, buildings to faith, money to relationships and political influence to passions – rather than tracking their needs and deficits, he said.

Mapping only the needs of a community, McConnell warned, results in categorical funding that forces people to compete for money in a way that gets in the way of building relationships and instead fosters cycles of dependency and hopelessness. An asset map provides a path towards creatively envisioning how to use abundance to achieve goals and imagine new forms of ministry.

One example of ABCD in action that workshop participants learn from is the 32nd Avenue Jubilee Center in northwest Denver, Colorado. The center grew out of the mission and ministry of Our Merciful Savior Episcopal Church and in 2013 found itself serving fewer people while struggling with finances. Lelanda Lee, vice chair of the center’s board and a former member of the Episcopal Church Executive Council who had helped other parts of the church use ABCD, suggested using its methods to engage people in the neighborhood to envision the center’s future.

The initial process took a year and, as Lee told the Seattle workshop participants via a video, showed the participants that the work of ABCD is an ongoing process of ongoing community engagement, conversation, reflection, and reengagement.

The very act of asking questions about people’s hopes for their community and the gifts that they could bring to realizing those dreams began to change both the people and the community, participants said. The center learned that it was an acknowledged neutral party and leader in the community that could continue to be a convener of conversations to foster relationships between the many voices in the neighborhood.

Details of the 32nd Avenue Jubilee Center’s ABCD pilot project and its insights are here. 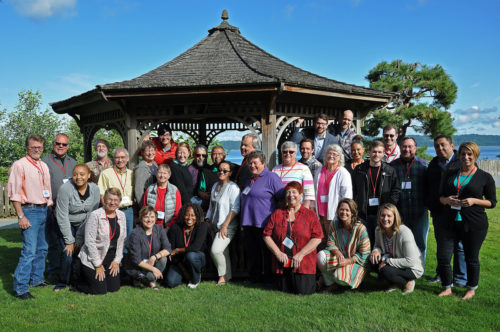 For Tidwell, one of seven Diocese of Atlanta members who attended an earlier Called to Transformation workshop in Denver, ABCD begins with turning around people’s assumptions about the efficacy and direction of their mission work. The implied question it asks about the ministry they may be engaged in, she said, is: “It’s working for you but is it working for those people you are trying to work with?”

Tidwell, one of the diocese’s two archdeacons, has learned that people in perceived need hope for relationships with other people who will stay in contact with them rather than simply to be the recipients of charity work from people who eventually leave. ABCD also opens up the opportunity for people to give back to their communities rather than depending solely on help from the outside.

That approach, both Tidwell and Ruffin said, challenges many an outreach committee.

“You really have to sell this idea to parishes,” Tidwell said, because they’ve been working under the paradigm that members go to a community, tell the residents what they need and give it to them. “It’s important for people to understand that this is not a new Band-Aid,” she said. 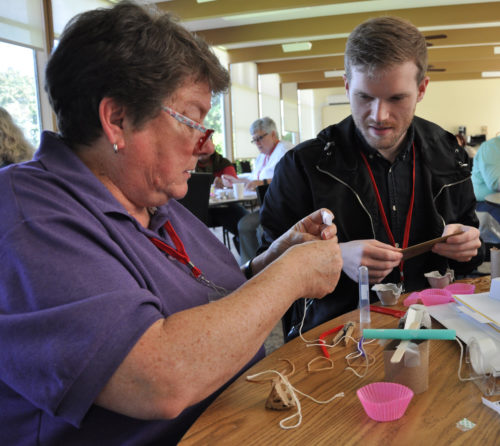 And, someone going to an ABCD workshop will not come home with a well-developed/sequential plan to do parish and community outreach, she warned. What they will bring home are some ideas about how to start getting to know a community and building the sort of trust that allows that community to bring its gifts to bear.

Ruffin, who will soon celebrate his first year as a priest and is associate for mission and outreach at St. Michael and All Angels Episcopal Church in Dallas, Texas, agreed that turning to ABCD work means turning away from many attitudes and assumptions about outreach. It is especially true, he said, in a parish such as St. Michael and All Angels, which has the resources to “just decide to do something and do it almost overnight.”

After attending a Called to Transformation workshop in St. Louis, Ruffin began working with the parish’s mission and outreach leadership team, which is charged with helping discern where God is calling St. Michael’s to be in the wider community.

“What we’re having to do is dig people out of their own trenches,” he said, because as in nearly every parish, “people are really tied to their outreach.” The work is not to criticize their efforts but to help them disconnect enough from them to ask questions about their effectiveness, Ruffin said.

Working outwardly from that group to vestry and with the whole parish, Ruffin is helping lead a process of gifts and asset mapping. Eventually he hopes that Pentecost will be the focus of the budding idea that “money is not the only currency that we have to exchange,” and instead the valuable currency is gifts of many kinds offered in the service with others.

His advice to other would-be ABCD practitioners? Don’t come looking for the next new thing in ministry; instead, come looking for ways to “genuinely empower your parish to recognize its giftedness within the larger community” and be prepared to go slowly and get push-back.

Also, Ruffin said, be prepared for the “countercultural voice to say ‘slow down, pray, listen, repeat’.”

Shape of the workshops
Called to Transformation is a partnership between the Episcopal Church and Episcopal Relief & Development. The workshops are designed to train leaders in methods and tools to enhance local ministry and mission to work not only in their own communities but to be facilitators for other communities that would benefit from the approach. 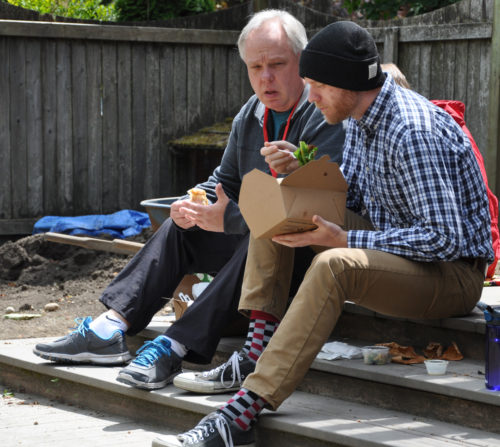 Participants generally gather the first evening for an opening Eucharist and other introductory work. The workshop’s first full day is, in Stevenson’s words, a big ABCD information dump, coupled with individual and group exercises to begin working with the methodology’s concepts, especially the idea of mapping a community’s assets. Participants spend most of the second full day traveling around the local community to visit organizations – both secular and faith-based – that have used ABCD to shape their work. The workshop concludes with a half-day session centered on beginning to design a plan to implement an Asset-Based Community Development project back home.

Two more ABCD Called to Transformation workshops are scheduled for 2016. Registration is open for an Aug. 8-11 session at Nashotah House in Milwaukee, Wisconsin. The final session is set for Sept. 19-22 t the Bosque Center, Diocese of Rio Grande, Albuquerque, New Mexico. Registration is open here.

Read more about it
The Called to Transformation website has a number of resources here.

The website’s online toolkit and facilitator formation process were developed by the Episcopal Church and Episcopal Relief & Development with assistance from the Beecken Center of the School of Theology at the University of the South.

Episcopal Relief & Development has an explanation of how it uses ABCD methods, along with some stories illustrating its use, here.

A previous version of this story incorrectly placed St. Michael and All Angels Episcopal Church in Houston, Texas. It is located in Dallas, Texas.