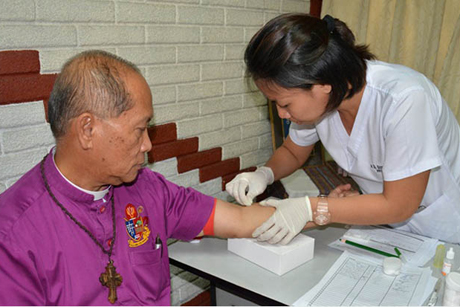 The Most Rev. Ephraim S Fajutagana, Supreme Bishop of the Philippine Independent Church, undergoes an HIV test as part of the National Council of Churches in the Philippines public campaign to remove the stigma associated with HIV/AIDS.
Photo: NCCP

[Anglican Communion News Service] Christian leaders in the Philippines have undergone public HIV tests as part of a campaign against the stigmatization of people with HIV/AIDS.

The Rev. Rex Reyes Jr, general secretary of the National Council of Churches in the Philippines (NCCP), told a press conference at the World Council of Churches’ Central Council meeting in Trondheim, Norway, June 27 that it was part of an “aggressive educational awareness program.”

Reyes, a priest of the Episcopal Church in the Philippines, said that the “strong religious flavour” in the country was a defining issue in the way some people behave towards people living with HIV; and that the public HIV tests was part of a “more practical way” of dealing with the stigma.

Church leaders were undergoing HIV tests not because they thought they might have the virus; but “to project the necessity of HIV testing for our young people.”

He said: “Our young people are afraid to go for testing because of the discrimination that comes with it, because of the religious taboo that has been hammered home for a long time, the concept of sin and the notion of immorality, and so on.”

In addition to promoting HIV testing, the campaign was also designed to challenge young people on the issue of not discrimination and human dignity, Reyes said.

The stigma associated with HIV/AIDS led to a large public backlash when a photograph of Reyes undergoing an HIV test was displayed on a huge billboard on the main highway in the country. “I was bashed for that and there was strong reaction from my colleagues to issue a statement,” he said. “But we [decided to] let it pass, because at least people are talking about it.”

He said that churches in the Philippines were working together on their approach to HIV/Aids. “It is stronger that way,” he said. “The theological issues are easier to deal with when we talk together.

“We recognize churches when they have their own initiative – and that is good. But to drive the point that HIV transcends denominations [and] transcends faith. We have to deal with that in an ecumenical way and I’m very glad that the WCC is leading in this area.”

Isabel Apawo Phiri, the associate general secretary of the WCC, said that a statement on HIV/AIDS was being prepared at the on-going meeting of its Central Committee. The statement, which will follow similar statements in 1986, 1996, and 2006, will ask churches to “recommit themselves to the work on HIV,” she said. “What this does is to show that we are united in the area of our HIV/AIDS response. This is not for an individual church to act on its own but for all of us together.”