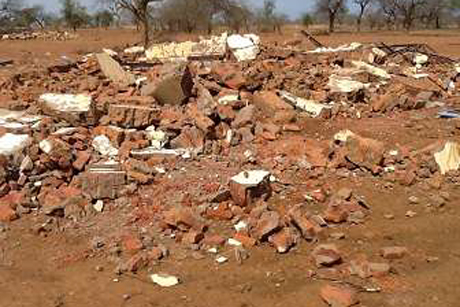 [Anglican Communion News Service] The only secondary school Umdorain County, in Sudan’s South Kordofan state, has been destroyed in ongoing fighting between government forces and the opposition Sudan People’s Liberation Army in the Nuba Mountains. Grace Secondary School, built by the Diocese of Kadugli in 2008, is one of a number of casualties of the ongoing conflict.

The state was due to hold “popular consultations” on its future following the peace deal which saw the creation of an independent South Sudan in January 2011. But the state’s governor Ahmed Haroun (who, along with the Sudanese President Omar al-Bashir, is wanted by the International Criminal Court on charges of war crimes against civilians and crimes against humanity, cancelled the consultations, leading to ongoing violence.

Bishop Andudu Adam Elnail of Kadugli, in the Episcopal Church of South Sudan and Sudan, is asking Anglicans to pray for the people of the Nuba Mountains as they face ongoing violence with the continuing warfare between the two sides.

“In grief, I am writing to bring to your attention the tragedy that our people in the Nuba Mountains are experiencing since mid-March up to the present,” he said in a letter published in the diocesan newsletter Tabaldi.

“People in the Nuba Mountains are experiencing brutal ground attacks and aerial bombardment on a daily basis from the Sudan Armed Forces . . . who have been fighting the Sudan People’s Liberation Army . . . since the year 2011; causing a loss of many lives and destruction of property.

“The situation of the people has become more difficult with the recent intensification of aggression on the civilian population that started since mid-March 2016 to this month of April. This scale of the war has spread all over the Nuba Mountains and the Blue Nile Regions. . . As a result, our Diocese of Kadugli is divided into two parts: some of its churches fall in the area controlled by the Government of Sudan, and others in the SPLA controlled areas.”

Three thousand government troops were sent to the Karakaria area and the surrounding villages, including Ekwartang, the village where Andudu was born and raised. “They killed and drove people away [and] occupied the villages for six days before the Sudan Liberation troops defeated them and drove them out of the villages,” he said. “But the Sudan Armed Forces left nothing in the villages.”

The bishop said that more than 22 civilians were killed during the attacks around Karakaria; many people are still missing. The troops burnt almost all the houses and two churches in the area. Another one was shot at from the inside, and all the iron sheets on the roof were destroyed.

The troops destroyed Grace Secondary School with bulldozers. Sorghum crops, sesame, and ground nuts harvested over the last year were burnt. Civilians are currently left in open spaces, rivers, valleys and in caves on the mountains; and facing challenges to cope with the situation. Their plight is expected to deteriorate as the rainy season is expected to begin soon.

“At the moment there is no humanitarian assistance by international NGOs or the UN agencies to assist the people in need [because] the government of Sudan . . . expelled and banned all humanitarian agencies,” the bishop said.

Andudu, who says he is receiving bad news almost every day, is calling for prayers for the people in the Nuba Mountains and other places experiencing war.

“Pray for peace, that God stops the bloodshed of innocent people. I still believe in prayers and good negotiation strategies, peace will prevail,” he said. The bishop also asked for prayers for financial support so that they can buy food for “the people who lost everything and are already experiencing hunger, especially families with children and elderly people.”