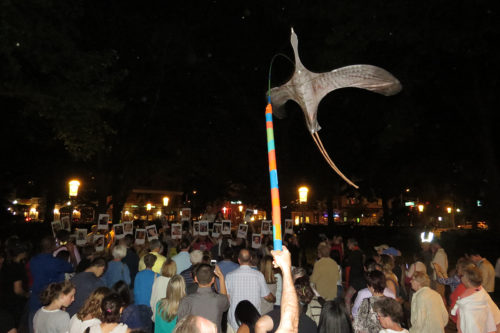 A dove of peace sails above a crowd of 500 who gathered on the green in Morristown, New Jersey, in a June 15 candlelight vigil for the victims of a mass shooting at an Orlando, Florida, nightclub earlier this week. Participants held signs showing the faces of shooting victims, whose names were read during the vigil. Photo: Sharon Sheridan

[Episcopal News Service] With prayer and song, a diverse crowd of worshipers gathered at the Episcopal Church of the Redeemer in Morristown, New Jersey, on June 15 to honor those killed and injured in a mass shooting at an Orlando, Florida, nightclub three days earlier.

Diocese of Newark Bishop Mark Beckwith joined speakers from various denominations and faiths in offering reflections during a worship service. Then he and members of the Morris Area Clergy Council led participants on a candlelight walk to the town green, where about 500 people listened as the names of the 49 people killed were read while individuals held signs showing the victims’ faces.

Speakers called for solidarity in opposing gun violence and all forms of hatred, including homophobia, racism, Islamophobia and misogyny in the wake of the Florida killing of mostly Puerto Rican patrons of a gay nightclub by an American Muslim who police shot to death to end the massacre. 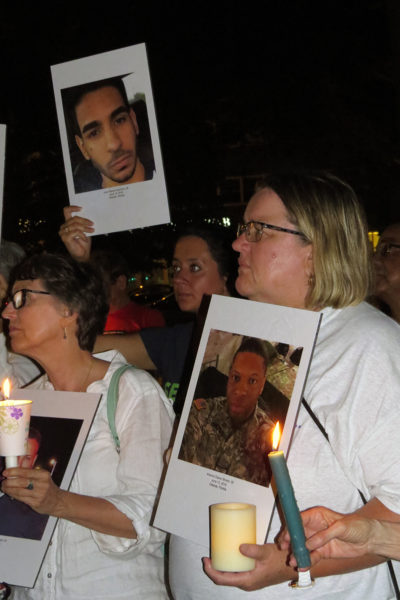 Fiona MacLachlan, right, of St. Peter’s Episcopal Church in Morristown, New Jersey, holds a picture of one of the victims of the June 12 shootings at a nightclub in Orlando, Florida. Photo: Sharon Sheridan

“As the mother of a transgender son, my heart bleeds” for the victims’ parents, said Redeemer member Yolanda Baker, who is Puerto Rican and offered her meditation in both Spanish and English. “I stand in unity. … We shall mourn together, and we shall heal together.”

“Our congregation, which is substantially but by no means exclusively LGBT, probably could have had its own vigil and shared our pain among ourselves,” she said. “The reality is that, not only did 49 people die in Orlando …  a piece of every gay, lesbian, bisexual, transgender, queer, intersection, nongender-conforming person in America died in Orlando. A piece of every Puerto Rican died in Orlando, and a piece of everyone who loves us died in Orlando. That’s why it’s important that our whole community came out tonight.”

Beckwith spoke of the devastating “curse” – the desire to diminish, damage or even kill others – that has “gone all over the world, creating a wave of shock, fear, anger and grief.” Increasingly, it targets those marginalized, or who people want to be invisible, he said, naming the victims of multiple mass shootings in recent years: Sikhs in Wisconsin, schoolchildren in Connecticut, African-Americans in South Carolina and now LGBT people in Florida. When this occurs, he said, “we want to respond in kind.”

We must come to terms with that desire, he said, and turn it to blessing. Foundational to his faith, he said, is that “blessing wins.”

A convener of Bishops United Against Gun Violence, Beckwith suggested actions for curtailing gun violence – including using terms such as “working for gun safety” instead of the divisive phrase “gun control.”

“There is no reason on God’s green earth … that anyone should be able to use an AR-15 [assault rifle],” he said, drawing applause. “It fires eight shots per second. No one needs such a firearm.”

He noted the growing movement of “Do Not Stand Idly By” (from Leviticus 19:16 – “do not stand idly by while your neighbor’s blood is shed”) that is pressuring gun manufacturers to quit making such weapons. 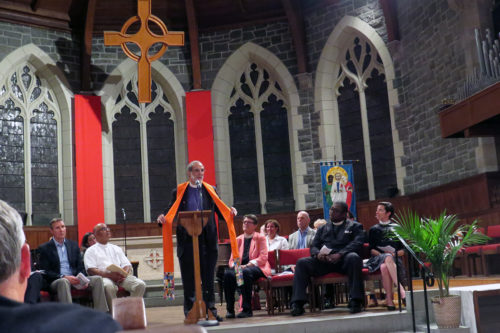 Diocese of Newark Bishop Mark Beckwith points out his orange stole, made by parishioner Colleen Hintz, at a vigil for the Orlando, Florida, shooting victims held June 15 at Church of the Redeemer in Morristown, New Jersey. Beckwith is a convener of Bishops United Against Gun Violence, which joined 85 other groups across the country in asking people to wear orange on June 2 as a witness against gun violence. Photo: Sharon Sheridan

In the days to come, Beckwith told ENS, he hopes that those who participated in the vigil will continue to exert pressure – “politically, morally and in witness” – to bring about change.

Across the country, Episcopalians are standing in prayer and witness, commemorating Orlando’s victims and calling for action. The Morristown vigil was one of more than a dozen listed on the Diocese of Newark’s website. (Readers should check with their local churches and dioceses for news of upcoming vigils and other actions.)

“I have been in prayer vigils these past two days,” Diocese of Rochester Bishop Prince Singh posted on Facebook June 15. “Mourning the hate crime in Orlando and lifting prayers for all victims of violence, especially our LGBT children of God.”

Another, interfaith service of “prayers, hope and strength” was scheduled for that evening in the diocese at Christ Episcopal Church, Pittsford, New York.

In Manhattan, about 130 people attended a street interfaith prayer vigil on June 14 in Harlem, hosted by St. Philip’s Episcopal Church.

Trinity Cathedral in Portland, Oregon, planned a Eucharist and prayer vigil for June 15 “to pray for all the victims of Saturday night’s massacre, to open ourselves to the grief and pain we experience, and to ask God’s wisdom and presence as we discern a way forward,” cathedral dean, the Very Rev. Nathan LeRud, wrote on the cathedral website. On June 19, following Sunday worship including special commemorations, prayers and music, Diocese of Oregon Bishop Michael Hanley and members of Trinity’s AFFIRM group will march under the cathedral’s banner in Portland’s annual Pride Parade, he said.

“Gay people know what it feels like to be scapegoated by society,” LeRud wrote. “In today’s world, that scapegoating extends to many other groups: transgender people, Muslims, illegal immigrants, gun owners, members of the NRA. Claiming ‘open and welcoming’ as our marching orders means working to understand not just the people I happen to like, the people who agree with my views and opinions, but most especially those who don’t. It means working to understand and even love people like [Orlando shooter] Omar Mateen. Nobody — absolutely nobody — is beyond the reach of God’s love.” 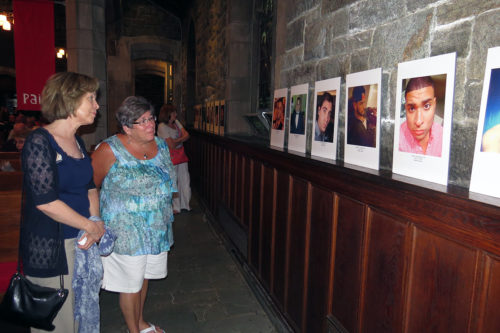 In Kansas City, Missouri, the head of Episcopal Community Services organized a rally – “kind of a flash vigil” – that gathered several hundred people and included interfaith speakers, said the Very Rev. Peter DeVeau, dean of Grace and Holy Trinity Cathedral there. On June 19, the regularly scheduled Evensong will include special readings, followed by “more of an open time,” he said. “It’s a time for mourning, reflection and resolve following the massacre of Orlando.”

Healing prayer with laying on of hands and anointing will be available. Worshipers will be invited to write “commitments to do loving and restorative acts on behalf of God’s people and world” on colored paper and insert them in a folding screen to create a kind of “wall” of resolves.

“It’s going to take all of us to address the issues that create these mass shootings,” he said. “We really have to, I think, as a people address what it is that’s causing this kind of rage in our society.”

The Diocese of Chicago offered opportunities for both prayer and action at its June 15 vigil at St. James Cathedral. The service concluded “with an invitation to take action against gun violence, homophobia and Islamophobia,” according to its digital newsletter. After the final hymn, participants were invited to “remain for prayer, anointing, counsel with the St. James pastoral team or conversation.”

In the Diocese of Western Louisiana, Bishop Jake Owensby preached at a Requiem Mass at St. James, Alexandria.

The attack in Orlando “was an attack on humanity itself,” he said. “In response to the violence besetting our nation and the world, some reach for their own weapons, seek to build walls, and repel refugees seeking asylum on our shores. These are understandable human responses. … But let’s not kid ourselves. There is nothing in the Gospels about finding closure by killing bad guys. On the contrary, Jesus explicitly teaches us to love our enemies and to turn the other cheek.”

“Love is costly,” he concluded. “But the resurrection assures us that love wins. … I urge us to honor those who fell in Orlando by devoting ourselves to being the instruments of peace in our own lives, in our neighborhoods, in our nation and in the world.”

— Sharon Sheridan is an ENS correspondent and a master of divinity student at Drew Theological School in Madison, New Jersey.