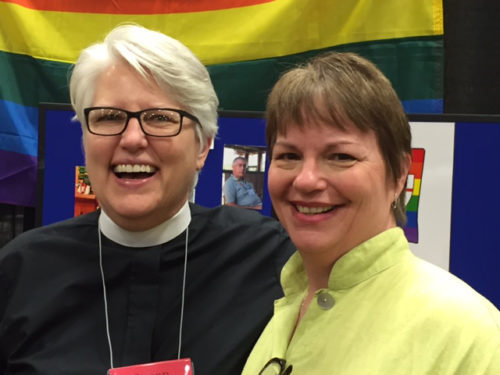 The Rev. Susan Hrostowski (left) and Kathryn Garner, who are suing to repeal the “religious freedom” law.

[Episcopal News Service] For the Rev. Susan Hrostowski, suing June 13 for LGBT rights in Mississippi felt like déjà vu all over again.

In April, the Episcopal priest and her wife Kathryn “Kathy” Garner were among four lesbian couples that successfully challenged a state ban on gay adoption.  In 2014, they also challenged the state’s ban on gay marriage.

Now, she has joined a federal lawsuit seeking to overturn another controversial anti-gay measure, known as the Religious Accommodations Act. It allows business owners, based upon their religious beliefs, to refuse service to LGBT persons.

Mississippi Gov. Phil Bryant, who signed the measure into law April 5 saying it was intended to prevent religious discrimination, is named in the lawsuit, along with other state officials. The law is set to go into effect July 1.

It is among a recent spate of laws involving religious beliefs but considered by some as contrary to Christian values. Another is a controversial “guns in churches” law that allows congregations to train and provide armed security teams during worship. That law took effect April 15 when Bryant signed it.

Hrostowski said her family’s sincerely held religious beliefs have been harmed in significant ways by the measure, also known as HB 1523.

“As a married lesbian, and a mother to a son with two moms, HB 1523 also causes significant burdens on my family life,” according to Hrostowski. “The state has gone out of its way to demean our family and deny us the dignity enjoyed by other families in our state.”

“Kathy and I now constantly live in fear that a restaurant could refuse to seat our family if they viewed our dinner date as a celebration of our marriage,” she said in filing the lawsuit with the Campaign for Southern Equality and others. “We no longer feel safe to travel, because a hotel could refuse to let us stay in a room together.”

They have asked the federal court to stop the law from taking effect.

“The state is giving priority to one particular religious viewpoint over others,” Hrostowski told the Episcopal News Service (ENS). “In writing and passing this legislation they, (the legislature and the governor), have targeted a very specific group of people. That’s unconstitutional.

“They have passed laws that allow discrimination based on a very specific type of religious perspective that is antithetical to my own and many other people’s. As an Episcopalian, we follow the teachings and example of Jesus Christ, chiefly to love one another as he loved us. That’s the perspective I’m coming from.”

Among other things, the law states that “marriage is or should be recognized as the union of one man and one woman” and that sexual relations are properly reserved to such a union. And that “male (man) or female (woman) refer to an individual’s immutable biological sex as objectively determined by anatomy and genetics at time of birth.”

Based on those beliefs, according to the law, social workers, public employees, and a wide range of businesses can refuse service to the LGBT community.

Mississippi Bishop Brian Seage said the law “codifies discrimination” by allowing businesses to treat one segment of the population differently.

“For example, if an LGBT couple walks into an office to get a marriage license, they don’t have to offer them one, but they do have to provide someone else who can,” Seage said. “To me, and to many others, that is flat-out discrimination, if an LGBT couple has to wait even 10 seconds longer than someone else.”

Seage, in a June 3 letter to diocesan clergy and congregations, offered a new policy for performing LGBT marriages.

“We had a system where a parish could go through a process of discernment and if the vestry voted in the affirmative, they could then petition the bishop to give them permission to offer blessings, and then marriages after the (June 26, 2015) Supreme Court ruling,” legalizing gay marriage.

The policy leaves the decision to perform gay weddings to the discretion of clergy “with the understanding that, just like in anything we do as clergy, we need to be in discussion with our parishes and our leadership,” Seage said.

It removes a previous requirement that congregations and clergy first enter a process of discernment and study, “culminating with formal vestry action and then submission to me of a petition requesting approval to perform same-sex weddings,” he said.

Seage and others had called for Bryant to veto HB 1523. In a PBS interview Seage called the “religious freedom” law “unnecessary and … an answer to something that’s not a problem” because clergy have always been able to decline to perform any wedding.

No ‘pistol-packing’ in Episcopal churches

Seage, and the Rev. Ann Whitaker, associate rector of St. Peter’s Church in Oxford, along with others have said that while the “guns in churches” law also seems antithetical to Christian values of peacemaking and reconciliation, it came on the heels of the “religious freedom” measure and, consequently has received less immediate attention.

“I don’t want to be a pistol-packing priest and I don’t think any of my colleagues in the state want that either,” said Whitaker.

Even though she recalled having “a gun pulled on me in a parish here in Mississippi many years ago. It was very frightening and I was grateful that I was not harmed. We were able to meet the need of this individual without incident – that’s the good thing.”

The law, which Gov. Bryant had said was a response to the June 17, 2015, shootings of nine parishioners during a Bible study at a Charleston, South Carolina, church. The victims were African American; the shooter, who was white, reportedly said he wanted to start a race war.

After some initial discussions, St. Peter’s vestry decided “there was not the necessity here to train anybody or have anybody bring a gun to church,” Whitaker said. And while they have talked about posting ‘no guns allowed’ signage, the church has yet to do so.

The Very Rev. Edward O’Connor, dean of St. Andrew’s Cathedral in Jackson, said he and the vestry also discussed posting signs banning weapons but “how does that prevent people from carrying in guns?”

Guns are part of the fabric of the state, located “in the buckle of the Bible Belt. The image that sparked the most outrage was that when the governor signed the bill, he did it with a .38-special (handgun) on top of the Bible. It was just disrespectful.”

Suzanne Pepper, who is chair of the diocesan Committee with LGBT Persons, called “the fact that anyone can go into a church with a gun, it’s just shameful and it’s dangerous. Guns are a deeply rooted Southern tradition but you still should not endorse someone carrying a gun in church.”

The two laws, together seemingly condoning violence and targeting the LGBT community, made the June 12 mass shooting in an Orlando gay nightclub seem crushingly personal, she said.

In particular, HB 1523 has “turned the hopefulness and the joy of the Supreme Court ruling into a demoralization, really,” she told ENS. “How can our state still be so prejudiced? It’s like our community needs love and compassion and understanding and healing.”

O’Connor agreed. He asked for prayers for the state, “prayers that we can come to the table with open hearts and open minds and know that we are not alone. We are changed by the narrative of each other’s lives; we need to hear them and learn from one another.”

But the laws have also fueled a divisiveness and lack of respectful public discourse, he said.

“Many of our Protestant sisters and brothers whose reading of Scripture is different than ours … and whose understanding of grace and mercy and what love requires is sadly very different than ours, (this) is where the lines have been drawn,” he said. “There’s an ‘us against them’ feeling. We’re scratching our heads. It feels a lot like the Jim Crow South,” O’Connor said, referring to former laws segregating races.

The reality also is that Mississippi Episcopalians are a very diverse group. “There are people in St. Andrew’s Cathedral and other churches who are adamantly opposed to the law and there are others who are absolutely for it. I have wonderful fine people who leave church on Sunday and go eat lunch with dear friends of 40 years who practice another kind of Christianity – there’s always been that tension.”

While acknowledging “there is some grace that has been spent trying to keep people at the table and teach that Episcopal-Anglican model of via media, that we can profoundly disagree but still be called to break bread together at the table.”

He added that, “what we most want is civil, kind, respectful discourse, and we’re not finding it.”

In the meantime, he is working with grass-roots organizations and community organizers, attempting to forge a way forward and “gathering people together as Christians and Jews and whoever to talk about what is right and just with regard to all people in this state.”

Pepper agreed. A native Mississippian who moved away but recently returned, she said she had hoped “to be part of a changed Mississippi, or that I could be part of the change.”

“Now, with the law, people can look at you and say, ‘If you’re straight come on in; if you’re not, then go away.’ It’s like what happened at the separate water fountains that had signs saying white people and colored people. That’s just not what ought to be happening in the year 2016.”

Hrostowski is a social work professor and vicar of St. Elizabeth’s Church in Collins, where the congregation dismisses the “guns in churches” law as also antithetical to Christianity.

She says she and Garner will continue to work for LGBT rights in Mississippi.

“I certainly hope to gain the repeal of this law,” she said. “I am with Presiding Bishop Michael Curry about being on fire for Jesus and the Jesus Movement and that is all part of this. One thing that makes me very angry is that people who espouse that kind of Christianity [one that discriminates] always talk as if their view of Christianity is the only view of Christianity. The world needs the Episcopal Church right now.”