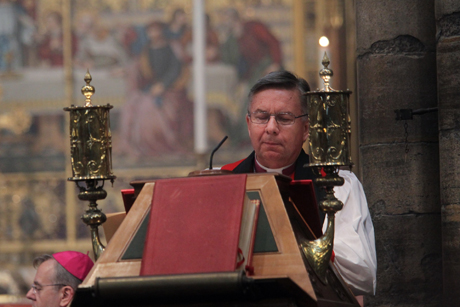 [Anglican Communion News Service] Anglican and Roman Catholic leaders were joined by senior figures from other Christian denominations last night at a special choral evensong in Westminster Abbey to celebrate the 50th anniversary of the Anglican Centre in Rome.

Anglican, Catholic and Orthodox Church leaders were present at the service, which was sung by the Westminster Abbey Choir. In his sermon, Archbishop of Canterbury Justin Welby praised the work of the center, and its director, Archbishop David Moxon, joking that the center was seen by some as the Anglican Communion’s spy station in Rome.

“Those are the first time I heard those words this evening,” Moxon told ACNS afterwards, “but I think in terms of intelligent reporting, in terms of a careful look at each other, in terms of good communication and awareness of each other, it is a humorous and anecdotal description which I enjoy.”

The service, he said, summed up “50 years of faith, hope and love,” and he added: “The Anglican Centre is a bit like a fiddler on the roof: it needs funding every year, it can’t guarantee its existence, but it tries to play a tune of faith, hope, love; to try to suggest that what unites us is greater than what divides us. That’s the point. Anglican, Roman Catholic and Orthodox Church leaders at a service of choral evensong at Westminster Abbey marking the 50th anniversary of the Anglican Centre in Rome. Photo: Westminster Abbey

“Sometimes people get a little cynical about ecumenism. Sometimes they wonder what the point is,” he said. “But living and working in Rome you can see the point. And now, especially, with this Pontificate – with Pope Francis and with Archbishop Justin – there is all kinds of evidence that it is worth it.

He said that collaborative work on issues of justice, people trafficking, refugees and city missions were “all ways in which the world needs our solidarity, our co-operation [and] our partnership.”

This was, he said, a new kind of ecumenism which was driven by mission. “Rather than just trying to close the dogmatic gaps – which are important to close – these two [Pope Francis and Archbishop Justin] are saying let’s generate a sense of communion now, where we can, on the ground.

“The more you walk together the better you talk together. A lot of people think you can only walk together once you have talked together enough. I think it is often the other way around.”

Last night’s service was one of a number being held this year to mark the 50th anniversary of the centre. In October, a €500-per-head (approximately £395 GBP) two-day gala meeting will be held at the centre. The proceeds will be used to create an endowment fund to secure the continued presence of the Anglican Communion’s permanent representation to the Holy See.