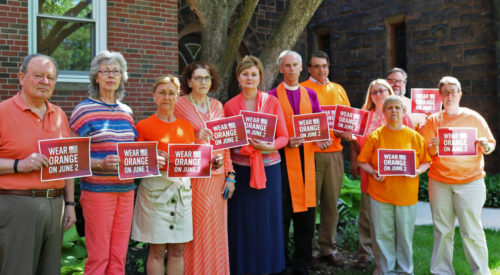 [Episcopal News Service] Episcopalians across the church wore orange shirts, orange ribbons and even orange liturgical stoles June 2 as a sign of their commitment to reducing gun violence in their communities.

The Wear Orange movement began in 2013 after Hadiya Pendleton, a 15-year-old high school student, was shot to death on the south side of Chicago just a week after marching in President Barack Obama’s second inaugural parade. Her friends asked people to honor Pendleton by wearing orange — the color hunters choose for safety — on her birthday, June 2. Their cause was taken up by gun violence prevention groups around the country who last year promoted the first National Gun Violence Awareness Day.

And this year Bishops United Against Gun Violence, a group of more than 60 Episcopal bishops that advocates for background checks on all gun purchases and other violence prevention measures, urged all Episcopalians to join the movement. 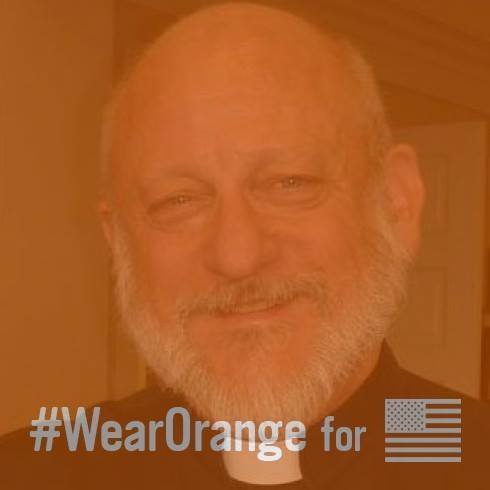 The Rev. C. Eric Funston of the Diocese of Ohio, who with the Rev. Rosalind Hughes, began encouraging Episcopal clergy to wear an orange stole on June 5, put up a temporary profile photo June 2 overlaying the Wear Orange logo on his face. Photo: Eric Funston via Facebook

Members of the clergy are invited to consider joining the movement initiated by the Revs. C. Eric Funston and Rosalind Hughes of the Diocese of Ohio to wear an orange stole on Sunday, June 5.

Bishops United also urges Episcopalians to work for handgun purchaser licensing, as supported by Resolution B008 of the 2015 General Convention, the passage of an effective statute making gun trafficking a federal crime, and the development of smart gun technology.

“As religious leaders, we are sometimes asked why we involve ourselves in divisive political issues such as this one,” Newark Bishop Mark Beckwith, the convener of the bishops group wrote June 2 in an op-ed piece in the Newark, New Jersey, Star-Ledger newspaper. “Our answer is two-fold: First, to speak in the language of one of Jesus’ best-loved parables, we must not only be good Samaritans, ministering to the man who fell in among thieves; we must also make safe the road from Jericho to Jerusalem, and that is an inherently political business. And second, this issue is not as divisive as it may seem.”

Beckwith said “overwhelming majorities of Americans, including large majorities of gun owners and members of the National Rifle Association, support requiring background checks for all gun purchases. The numbers fluctuate from poll to poll, but seldom dip below 85 percent.” 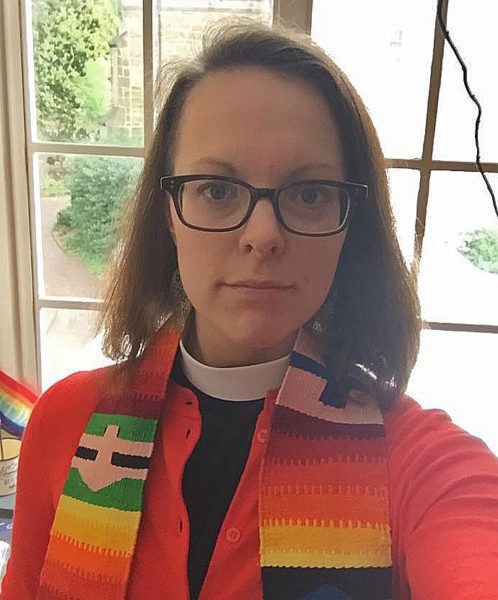 The Rev. Callie Swanlund, Diocese of North Carolina, was among those Episcopalians who posted photos of themselves on Facebook and Twitter June 2 wearing orange. Photo: Callie Swanlund via Facebook

Across Facebook and Twitter Episcopalians posted versions of the Wear Orange logo and photos of themselves wearing orange and speaking out for an end to gun violence. “Remembering victims and continuing to commit to ask ‘Are there any unlocked guns in the house?’ before sending my children on playdates,” the Rev. Callie Swanlund, associate rector at Christ Church in Raleigh, North Carolina, wrote with a photo of herself in an orange jacket and stole.

The Rev. Gary Goldacker posted a photo of himself, writing “Got my orange on because when you’re University of Illinois and a Bronco fan, there are lots of choices! And when you live in the St. Louis area, gun violence is an everyday reality.” His post ends with Facebook’s emoticon for feeling sad.

Connecticut Bishop Ian Douglas spoke in a video message posted on the Living Reconciliation website, saying “death and destruction is not of God,” and calling for education, appropriate legislation and collation building over the issue.

“The church has a key role to play,” he said. “We need to foster a conversation, create space where gun owners and those who do not possess fire arms can have a conversation about what it means to be children of God.”

The infamous Dec. 12, 2012, school shooting at Sandy Hook Elementary School took place in Newtown, Connecticut, and one of the 28 people, mostly young children, whom Adam Lanza killed was Benjamin Andrew Wheeler, 6, a member of Trinity Episcopal Church in Newtown. That mass shooting was part of the impetus for the Bishops Against Gun Violence group. 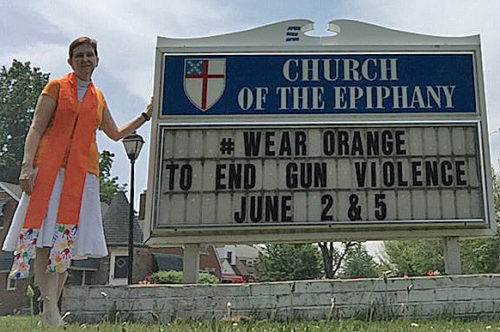 “With sacred and secular rituals of memorial services and vigils, we struggle to honor and cherish the loved ones we have lost,” Douglas recently wrote in The Christian Century magazine. “We owe our children something we can no longer give them — safety, protection, a society in which the slaughter of innocents is unthinkable rather than routine. Sadly, the best we can do is redoubling our efforts to provide some sense of security to the children who are still with us. The work is urgent: in the three years after the tragedy in Newtown, a child under 12 was shot and killed in this country every other day.”

Director for Continuing Indaba for the Anglican Communion the Rev. Phil Groves noted June 2 that when the Anglican Consultative Council met in April in Lusaka, Zambia, the members identified cultures of violence as a key feature of life around the world and passed a number of resolutions that contained commitments to help change those cultures.

“We want to support this very important move by Bishop Ian.”

According to Douglas gun crime alienates people from each other and their true selves. He said, “In the U.S. every year 30,000 people continue to die directly because of gun violence and 60 percent of them at their own hand… Our vocation is to work together and find that space where arm-in-arm we can say that such death and destruction is not countenanced in our society anymore. ”