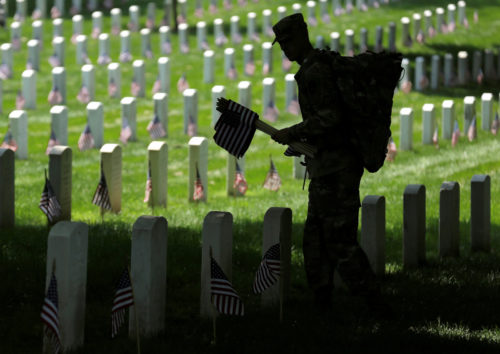 A soldier of the 3rd U.S. Infantry Regiment (The Old Guard) places flags in front of the graves at Arlington National Cemetery in Washington, U.S., May 26. Photo: Joshua Roberts/Reuters

[Episcopal Church Office of Public Affairs] Of all the civic holidays on our U.S. calendar, Memorial Day may come closest to a deep embrace of spiritual values. Originally called “Decoration Day,” this remembrance began following one of the most poignant eras in our country’s history. Between 1864 and 1866, just after the end of the American Civil War, community leaders established a date upon which we could honor both Union and Confederate war dead. To remember those who had died in the service of their country, these leaders established observances that enabled Americans to engage in activities of unity and spiritual healing.

Memorial Day is a sacred commemoration. The persons we honor on this day are a silent witness to a virtuous honor that is particularly dear to people of spiritual values. This is the time each year when we remember men and women who have been, as is written about a leader of Roman soldiers in the New Testament, “…set under authority (Luke 7:8) …” On this day we remember that some of those under authority have, as a consequence of their service, sacrificed their lives.

Is there a cause for which dying is honorable? Laudable? Since the beginning of my military service 50 years ago, I have been trying to answer that question. For those who embrace Godly values, the question about dying in the service of your country has some important implications. Military training almost always contains the underlying lesson that being involved in the fulfillment of a mission could end up in death. Obviously, military service is not a commitment to be considered lightly by those who take the oath of office to “…support and defend the Constitution of the United States…” (10 U.S. Code, Section 502). At the same time, few of us ever thought they we would die during a military mission. Unfortunately,  some have died.

I believe that people of faith can find spiritual values from the stories of men and women who have made the “ultimate sacrifice” of their lives. A few years ago I had the honor to conduct the Arlington National Cemetery burial service for Medal of Honor awardee Lieutenant Colonel Don C. Faith. Faith, who had been killed during the Korean War, had the reputation of being a “Soldier’s Soldier,” who gave his life doing everything he could to simultaneously keep his soldiers alive and achieve the mission. His dedication to his men and to his mission has become a timeless inspiration to service members and citizens alike.

Though personally we cannot thank service members who have made the ultimate sacrifice in the service of their country, surely we can honor them. We can pray that the memory of their sacrificial service will endure. We will remember them.