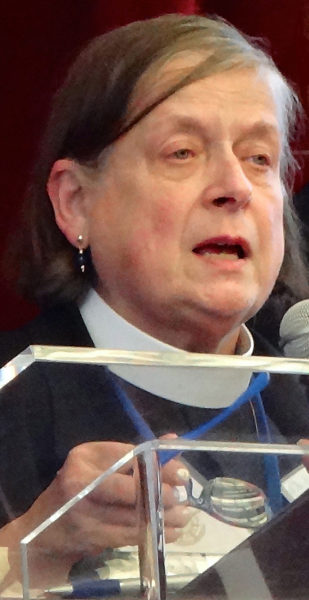 [Episcopal Diocese of Long Island] The Rev. Joan P. Grimm Fraser, an Episcopal priest and leading spokesperson on women’s issues in church and society has died.

The province includes six dioceses in New York, two dioceses in New Jersey and the off-shore dioceses of Haiti, the Virgin Islands and the Convocation of Episcopal Churches in Europe. About the UNCSW she had said, “It is an opportunity to give a voice to women here and abroad who don’t have a voice” about health, poverty and justice.

The Rt. Rev. Lawrence C. Provenzano, bishop of Long Island, said, “Each of us will miss Joan’s great spirit and faithful, thoughtful counsel. She was a pioneer in our church and one of the wisest, most faithful priests I have ever known.”

There will be a Requiem Eucharist May 27 at 11 am, at the Cathedral of the Incarnation, Garden City, New York. Provenzano will preside.

The Fraser family has provided the following biographical details.

The Rev. Joan P. Grimm Fraser, one of the first women ordained in the Episcopal Church, and a geologist, has died at the age of 68. Mother Joan, as she was known to parishioners at Holy Trinity Parish in Hicksville, New York where she served as rector since 2004, was admired throughout the church as a kind and loving priest who blazed a trail for other women.

Born in Berea, Ohio in 1947, Fraser graduated from Allegheny College in 1969 with a B.S. Later that same year she entered the Episcopal Theological Seminary (ETS) in Cambridge, Massachusetts, as the only woman in her class. She graduated with a Master’s of Divinity in 1973, and was the first woman ordained a transitional deacon in the Diocese of Ohio in 1973. She was the 33rd woman ordained a transitional deacon in the nation.

Mother Joan had been invited to be one of the women who came to be known as the “Philadelphia Eleven,” who were ordained in 1974 in “irregular” fashion prior to authorization by the General Convention of the Episcopal Church for the ordination of women to the priesthood. However, continuing her lifelong practice of abiding faithfully by the decisions of her church, and obeying her bishop, Fraser declined to be one of the very first women ordained priest, and chose instead to serve as deacon at that historic mass.

She served as the associate chaplain at Kenyon College in Ohio from 1974-1976. She was the first woman formally approved by the Diocese of Ohio to be “regularly” ordained priest in 1977. Her deliberate care and intentionality led to her being the second woman ordained to the priesthood in Ohio. Many women throughout the U.S. were ordained in January of 1977, as soon as it was permitted within the Episcopal Church. Fraser had committed to being ordained priest in the chapel at Kenyon at a time when the students could participate. That delay meant being ordained priest in March of 1977. Mother Joan was thus one of the first 50 women regularly ordained to the priesthood in the Episcopal Church. The Rt. Rev. John Burt ordained her both deacon and priest.

Following her ordination, it was nearly impossible for a woman priest to obtain paying work, let alone full-time paying work. After her ordination, at her bishop’s urging, and with financial support from the Diocese of Ohio, Fraser obtained an M.S. in Geology from the University of Arizona in 1978.

She served full-time as a petroleum geologist for Amoco Production Co. from 1978-1985. Throughout her long and varied life in the church, Mother Joan frequently took lower paying, part-time or even non-paying jobs so as to be able to serve the church in an environment where women were not always considered desirable candidates for clergy positions. She was known for her cheerful disposition and her wise acceptance of the role she played as a trailblazer for others. She told many younger clergy she mentored that it was her delight to serve as a “doorknob” for other women participating in the life and ministry of the church.

Throughout her long career Fraser served parishes in Ohio, Colorado (where she was the first full-time, fully-stipended female priest), North Carolina, Western Massachusetts (where she served as Canon at Christ Cathedral), New York City, and Long Island. She was appointed by the Presiding Bishop of the Episcopal Church to be the 2015 Anglican Delegate to the UN Commission on the Status of Women.

Mother Joan married Ross Fraser, director of planning at the Nassau University Medical Center, in 1979. He survives her, along with six godchildren, countless cousins, and many other family and friends. Among her friends and family, she was known as a gracious, wonderful hostess, cook and artist. At the time of her death, complex negotiations were being carried out for the sharing of her secret chocolate sauce recipe. In addition to her many other accomplishments she obtained a BFA in Design from the University of North Carolina at Greensboro in 1999.

Memorial gifts may be sent to the Domestic and Foreign Missionary Society for the benefit of the Joan Grimm Fraser UNCSW Legacy Fund, 815 Second Avenue, New York, NY 10017.

Editor’s note: A previous version of this story incorrectly stated the year of the Philadelphia Eleven ordinations. It was 1974, not 1976.