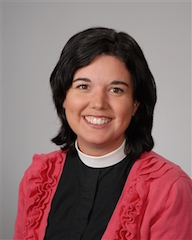 The Rev. Hope Benko. Photo: Seminary of the Southwest

[Seminary of the Southwest press release] Dean and President Cynthia Briggs Kittredge has announced the hire of the Rev. Hope Benko to director of enrollment at Seminary of the Southwest effective June 1, 2016. Hope comes to the seminary from All Saints’ Episcopal School in Fort Worth, Texas, where she has served as upper and middle school chaplain and religion teacher since 2011.

“I am looking forward to welcoming Hope to our campus for this important position. Her deep and broad connections throughout the Episcopal Church, her ministry as chaplain in an ecumenical student body at an Episcopal school and her degree in communication and marketing make her a wonderful fit for our team and our prospective student population at Seminary of the Southwest,” says Kittredge.

A lifelong Episcopalian, Benko has served parishes in the dioceses of Missouri and Western Louisiana. In the Diocese of Fort Worth she has served as priest-in-charge at St. Mary’s in Hillsboro and as deputy to General Convention in 2015.  She’s spent her ordained ministry deeply involved in Christian formation and looks forward to supporting the vital work of forming priests and counselors for the Church in her role as Director of Enrollment Management.  Benko is a graduate of Stephens College, where she studied mass communication and of Seabury-Western Theological Seminary.  Her husband, the Rev. Andrew Benko is finishing his dissertation for a Ph.D. in New Testament, and they have two children, aged 7 and 5.