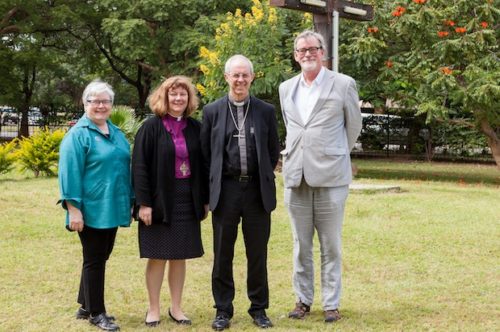 [Anglican Journal] The April 8–19 meeting of the Anglican Consultative Council in Lusaka, Zambia, was marked by a sense of unity and common purpose, according to Canadian delegates Bishop Jane Alexander and Suzanne Lawson.

“There was a definite sense of being together as a family of churches,” said Alexander, “[and] a real desire to talk about the things that brought us together and connected us.”

There had been some uncertainty leading up to the meeting about whether or not disciplinary measures would be imposed on the Episcopal Church following a call from the Primates’ Meeting in January 2016 for the Episcopal Church to face “consequences” for its decision to perform same-sex marriages. But, the ACC declined to impose any sanctions.

Nor, according to Alexander and Lawson, was there much discussion of Canada’s upcoming vote on same-sex marriage — which, both admitted, came as a surprise.

“Nobody asked me [about it],” said Lawson. “I was all ready to engage, [but] no — I think people were just delighting in the relationships that were being built.”

Alexander said this refusal to punish the Episcopal Church was consistent with the tone of the meeting, which emphasized work being done across the Anglican Communion, particularly initiatives around evangelism and discipleship, climate justice and the Bible in the Life of the Church Project.

The work around the Bible struck Lawson as being particularly exciting, and she noted that the Anglican Communion Office has prepared a website that will likely be online by the end of June. According to Alexander, the website will contain “over a hundred” resources, such as Bible studies geared toward helping parishes and individuals engage with Scripture.

Discussions around evangelism and discipleship also struck a chord, to the extent that the schedule was rearranged to allow more time for them, said Alexander.

“[Discipleship] is important for us in a context that is increasingly secular, but it is also really important in contexts around the world where Christians are under persecution or other religions are rise,” she noted.

The meeting also showcased the Anglican Communion’s ecumenical relationships, with partners from the Coptic, Orthodox, Catholic and Old Catholic churches present as well.

The meeting also saw the election of Alexander to the ACC’s Standing Committee, which means she will be involved in the council’s work for the next three to four years, until the next meeting.

“I’m quite excited about it. I love the Communion, and the standing committee is really quite a representation of the Communion,” she said, adding that one of the major priorities in the coming years will be developing a better communication strategy so that Anglicans are more aware of the work their church is involved in around the world.

“If we don’t share our own story, someone else will tell it, and it might not exactly be the real story of the Communion.”

The Canadian delegation also included Archdeacon Michael Thompson, general secretary of the Anglican Church of Canada, who went in place of Archdeacon Harry Huskins, and Archdeacon Paul Feheley, the primate’s principal secretary, who was seconded to head the communications team.