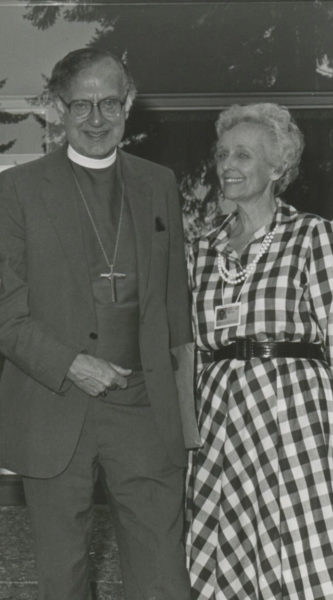 [Diocese of Los Angeles] Canon Ruth Nicastro, longtime missioner for communication in the Diocese of Los Angeles and editor emerita of its Episcopal News, died March 28 while hospitalized in Thousand Oaks, California. She was 90 and had been suffering the effects of two strokes in recent years.

Well known across the Episcopal Church and the Anglican Communion for her award-winning expertise, Nicastro was in 1986-89 president of the churchwide Episcopal Communicators and in 1988 a member of the international Lambeth Conference communication team, serving at the invitation of then Archbishop of Canterbury Robert Runcie.

In 1980 Nicastro won the first-ever Polly Bond Award, thereafter presented annually by Episcopal Communicators and so named for an esteemed former communication director in the Diocese of Ohio. Nicastro won the award for a diocesan newspaper supplement titled “The Homeless Millions,” which addressed the international refugee situation and the church’s role in providing hope and relief. Upon her 1993 retirement, the Communicators also presented to her the Janette Pierce Award for outstanding service to the Church — an award she had helped to establish in memory of another close friend and pioneering communicator.

“There are few people in the history of the Episcopal Church in the Diocese of Los Angeles who have shaped the diocesan community as positively and significantly as Ruth Nicastro has done through the years,” said Bishop Diocesan J. Jon Bruno. “Her friendship and mentoring will remain with me always. Our hearts and prayers are with her beloved Leo and the Nicastro family.”

“Ruth Nicastro was the finest – as a reporter, writer, and editor, friend and colleague,” said Borsch, who retired as Los Angeles bishop diocesan in 2002. “She could be splendidly critical and appreciative at once, with insights that went to the heart of vital issues in the diocese and larger church – at home and in the nation and the Anglican Communion. I first met her in Nigeria. I loved her.”

Nicastro and Borsch first worked together in the service of the international Anglican Consultative Council, of which he was a member and she a team journalist. In the Council’s 1984 meeting in Nigeria they served together with Bishop Edmond L. Browning, then leader of the Diocese of Hawaii and later 24th Presiding Bishop of the Episcopal Church. These colleagues continued their collaboration in 1987 in Singapore for the Council’s next meeting, at which they were joined by the late Pamela P. Chinnis, later elected president of the Episcopal Church’s House of Deputies. Their close friendships and professional work, including their ties with Runcie as Archbishop of Canterbury, produced fruitful and strategic guidance for the church at the time.

“I first knew Ruth as a professional colleague: possessed of creativity, strategic thinking skills, commitment to God’s project and curiosity about the ways faithful people live out their baptismal vows,” said Barbara Braver, retired communication assistant to both presiding bishops Edmond Browning and Frank Griswold, and previously communication officer of the Diocese of Massachusetts. “Over four decades I came to love her ever more as a friend: rich in wisdom, compassion, loyalty, and with a delightful ability to find joy and humor in the daily round.”

Retired Episcopal Life editor Jerry Hames also praised Nicastro for her professionalism, kindness, and experience shared while she served as an early member of the Episcopal Life Board of Governors.

In Los Angeles, Nicastro was named diocesan missioner for communication and editor of the diocesan newspaper in 1977 by Bishop Robert C. Rusack. She had served previously since 1974 as an assistant for communication on the diocesan staff. Major activities of those years include ordination of women, release of the 1979 prayer book and 1982 hymnal, the closing of St. Paul’s Cathedral and construction of the Cathedral Center in Echo Park.

Throughout her tenure as editor, Nicastro advanced the diocesan newspaper to new journalistic standards in years well before the advent of electronic mail and the Internet. Her reporting championed various issues within the diocese, including the ordination and full inclusion of women, as well as for LGBT people of faith. Nicastro retired as missioner and editor in 1993 when she was succeeded by Robert Williams as communication director. Bishop Borsch at that time named Nicastro an honorary canon of the Cathedral Center, and she continued to serve on the Program Group on Communication and the Episcopal News editorial board for many years.

“Ruth’s meticulous care of her publications was legendary,” said Janet Kawamoto, current editor of The News, whom Nicastro first hired in 1981 as her assistant. “She was a generous, funny and wise friend, a supportive and encouraging mentor, and a person of quiet but inspiring faith. She set the standards to which I will ever aspire.”

A devoted volunteer serving two diocesan institutions, Nicastro was a board member of Pasadena’s Hillsides Home for Children and president of the Friends of the Neighborhood Youth Association, a Los Angeles agency based near her longtime Mar Vista residence.

She was in recent years a parishioner and former vestry member of St. Bede’s Church, Mar Vista, having previously attended St. Alban’s, Westwood, where she sang in the choir for several decades under the direction of Canon James Vail and took active part in refugee resettlement projects in response to the plight of Vietnamese “boat people.” In earlier years, she also sang in the choir at Church of the Advent, Los Angeles.

A native Southern Californian, Ruth Moody was born in January 18, 1926, in San Fernando, California, and grew up attending St. Simon’s Church there. After her father, Clyde, an attorney, died at an early age, young Ruth and her mother, Gertrude, sister, Anna, and brother, Richard, united to meet new challenges. Ruth went on to graduate Phi Beta Kappa from Pomona College and worked for Macmillan Publishing in both San Francisco and New York. While working in Manhattan Ruth met Leo, and the two were married for 65 years.

At the family’s request, in lieu of flowers, memorial gifts may be made to the college-access programs of Neighborhood Youth Association, 1016 Pleasant View Ave., Venice, CA 90291.

— Robert Williams is canon for community relations in the Diocese of Los Angeles and a past communication director of The Episcopal Church.