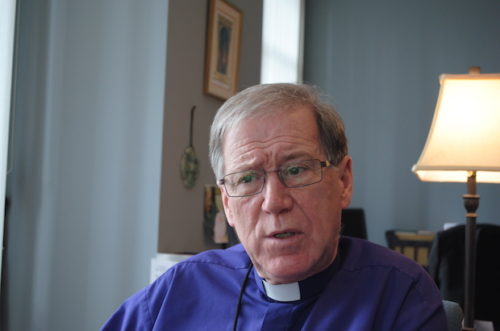 “We’re mindful of our need to reach out to those who are going to be hurt or offended by a decision of General Synod,” says Archbishop Fred Hiltz. Photo: Tali Folkins

[Anglican Journal] Some bishops have expressed concern about the possibility that some priests may go ahead and marry gay couples in the event that a resolution changing the marriage canon to allow same-gender marriages is rejected at General Synod this summer, said Archbishop Fred Hiltz, primate of the Anglican Church of Canada.

“If it’s not approved, then, as we sometimes, say…there could be some ‘civil disobedience’ on the part of clergy and parishes, and the bishops are going to have to handle that, because all of us that are ordained make a solemn promise to conform to the doctrine, discipline and worship of the Anglican Church of Canada,” Hiltz told the Anglican Journal April 12. Hiltz made the comments during an interview on the House of Bishops meeting last week, April 4–8.

Asked to clarify if by “civil disobedience” he meant same-gender marriages in defiance of a “no” vote, Hiltz replied, “That’s a possibility. Bishops are aware of that. We’re mindful of our need to reach out to those who are going to be hurt or offended by a decision of General Synod.”

Whatever the outcome of the vote at the meeting July 7–12, Hiltz said, the bishops need to be aware that the church risks losing members who may be incensed to the point of leaving. Bishops may decide to hold “post-General Synod” gatherings, which would enable people to “express what they need to express and consider how we continue to walk together,” he said.

“We have to be mindful that if it gets approved on first reading, there may be some clergy and parishes that may say, ‘That’s it—we don’t think we can be part of this church anymore.’ That’s a possibility,” he said.

“If it’s not approved, there could be people that will say that, too. I’ve had some correspondence of that nature lately.

“I know it’s difficult for people to hear me say this, but…if it doesn’t pass, the LGBT community is going to be deeply upset—if not, in fact, deeply offended,” Hiltz added. “And we will have to seize that as a challenge and an opportunity as a church to be, I think, much more deeply engaged with them in terms of their lived experience of their lived covenantal love one for another.”

To pass its first reading at General Synod this July, the resolution to allow same-sex marriages needs a two-thirds majority from all three orders—bishops, clergy and laity. On February 29, the House of Bishops announced that they were unlikely to get the needed two-thirds majority. Hiltz later told the Journal that he believed roughly a third of the church’s bishops were in favour, a third were opposed and another third were struggling with the issue.

Today, with about three months before General Synod, Hiltz suggested this still seemed to be the case.

Although some bishops have suggested the possibility of other options beyond a vote simply in favour or opposed to changing the marriage canon, Hiltz said no clear consensus on any such option emerged out of last week’s House of Bishops meeting.

“There’s an appetite for saying, ‘Well, if we don’t amend the canon, how do we pastorally care for gay and lesbian people in our church?’ Hiltz said. “So that’s a conversation, I think, that’s continuing—it’s not one that can be rushed” in the form of a proposal, for example, for General Synod to consider this July from the House of Bishops, he said.

“We’re not anywhere near that. But my sense is that conversation is probably going to continue past General Synod.”

The Anglican Journal also spoke with Bishop Larry Robertson, of the diocese of Yukon, who said he found the opportunity to talk about the “pastoral implications” of the marriage canon vote during the bishops’ meeting.

“Regardless of what happens, people are going to be affected—whether there is a ‘no’ vote, or a ‘yes’ vote, or a delay vote or whatever it is,” he said. “We spent some time on just how do we then deal with the hurt and the pain of a result that people weren’t expecting or didn’t want.”

Many of the bishops, he explained, plan on sending out pastoral letters regardless of the vote’s outcome, and he plans on holding a day for diocesan lay and ordained leaders to sit down and talk about what happened.

The marriage canon was only one of several topics to which bishops devoted themselves at last week’s meeting. One highlight of the week, Hiltz said, was a session on dialogue with Islam that included a presentation by David Goa, director of the Chester Ronning Centre for the Study of Religion and Public Life at the University of Alberta. Among other things, Hiltz said, Goa spoke about the importance of Jesus and Mary in the Muslim tradition, and told them that religiously motivated violence was “a tragedy, a betrayal of the way they understand Allah.”

Another was a talk on the global refugee situation by Ian McBride, executive director of AURA, an alliance between the Anglican diocese of Toronto and the Toronto Conference of the United Church of Canada, aimed at helping with the settlement of refugees. Among other things, McBride informed them that there are now an estimated 60 million refugees worldwide, about four million of whom are Syrians, Hiltz said.

Robertson said he found the presentation on Islam “very interesting,” and noted that while the Yukon doesn’t have thousands of Muslims, there are “more than you would think,” due to the influx of immigrants from countries in the Middle East.

“In Whitehorse…there is a regular group of Muslims that meet on a regular basis,” he said. “The big cities have pockets and groups of Muslims.”