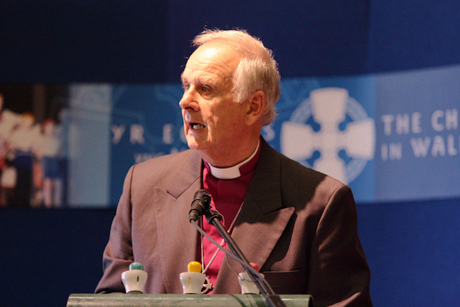 [Anglican Communion News Service] The Bishops of the Church in Wales have responded to a year of debates and consultations on same-sex marriage within the Province by concluding that the Church “is not yet ready to allow or bless same-sex marriage”; but they said that “the debate is not over” and stressed that the Church must be a place where gay and lesbian people can be “honest and open, respected and affirmed.”

The Bench of Bishops made their statement in a joint pastoral letter issued at the start of the Province’s Governing Body meeting, taking place this week in Llandudno, North Wales.

They commit themselves to providing a safe place within the Church for all gay and lesbian people.

“We are not ready, as a Church, to take the step of authorising same-sex marriage,” the Archbishop of Wales, Dr Barry Morgan, said. “There is no point in bringing forward a Bill for it to fail.

While rejecting the idea of a Bill to bring to allow same-sex marriages to be conducted in Church in Wales buildings; or for a formal authorised liturgical service of blessing for civil same-sex marriages; the bishops have released a series of prayers which may be said with a couple following the celebration of a civil partnership or civil marriage.

“We, as bishops, feel that this is the right thing to do at this time,” Dr Morgan said. “I realise that some people will regard these prayers as too little too late and others will regard them as a step too far.

“No one is compelled to use them, but they are provided for those who would like to do so. These prayers do not constitute a service of blessing.”

The full text of the letter from the Church in Wales’ Bench of Bishops:

One of the most contentious issues for Christians in our day has been the question of how the Church responds to those attracted to the same gender who seek the blessing of the Church upon the committed partnerships they form.

Over the last eighteen months, we have conducted a wide consultation in Governing Body and with the dioceses to explore whether the faithful of the Church in Wales felt it would be appropriate to acknowledge same sex unions in Church, by offering a Blessing, or even permitting the marriage of same sex couples in Church. Given that the civil law of the realm has now been changed to permit marriage of same sex couples, many see this as a natural next step.

The results of the consultation have been very varied: in some dioceses there was a strong voice for the status quo, in others a majority who wanted to see change. In the subsequent debate in Governing Body, it became clear that although a majority of members supported change, there was certainly no consensus, and any move to introduce changes in canon law would not meet the required two thirds majority of Governing Body, voting in houses, to enable such changes. Furthermore, any change to the teaching of the Church on Marriage, or the authorisation of any blessing of these unions in the life of the Church, would depend on legislation by bill procedure, which requires such enhanced majorities to take effect.

Since the conclusion of our consultation, the Primates of the Anglican Communion have also met in Canterbury in January of this year. The issue of the Church’s ministry to gay and lesbian persons was at the centre of their agenda, especially since The Episcopal Church (of the United States) has taken steps to amend their marriage canon to remove references to the gender of the couple.

The Primates condemned homophobic prejudice and violence and affirmed their commitment again to offer pastoral care and loving service irrespective of sexual orientation. They also rejected criminal sanctions against same-sex attracted people. They recognised that the Christian Church, including Anglicans, has often acted in a way towards people on the basis of their sexual orientation that has caused deep hurt. They expressed their profound sorrow and affirmed again that God’s love for every human being is the same, regardless of their sexuality, and that the Church should never by its actions give any other impression.

Nevertheless, they also reasserted the understanding within the Anglican Communion as a whole that marriage is between a man and a woman in faithful, lifelong union. They indicated that they believed that any move away from this understanding is considered by many of them as a departure from the mutual accountability and interdependence implied through being in relationship with each other in the Anglican Communion.

What this all means is that we, as Bishops of the Anglican Communion, mindful of the results of our consultation and the Statement of the Primates of the Anglican Communion, and of all our members, including those who are gay and lesbian, do not feel that we can support at this time a move to change the discipline of the Church in Wales with respect to the teaching on marriage, nor can we permit the celebration of public liturgies of blessing for same sex unions.

Nevertheless, we acknowledge the gay and lesbian members of our Church as part of our family, and we wish to address them directly:

“Dear brothers and sisters in Christ,

We recognise that you have often been persecuted and ostracized by the Church for your sexuality, that you have been mistreated by the Church, and forced into secrecy and dissimulation by the attitudes of prejudice which you have faced. We deplore such hostility, and welcome and affirm the words of the Primates that condemn homophobic prejudice and violence. We too commit ourselves to offering you the same loving service and pastoral care to which all humanity is entitled, and we commit ourselves to acting to provide a safe space within the Church and within our communities in which you can be honest and open, respected and affirmed.

While as a Church we remain unable to bless the committed partnerships you form in marriage or in civil partnership, yet we commit ourselves as bishops to work for a Church in which you can be fully affirmed as equal disciples of Jesus Christ or seekers after truth. We will pray with you and for you, that together we may seek God’s blessing on our lives, and for faithful discipleship.”

Since 2005, the Bench of Bishops has acknowledged that there are a range of views with respect to homosexuality, which have to be recognized as “honest and legitimate differences” within the diversity of opinion in the Church in Wales.

Given that diversity in the Church in Wales, and our commitment to affirm the place of gay and lesbian disciples within the Church, we believe that it is appropriate to offer prayers in response to the pastoral need of those gay and lesbian persons who are making profound commitments to friendship or partnership. With this pastoral letter, we offer prayers which we believe are suitable for those who are marking a committed relationship. Whilst we do not prescribe their use, where they are found suitable or helpful, we are happy to commend them.

The issues around human sexuality that are being debated in the Church will not go away, and the pain and tensions experienced in the debate are not over. We do believe however that we are called to live in love and charity with one another, whatever our experience or convictions on this issue, and we call upon all followers of Jesus Christ to respond with grace and as much accommodation as possible to all our brothers and sisters in Christ, including those who are gay or lesbian.

May the Lord bless his Church with such love and understanding that we may always walk in his ways of mercy.