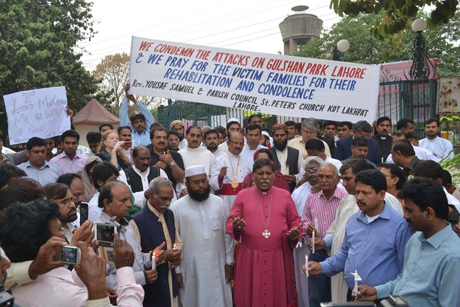 Christians, Muslims and Hindus light candles and join in prayer at the site of last week’s bomb attack in the Gulshan-e Iqbal park in Lahore, which resulted in the deaths of at least 76 people and 300 people being injured. Photo: Diocese of Raiwind

[Anglican Communion News Service] About 200 Christians, Muslims and Hindus gathered April 4 at the site of last weekend’s horrific Easter Day bomb attack for a united act of solidarity and sympathy for the victims of the attack.

The death toll from the attack rose to 76 on Friday as Pakistan officials said that some of those who had been injured in the attack did not survive. More than 300 people were hurt and several dozen are still understood to be undergoing treatment in hospital. Some of these are in a serious condition.

This weekend’s gathering at the Gulshan-e Iqbal Park began with a peaceful demonstration at 5:40 p.m. – the exact moment that last week’s blast occurred.

Candles were lit and Christian, Muslim and Hindu religious leaders – including the Moderator of the Church of Pakistan, Bishop Samuel Azariah – joined hands as they prayed for the victims and their families.

Among the 200 people present were representatives from the Episcopal Church’s Diocese of Louisiana and the Presbyterian Church of Scotland. The Church of Pakistan is a United Church. In addition to being a province of the Anglican Communion it is also a member of the World Council of Reformed Churches and the World Methodist Council.

The Taliban off-shoot Jamaat-ul-Ahrar has claimed responsibility for the suicide bombing, saying that the target of the attack was Christians celebrating Easter. But the indiscriminate nature of the suicide bombing, near the entrance to the women and children’s section of the Gulshan-e Iqbal park, meant that many more Muslims were killed and injured than Christians.

Archbishop of Canterbury Justin Welby wrote about the attack in a column for the UK’s Financial Times newspaper.

“Lahore is a place I know well,” Welby wrote. “Two years ago, I visited the city to meet Christian leaders and to pray with them. The stories I heard troubled me deeply. There was a real feeling that the Christians of Pakistan were under intense pressure, fearing to worship, even fearing for their lives. Last Sunday’s murderous actions do nothing to dispel that feeling.

“The friend I spoke to this week, who lives daily with intimidation and pressure, listened politely; he thanked me for my words of sorrow for the victims and condemnation of such dreadful atrocities. But then he said: “Justin, condemnation is not enough, we must go beyond condemnation to something better.”

“Beyond condemnation? What could that mean?”

He went on to explain that while it was important for leaders to “condemn unequivocally the persecution of Christians and other minorities around the world,” it was also “vital that concrete action is taken.” States must ensure people are free to practice their religion and diplomatic pressure must be applied to ensure that no country “accidentally or deliberately, supports the persecution of anyone for their religious belief.”

This was not a task for political leaders alone, he said, and he argued that religious leaders such as himself had to “up their game” and set an example through dialogue and communication with each other, and be prepared to hold each other to account. “This requires honest and robust relationships between religious leaders, not platitudes, however well-intentioned. Such relationships involve encouraging each other actively to protect minorities and to challenge those who seek to exploit differences.”

On Saturday, Punjab’s Chief Minister, Shahbaz Sharif held a reception to pay tribute to the many police, rescue and medical staff who responded to the attack, saying that by their “noble example” they had saved many lives and had become “heroes of the nation.”