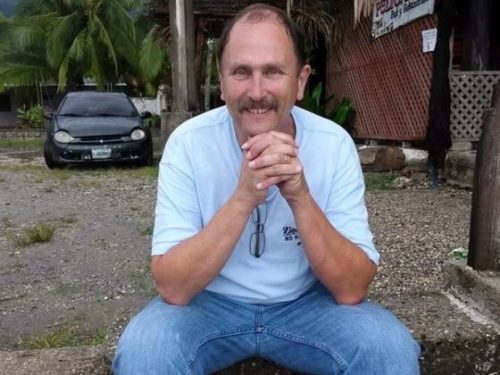 [Episcopal Diocese of Maryland] The Rev. Wes Wubbenhorst, an Episcopal priest, died March 15 after a year-long battle with lymphoma. He was 62.

Wubbenhorst died at his home in Annapolis, Maryland. He was in the care of his wife Vivienne, his mother Arvilla and many other family and friends. A Requiem Eucharist is set for Saturday, March 19, at 1 p.m. at Cathedral of the Incarnation, Baltimore. (The service will be livestreamed on the internet. The video link will be available at www.episcopalmaryland.org).

The Rev. Allen Spicer, chaplain to clergy and their families in the Diocese of Maryland, visited Wubbenhorst on the afternoon of his death. Those gathered sang hymns at his bedside. Wubbenhorst was unable to speak but as the words, “I will raise him up” from “I am the Bread of Life,” were sung, he raised both arms high. He was raised to new life only hours later.

Wubbenhorst was the diocesan youth minister in Maryland for 10 years. He also served at St. Margaret’s, Annapolis, as well as parishes in the dioceses of Newark and Connecticut. His ministry with young people flourished when he was chaplain and assistant director of the Episcopal Camp and Conference Center at Ivoryton, Connecticut from 1990 to 1994. He also served on the support staff of the Episcopal Church Foundation in New York City after his ordination in 1989.

His last call was to be interim rector at Christ Church, Port Republic, Maryland, described by many as “a match made in heaven. It was a time of joy and growth for both priest and people. They loved Wes through the chemotherapy treatments and were blessed by his joy and enthusiasm for life.”

Wubbenhorst and his wife spent time in Honduras as Peace Corps volunteers after college. It was there he heard a voice calling him to the priesthood. For several summers Wubbenhorst took hundreds of young people from Maryland on mission trips to El Hogar de Amor y Esperanza, The Home of Love and Hope, orphanage in Tegucigalpa. Those trips changed many lives.

“More than being one of the most effective leaders in youth ministry in the larger Church, my friend Wes Wubbenhorst was a joy-filled human being who had an infectious faith in Jesus,” said Bishop Eugene Taylor Sutton of Maryland. “Once when I asked a group of high schoolers what they wanted to do after graduation, I heard this from several of them: ‘I want to work in a ministry that focuses on youth in a diocese or a church – just like Wes!’ Those words put a lump in my throat, and a joy in my heart.”

“I’m one of those youth who said I wanted to do what he did, and he made it so,” said Kate Riley. “I will forever be grateful for his gifts to the world, but mostly just that fact that I got to know him as a dear friend and father figure. He is one of a kind and now it is our ministry to carry on that joy for Jesus.” Kate succeeded Wubbenhorst as youth missioner a year ago. She called him “a man who could never be forgotten. He has been the inspiration for hundreds of people to seek a relationship with Jesus Christ and to serve in our church to bring the Kingdom of joyful noise to Earth!”

Wubbenhorst had several ministries. He was passionate about working with Latino immigrants, helped develop workshops for prevention of domestic violence and led safe church trainings.

Wubbenhorst wrote a last sermon that friends and family posted on Facebook six days before his death to raise money for El Hogar. “Honduras and its people were God’s way of communicating a plan, a path, and lifelong love to me,” he wrote. “Amazing trips, LOVE & HOPE shared in God’s name! Nothing is better than God’s Love. (WOW!)”Wubbenhorst was known for his whistling, his verbal clicks of the tongue and audible punctuation with words like, “ta-dah” or “Wow!”

During the summer mission trip of 2009 there was a military coup in Honduras, recalled the Rt. Rev. John Rabb, retired bishop suffragan of the Diocese of Maryland. “Nervous parents called the (diocesan) center and it was not a problem to assure them that I would want no one other than Wes because Wes, for all of his creative energy (translated “loosey goosey”) had full control when the situation got difficult,” said Rabb. “It did not matter if it was discipline, health, safety or in this case a political crisis; Wes knew exactly what to do and did it. The youth mission trip returned and all were well and the parents, especially, saw how well cared for their youth were.”

Wubbenhorst also had a heart for the poor in Baltimore. One day he showed up at the office with a handful of brown bag lunches. He had driven from his home in Annapolis but did not encounter the usual homeless men and women — many of whom he knew by name — along his route. He put the lunches in the refrigerator for the return trip.

“Wes was a person of unique and extraordinary gifts who conveyed the deep love and joy of God to everyone he met: old and young, poor and rich, weak and strong,” said the Rt. Rev. Mary Glasspool, bishop suffragan in the Diocese of Los Angeles. “He did this with his very being, which was light-hearted, quick to laugh, humble in nature and profound in faith. His special love for young people has effected thousands and I believe he has left a legacy of ‘joy and wonder in all God’s works’ that inspires us all into the future,” she said. Glasspool was rector at St. Margaret’s, Annapolis, when Wubbenhorst was associate rector.

Wubbenhorst was also a doodler. His goodbye gift for each diocesan staff member was their own personal doodle of their name. On the reverse of each was a recipe for his infamous oatmeal cookies which he often brought to the office. (They didn’t last long). But he explained the doodle on the front with this: “As you may or may not know Jesus was an amazing doodle. He found that they were ways of sending JOY, LOVE, HEALING, and Blessings. So Naturally all doodles begin with God’s creation, YOU Yeah!!” [sic]

He ended the recipe with, “p.s. This was Jesus’ favorite cookie.”