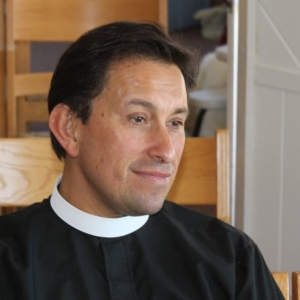 Gutierrez was elected on the fourth ballot, receiving 100 votes in the lay order and 133 in the clergy order. On that ballot, 84 lay votes and 130 clergy votes were need for an election. The electing convention met at Philadelphia Episcopal Cathedral.

“With joy and thankfulness to God, we announce that the Rev. Canon Daniel G. P. Gutierrez has been elected bishop diocesan of the Episcopal Diocese of Pennsylvania. He brings unique gifts to this ministry of leadership and pastoral presence in a time of change. We look forward to our shared ministry and commitment to serving Jesus Christ in this diverse and dynamic diocese,” the Rev. Katherine Andonian, chair of the Diocesan Standing Committee and the rector of Church of the Holy Spirit, Harleysville, said in a press release.

Gutierrez said in the same release:  “I give thanks to Christ, through Him, all things are made new. We begin a new and hopeful journey in this beloved place. I am humbled and grateful that you have allowed me into your lives. I will never take for granted this sacred trust you have placed in me. I offer myself to you as a loving shepherd, caring servant, and faithful sojourner.

“My excitement is in you and the possibilities to come. We have numerous gifts in this diocese and together we will build the Kingdom of God, hand in hand, hand by hand. Let’s work together so the Diocese of Pennsylvania is known as the ‘come and see’ diocese. A place we encounter God through prayer, community, liturgy and service. Where we lift the dignity of humanity and show how we love one another. A place where Christ is reflected in one another.”

Harmon and Wolfe withdrew after the second ballot. The results are here.

The diocese has been led since early 2013 by former Diocese of East Carolina Bishop Clifton Daniel III as its bishop provisional. Daniel resigned from his East Carolina post to work in Pennsylvania. The need for a provisional bishop arose after Pennsylvania Bishop Charles Bennison retired at the end of 2012 after an at times contentious episcopate. The Pennsylvania Standing Committee had been at odds with Bennison since the mid-2000s over concerns about how he managed the diocese’s assets and other issues.

Gutierrez is canon to the ordinary, chief operating officer, and chief of staff for the Diocese of the Rio Grande, which is based in Albuquerque, New Mexico. He also serves as executive director of the diocesan conference and retreat centers, and he oversees all aspects of ministry, human resources, budgeting, funds and investments, and capital campaigns within the diocese. He also serves the Episcopal Church through administrative and budgetary oversight of the Navajoland Area Mission and is vice president of the Episcopal Church in Navajoland Economic Development Corp.

Before Gutierrez was named to his current position in 2011, he had an extensive career in public service — including serving as chief of staff to the mayor of Albuquerque and as director of the Bernalillo County Economic Development Department. He also was president of a strategy and media firm whose clients included state and local political leaders.

Gutierrez was ordained to the diaconate and the priesthood in 2008, both in the Diocese of the Rio Grande, and subsequently he served at the Cathedral Church of St. John and at St. Michael and All Angels Church in Albuquerque. After joining the diocesan staff, he was called to rebuild two struggling parishes, serving them as vicar and rector.

He is a graduate of the University of New Mexico, where he earned bachelor’s degrees in history and political science in 1987 and a master of arts in public administration in 1992. In 2007, he earned a diocesan certificate in Anglican studies through the Trinity School for Ministry, and in 2011 he was awarded a master of theological studies degree from St. Norbert College.

Gutierrez has been married since 1991 to Suzanne Fletcher Gutierrez, and they have one son, Jude, in high school.

The Diocese of Pennsylvania is the second oldest diocese in the Episcopal Church. This historic diocese is composed of 135 worshiping congregations located in the southeast portion of the state, throughout Philadelphia, Bucks, Montgomery, Delaware, & Chester counties.

Editor’s note: A previous version of this story incorrectly stated that Diocese of Pennsylvania Bishop-elect Daniel Gutierrez is the first U.S.-born Latino to be elected as a bishop diocesan in the Episcopal Church. In fact, the Rt. Rev. Victor Rivera, who was born in Puerto Rico, served from 1968 to 1989 as the third bishop of the Diocese of San Joaquin and the Rt. Rev. Maurice “Ben” Benitez, born in Washington, D.C., was the sixth bishop of the Diocese of Texas, serving from 1980 to 1995.