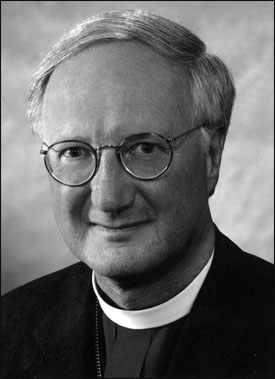 [Episcopal News Service] Diocese of Pennsylvania Bishop Charles Bennison told the diocese Oct. 9 that he would retire from office at the end of the year.

Bennison said in a letter to the diocese that the Rev. Ledlie I. Laughlin, president of the diocesan Standing Committee, told him that the committee wanted to elect a provisional bishop rather than either have Bennison call for the election of a coadjutor or have the diocese elect a diocesan who would be consecrated on the day of his retirement.

Bennison, 68, could have continued to serve until November 2015, when he turns 72, the church’s mandatory retirement age for all clergy.

“I believe that the interests of the diocese are best served if the process envisioned by the Standing Committee begins sooner rather than later, and therefore I have informed the committee that I will retire on December 31, 2012,” Bennison wrote. “I will do so in the confidence that my work is done.”

The Pennsylvania Standing Committee has been at odds with Bennison since the mid-2000s over concerns about how he managed the diocese’s assets and other issues.

Laughlin, who is the rector St. Peter’s Church in Philadelphia, wrote in a second letter to the diocese that the Standing Committee had decided in consultation with Bishop Clayton Matthews, head of the Episcopal Church’s Office of Pastoral Development, that “the best interests of our diocese will be served by the prompt election of a provisional bishop.” A provisional bishop exercises the full authority of a diocesan bishop but is elected to serve for a set period of time, generally as an interim between bishops, Laughlin explained in his letter.

Matthews, a member of the presiding bishop’s staff, assists dioceses through pastoral transitions and the election of bishops. He already is working with the diocesan committee to identify possible candidates for provisional bishop, said Laughlin, who predicted that a special electing convention would be held in early 2013.

“Looking ahead, please be assured that the Standing Committee intends to engage other diocesan leaders in decision making, work in close consultation with the office of the presiding bishop and provide timely communication to the entire diocese so all of us may be fully engaged in this vital next chapter of our common life,” he wrote.

Bennison summarized the state of the diocese in the letter, saying that its congregations had attracted “outstanding clergy” and that the cathedral dean and chapter had made “remarkable progress” with a cathedral development project.

“The members of the diocesan staff are outstanding in their skill and dedication. Wise, visionary and committed leaders – clergy and lay – serve our diocesan ministries and governance bodies,” he wrote. “Our diocesan financial house is in the best order ever.  The bonds of unity within the diocese and with the Episcopal Church are strong.  Our witness to Christ’s love and to social justice remains undiminished.”

He told the diocese that he would “always be profoundly grateful” for what he called “the privilege and joy of serving as your bishop.”

“I have loved my work, and I have loved each of you” Bennison concluded. “Please pray for me, and know of my prayers for you. May the love of Christ hold sway in all our hearts now and always.”

During Bennison’s tenure, the Standing Committee called for his resignation more than once, including on the day he returned to work in August 2010 after the church’s Court of Review for the Trial of a Bishop overturned a lower church court’s finding that he should be removed from ordained ministry because he had engaged in conduct unbecoming a member of the clergy. The review court agreed with one of the lower court’s two findings of misconduct, but it said that Bennison could not be deposed because the charge was barred by the church’s statute of limitations.

The review court said that Bennison failed to respond properly in the mid-1970s when he was rector of St. Mark’s Episcopal Church in Upland, California, and learned that his brother, John, who worked initially as a lay youth minister in the parish, had been having a sexual relationship with a member of the youth group that began when she was 14. John Bennison later was ordained a priest but deposed in 1977 for an unrelated offense. He was restored to the priesthood in 1980, but he was forced to renounce his orders again in 2006 when accusations of his abuse became public.

Presiding Bishop Katharine Jefferts Schori inhibited Charles Bennison in October 2007 from exercising his ordained ministry when the church’s Title IV Review Committee formally accused him of the inaction. The inhibition expired with the review court’s decision.

In September 2010, the diocesan Standing Committee asked the House of Bishops for its “support and assistance” in securing Bennison’s retirement or resignation. The bishops later that month called for Bennison’s “immediate and unconditional resignation.” The next day, Bennison refused to resign and has remained the diocesan bishop.

The bishops and deputies who gathered in Indianapolis in July for the 77th meeting of General Convention made a historic statement about the relationship between bishops and dioceses, acknowledging that, on rare occasions, that relationship becomes severely strained, sometimes to the point of breaking.

The convention, by way of Resolution B021, set up a canonical process for reconciling or dissolving an episcopal relationship.

Resolution B021 was the result of a call (via Resolution B014) from the 2009 meeting of General Convention about how to help dioceses and bishops resolve their differences.

The process convention agreed to is akin to the mechanism for a parish that finds itself in serious conflict with its rector (Title III.9.12-13). It was be added to the “Of the Life and Work of a Bishop” canon of Title III, the church’s policies regarding ordained ministry, and became effective Sept. 1.

According to what is now Section 9 of that canon, it is intended for use when the relationship between a diocese and its bishop, bishop coadjutor or suffragan is “imperiled by disagreement or dissension” to the point where the bishop, two-thirds of the standing committee or a two-thirds majority vote of the diocesan convention deem the issues to be serious enough to invoke the process.

The Pennsylvania diocese is scheduled to gather Nov. 10 for its 229th annual convention. As of the day of Bennison’s announcement, no formal resolution had been filed concerning activating the new canon. The Standing Committee had met monthly, as is typical, since General Convention. While the members discussed the new canon, there had been no announcement about whether the committee would vote to begin the mediation-dissolution process.

Laughlin said in his letter that the standing committee was making plans to honor Bennison’s tenure at the convention.

The Rev. Mary Frances Schjonberg is an editor and reporter for the Episcopal News Service.